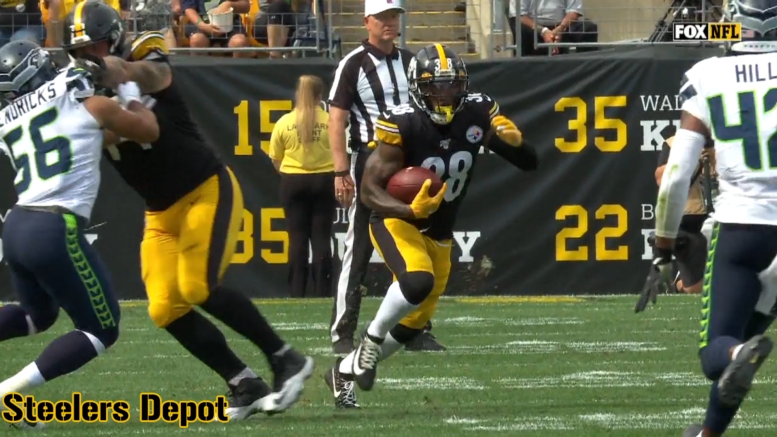 Fresh off by far his best game of the season, on the ground at least, AFC Offensive Player of the Week James Conner is working his way through a shoulder sprain suffered late in his 145-yard effort for the Pittsburgh Steelers against the Miami Dolphins. Their rookie back, Benny Snell, left that same game with a knee injury. At this stage, their availability for the game against the Indianapolis Colts is not clear.

Re-enter Jaylen Samuels, the second-year back who filled in admirably for Conner over a three-game stretch late last season. While he practiced all week, the Steelers held him out of the Dolphins game, but Mike Tomlin said that he has a clean bill of health, and the back confirmed as much himself.

“I feel good”, he told Teresa Varley for the team’s website. “I feel fine, 100 percent. I am just ready to go this week”.

Samuels originally suffered a knee injury against the Baltimore Ravens, which required a knee scope, and his timeline for return was set to be about a month. He likely could have played on Monday, but is now amply ready for action once again after missing the past two games, and the past three weeks thanks to the bye.

“We’ve got the depth in the running back room to handle the situation we are going through”, Samuels allowed, though if both Conner and Snell miss the game, that leaves only Trey Edmunds, and fullback Roosevelt Nix in an emergency. “I believe in everybody. I believe in this team, the o-line, the running backs and the coaches. If we all believe in each other and execute we’ll be good”.

They did execute in Week 15 last year against the New England Patriots with Samuels as pretty much the only ballcarrier. On a career-high 19 carries, he churned out 142 yards on the ground. He also added another 30 yards on two receptions. Another performance like that certainly wouldn’t be untimely.

Nor is the timing of his return. While he said that he was at about 95 percent last week, and that he “could have played, but [he] just wanted to be cautious”, it at least gave the team the opportunity to preserve one healthy back on a night on which they lost two.

Tomlin did say during his press conference earlier today that for Conner, now in his third year, he would feel comfortable with him being able to go into a game with only limited practice time, essentially awarding him that veteran courtesy. It’s possible he could dress as an emergency back, while Samuels is featured.