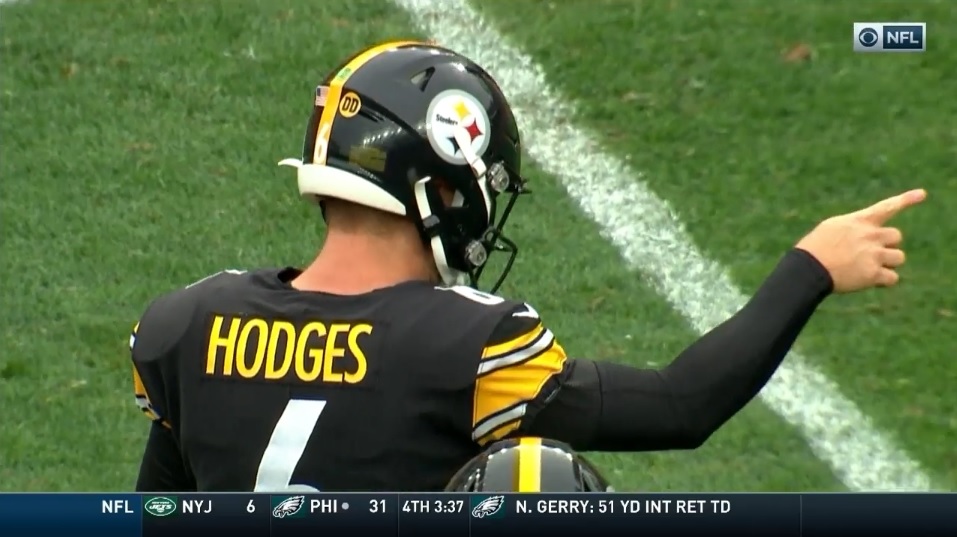 While it’s not quite set in stone just yet, the Pittsburgh Steelers are beginning their week of practicing anticipating that Devlin Hodges, the college free agent rookie out of Samford, will be under center for the offense this coming Sunday as they prepare to face the Los Angeles Chargers.

Initially failing to make the 53-man roster, Hodges was signed to the practice squad after the Steelers traded Joshua Dobbs following the first game, an then promoted to the 53-man roster after Ben Roethlisberger was placed on the Reserve/Injured List a week later. Three weeks hence, he made his NFL debut on Sunday against the Baltimore Ravens, completing seven of nine passes for 68 yards with a 21-yard scramble, leading a touchdown drive after coming in cold following Mason Rudolph’s injury.

He didn’t initial get his opportunity—his college coach recently even talked about how it wasn’t so long ago that they were trying to figure out how to get him into the XFL or the CFL—but what he always had was the respect of his teammates and the coaching staff, as exhibited in the extensive playing time that he was afforded during the preseason.

Running back James Conner will be one of Hodges’ key weapons on Sunday, assuming that he does indeed start, and he talked about the rookie quarterback earlier this week during his radio show that he holds on The Fan.

“He got limited reps. He did good for stepping in”, he said of his young teammate. “Part of being a professional is being ready and preparing throughout the week so that when your number is called you can step up to the plate. Duck has that personality. He has that mentality where he doesn’t have anything to lose. He’s overcome the odds, from the school he came from and just his background. He handled himself well. I thought he stepped up, and we weren’t out of it when he came in, so I’m proud of him”.

Hodges was certainly far from flawless—he actually threw an ill-advised pass that was intercepted, but was fortunately negated due to a holding penalty in the secondary, the play on which Tony Jefferson was lost for the season for the Ravens—but he showed a lot that his teammates and coaches believe they can work with.

Unlike when Rudolph had to step in after halftime in Week Two, Hodges had to come in completely cold right after the second-year quarterback went down, continuing a pre-existing drive. Rudolph had just completed a third-down pass, and his backup was able to come in and finish that drive with a one-yard rushing touchdown from Conner.

Teammates had suggested that he didn’t get any first-team reps leading into the Ravens game, and little if any since being promoted to the 53-man roster, so this will be a big week of practice for him as he works with first-team personnel really for the first time all year.