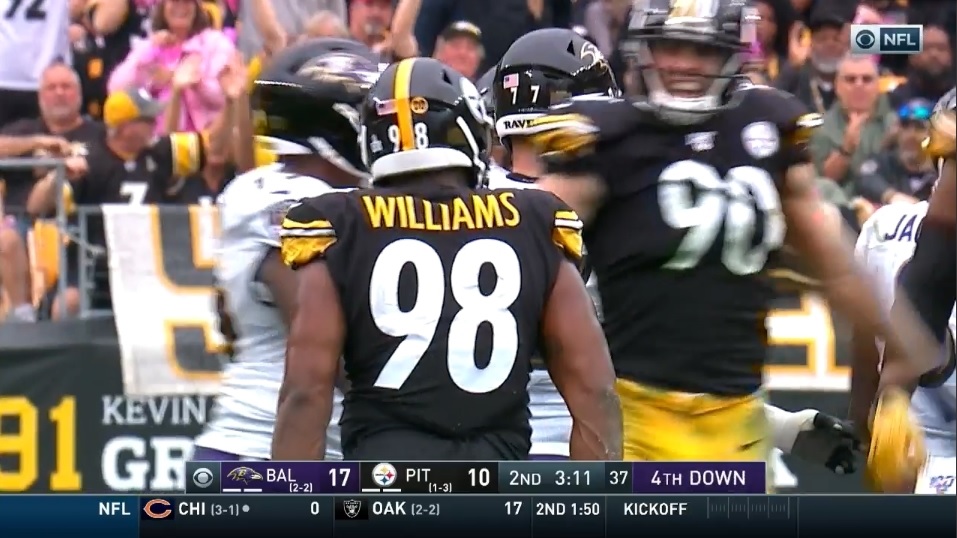 Football is a lot like life and sometimes in life people grow bored of what is most comfortable to them and choose to escape their comfort zone. Whether it is a new toy, partner or job, humans are always searching for an upgrade in hopes of improving their lives. Occasionally though, we discover that this new upgrade is not so much of an upgrade at all and the Pittsburgh Steelers can relate to this feeling as Mark Barron, one of their newest acquisitions, has been the complete opposite of an upgrade.

The Steelers, like many of us, found out that their new dance partner was not at all what they expected but luckily for them, an old friend was close by. That old friend’s name is Vince Williams. The seven-year veteran returned to the field last Sunday and was thrusted back into the spotlight after Barron left with an injury. It was just like old times but even better as Williams put on an absolute defensive clinic, recording nine tackles, one sack and one pass deflection.

Make no mistake about it, the Steelers were reminded that sometimes the grass is not always greener on the other side as Williams displayed a few old tricks while also showing off some new ones.

It is no secret that Williams is great against the run, it is his biggest strength but just in case anyone forgot, the veteran linebacker made sure to remind everyone last Sunday. Williams blows up the handoff by taking out not one but two of the Baltimore Ravens’ lead blockers. The icing on the cake is the fact that Williams not only goes through Bradley Bozeman and Nick Boyle but that he is also able to wrap up Mark Ingram for a loss as well (though T.J. Watt is also credited with half of a tackle on this play). This is one of those plays where it’s possible to say that one player single handedly made the difference.

If defending the run is Williams’ first superpower then getting after the quarterback is certainly his second. Since 2017, only one inside linebacker has recorded more sacks than the Steelers’ inside linebacker as Williams (13.5 sacks) only trails Detroit’s Devon Kennard by half a sack since 2017. Williams notches his 13th and a half sack with a perfectly executed stunt by looping into the B gap and taking down Lamar Jackson.

Whoever said you cannot teach an old dog new tricks has obviously not met Vince Williams. While dropping into coverage has never been his strong suit, Williams surprised many with his new trick last Sunday as he dropped into coverage and not only was he not a liability but he also happened to make a key play. Williams has one on one coverage with Boyle on the play above and records a diving pass break up. This pass break would be key as it would eventually force the Ravens to punt out of their own end zone, leading to a go-ahead field goal by Chris Boswell.

The Steelers’ defense looked like a different unit with Williams out there and it showed both on tape and on paper. The Steelers found out the hard way that the grass is not always greener on the other side but luckily an old flame was still within reach and Williams played his way back into the hearts of the fanbase and defense with an amazing performance last Sunday.