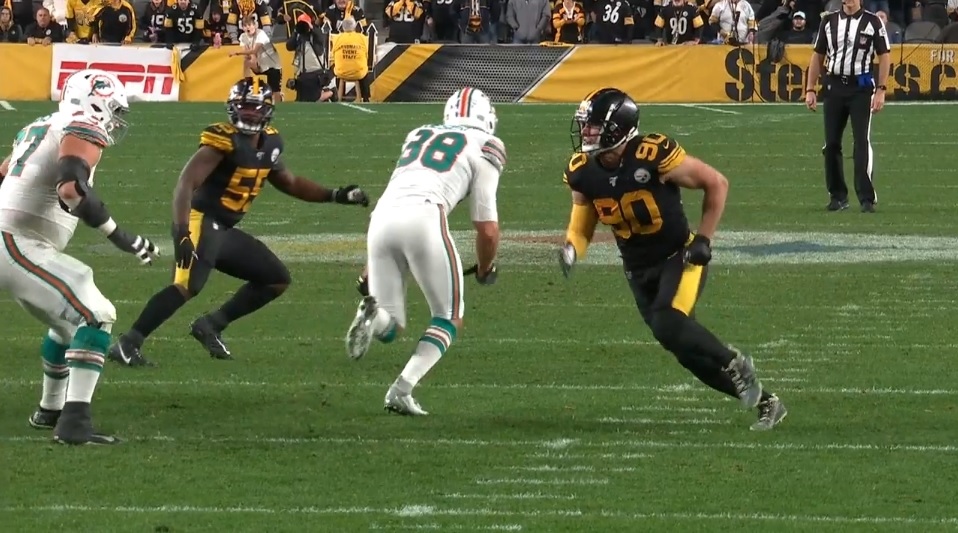 TJ Watt continued his dominance Monday night. Two more sacks, giving him six on the year, with a pair of forced fumbles, one of which he recovered.

At this point in his career, it’s fair to call him an elite player. What’s taken him over the edge from very good to one of the league’s best is his hand use and pass rush IQ. It’s the same approach he talked about in the offseason. A plan that’s simple but effective. He attacks tackles in two ways.

1. Start with speed. Threaten the edge early and force the tackle to set wide.
2. Once the tackle begins to cheat on the speed/outside rush, counter inside with power

That was set up and executed Monday night versus Dolphins’ right tackle Jesse Davis.

This is Watt’s second rush of the night (he actually opened with an inside spin). Attacking Davis, again the right tackle (#77), half with with an outside rush. Rip and dip to beat him to the edge, forcing Ryan Fitzpatrick to climb the pocket. Steps up into pressure though Fitz is able to complete the pass for a first down.

A mild pressure from Watt, doesn’t get home, but again, he’s setting this rush up to win later in the game.

Later in the first half. 3rd and long. Watt has his hand in the dirt, something he does often since it’s a little more natural for him, and he explodes off the ball. Davis has to fly out of his stance, completely opening up his hips, to try and seal the edge. He did have RB help here and Watt ultimately doesn’t get pressure but he’s threatening his explosion. And Davis knows it. Watt is the better athlete, is capable of turning the corner, and is showing that off.

Moving forward to the second half. Watt hand down again. Threatens wide with his initial steps. Davis begins to sit wide to sit on the speed rush. Watt sees him cheat and counters inside. Plants his outside foot on his third step, swimming over Davis at the same time. Hands and feet working together.

Wins cleanly and forces Fitzpatrick to get rid of the football for a short gain in the left flat.

Couple possessions later. Watt again looks to threaten upfield, getting Davis to open his hips and basically turn square to the sideline. As soon as he opens the gate, Watt counters inside, swimming over top of him again. Punch with the inside hand to gain control of the tackle, then leverage him by swimming over. Gets after the ball and rips it out of Fitz’s hands for the turnover.

Pass rushing is a chess match. Not only is it about executing what you do well as a rusher but reading how the tackle is setting you and what tool you have in your arsenal to counter. Just like an offensive coordinator, it’s about using one rush or technique to set up another later in the game.

Watt’s able to combine all those things. He wins in a variety of ways. Speed rush. Rip. Speed bull rush. Arm-over as an inside counter. He’s even throwing a spin move that works inside or outside (but has been more effective inside). There’s no way tackles can sit on any one move. They have to sit and react to him which gives him the upper hand and makes him a playmaker in this defense and their biggest threat.