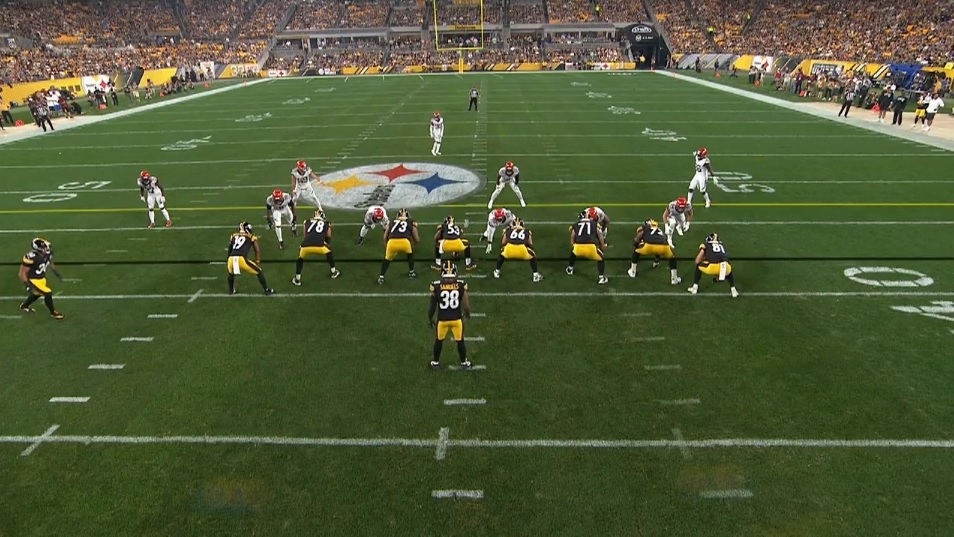 It’s one of my favorite lines from Boiler Room, my favorite movie I’ve ever watched. In it, Ben Affleck is motivating a young sales team.

The old Steelers’ playbook? Gone. At least for Week 4. What we saw was something rarely used in Pittsburgh, save for the Mike Vick/Chargers game. Something about primetime lights with a backup quarterback causes the Steelers to throw caution to the wind.

But Fichtner, coming off one of his worst playcalls against the San Francisco 49ers, did a terrific job versus the Cincinnati Bengals. He used motion to create energy, and more important, leverage, to win in the run game. Let’s check it out.

With the play being a quick hitter to the edge, the end isn’t going to have the athleticism to make the tackle in space. So let him go, have one fewer guy to block up, and let your tackle take on the LB who could make a play on the perimeter. 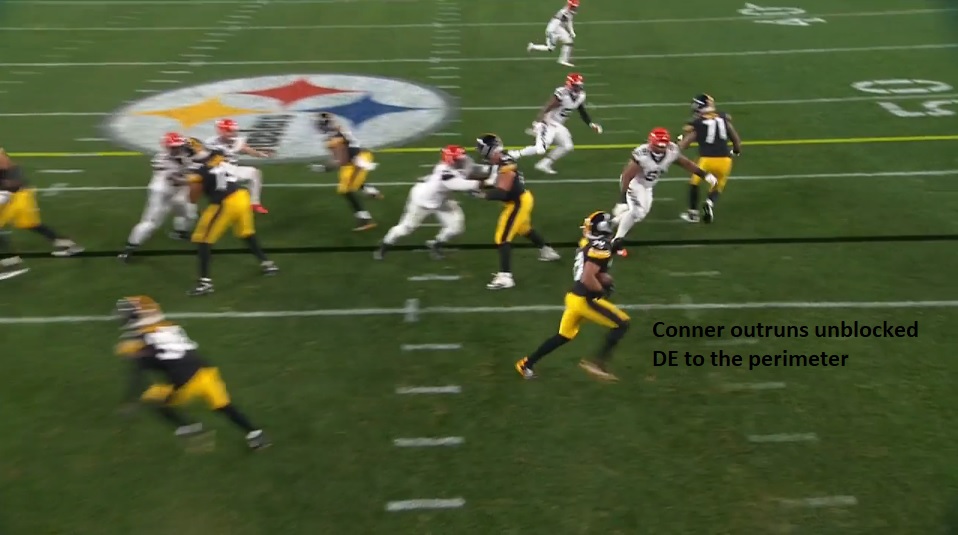 Play goes for five yards and a first down. The other point to note? Because this is a pitch, not a handoff, it counts as a pass. So if it’s a bad exchange, it’s an incompletion, not a fumble. Smart move.

Let’s check out a pass. Again, Fichtner with the use of motion. Bring JuJu Smith-Schuster right to left and the corner follows, signaling man coverage. Boot away from the motion, have the option to shovel to JuJu, but hit Jaylen Samuels wide open in the flat. Bengals have struggled to cover that area, as we noted in our scouting report, and the linebacker (#55) can’t recover to get to Samuels in time. Completion, first down. Simple, efficient, and using motion and space to create leverage.

And here’s the touchdown to Conner. Motion Diontae Johnson across. Shovel option again with Johnson in the flat and Conner leaking out behind. Gets the defense moving downhill and they lose track of Conner, who catches it for a first down and takes care of the rest into the end zone.

Lot for the defense to process here, lot of outlets they gotta cover, but it’s a simple triangle read for Rudolph. All to one side of the field. Well-schemed and executed.

Now watch how motion creates lead blocking. Align James Washington as the wing and have Conner follow behind with down blocks to the frontside.

Washington barely ends up making contact with the safety but it forced the defender to sit back on his heels instead of attacking the alley downhill. Another first down and successful play.

Finally, Jaylen Samuels’ score. I don’t know if there’s a designed read here considering how high Conner raises his hands but the defense doesn’t know that. Or at least, they don’t have time to react. This puts the safety, #30 Jessie Bates, in conflict. Does he attack Conner on the perimeter as the lone defender on the edge? Or bank on Samuels keeping it?

He’s caught in-between, can’t make the tackle, and it’s all the space Samuels needs to cross the goal line. Touchdown.

It looks complicated and chaotic for the defense but it’s simple for the offense. Quick reads, decisions, get the ball outside and then plant downhill. Like San Fran in Week 3, Fichtner did well to use one play to set up another and constantly keep the Bengals on their toes. They didn’t know where the ball was going and always chasing after it, instead of knowing where it was going and attacking.

In Boiler Room, Affleck ended his speed this way.

“A sale is made on every call you make…the only question is, who’s going to close? You or him?”

Monday, Randy Fichtner made the sale. And closed the books on the Bengals’ season.