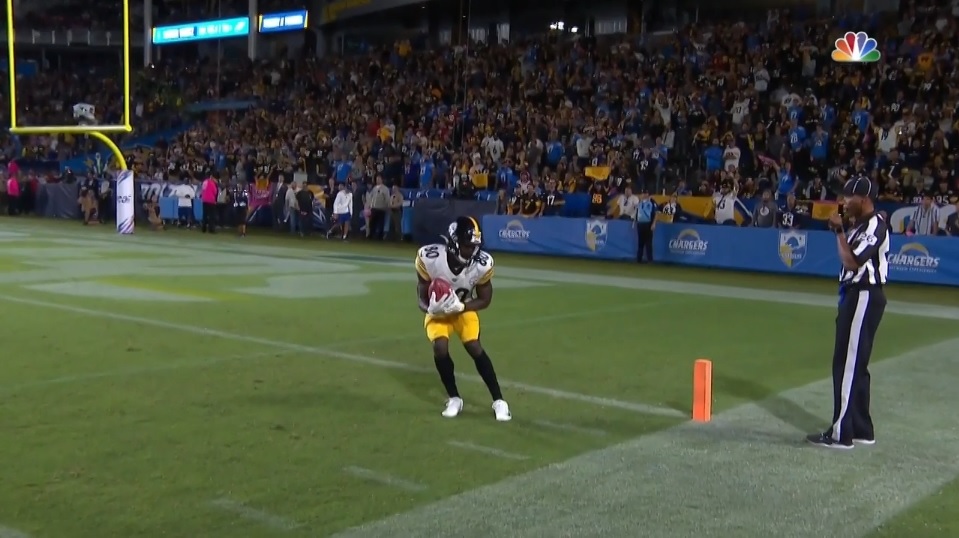 Johnny Holton is still searching for his first reception of the season. While that catch remains elusive, he’s done a good job on special teams and turned in his best performance of 2019 against the Los Angeles Chargers. He played like vintage Darrius Heyward-Bey and had a serious impact on the Steelers’ punt game.

Jordan Berry’s first punt of the game. Beautiful 59 yard punt with excellent hangtime. Holton, bottom of the screen, wins his one-on-one matchup and has the speed to meet the returner, even able to slow up towards the end. Nice use of his inside hand to get past the jammer, just as a WR does running a go route on offense. Technique translates.

So it turns out to be a 59 yard net punt. Which make no mistake, is an awesome number. In fact, it’s tied for the third best net of Berry’s career (and one of those came off a bounce). This is flipping the field. Punting from your own 20 and the opposition starting at their 21. Big time play, Devin Bush scooped and scored on the Chargers’ drive, and the Steelers began building their lead. But it all started with that punt and Holton’s ability to force the fair catch.

Later in the game. Holton singled up on just a lone jammer again. Wins cleanly inside, forces another fair catch. Justin Layne got down there too but you can see Holton got off the line much quicker the whole way through. Chargers again pinned deep, starting on their own nine.

The lone Chargers’ return we’re talking about here. Great contain by Holton, coming in from the left side of the clip below. Able to “keep the cup,” not letting Dez King break contain and get to the outside. Forces him to slow up, cut upfield, and into the teeth of the return team. 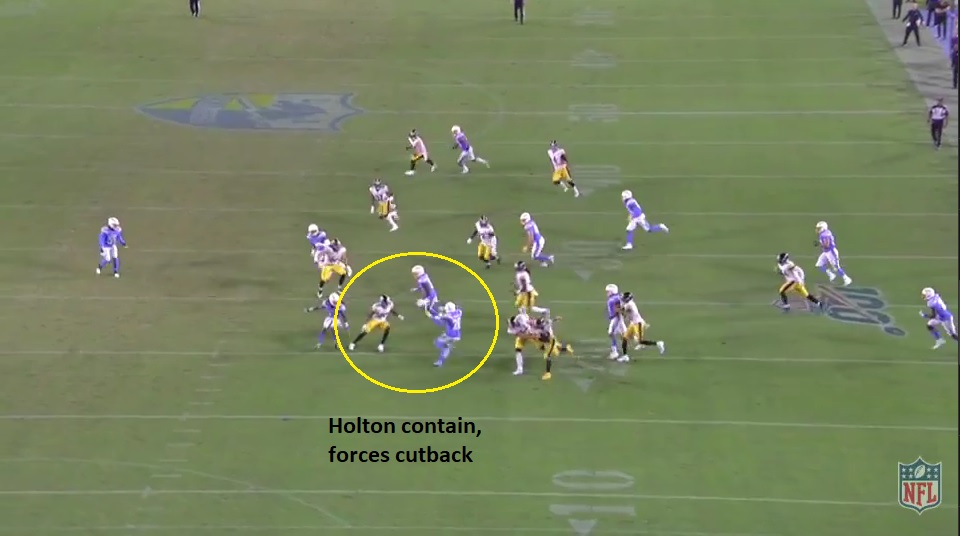 Just a seven yard runback, Holton getting in on the tackle, and the Chargers again have poor field position, working at their own 21.

And finally, the last punt of the day. Berry with a one-step, directional punt, pinning it to the sideline. Holton wins his matchup and finds the ball, downing it at the one. 99 yards to go for the Chargers if they want to tie things up. Philip Rivers threw a pick on the second pass of the drive.

If you’re not making an impact on your side of the ball, you better do it on special teams. That’s been Mike Tomlin’s mantra for a long time. Though Holton hasn’t been able to catch a deep pass this season, it’s been frustrating how many missed chances there’s been, he stepped up at gunner Sunday night.