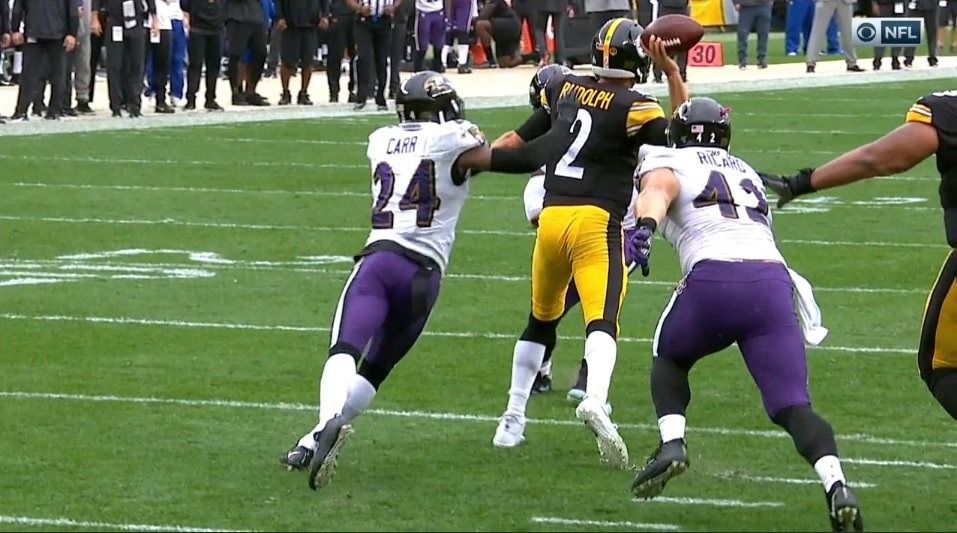 The Pittsburgh Steelers lost yesterday’s game, sure. But that paled in comparison to the gruesome sight of quarterback Mason Rudolph going limp after taking a shot to the head from Baltimore Ravens safety Earl Thomas and subsequently banging his head, for a second time, on the ground upon impact.

The second-year quarterback, who was making his third career start in place of the injured Ben Roethlisberger, remained on the ground for several minutes, but ultimately regained consciousness. He was able to be communicative and responsive, ultimately walking, with assistance, under his own power off the field and into the tunnel, where he would be transported to a local hospital.

Made a gif that includes both angles of the Thomas hit on Mason and I think you will see that while he was rightfully flagged and should be fined, he shouldn’t have been ejected. #Steelers pic.twitter.com/FqDJsdzdJp

“I was just trying to get to the ball and make a play for my team”, the safety told the Ravens’ website. “I hit the strike zone, I didn’t go high. I didn’t try to intentionally hurt him. I’m worried about him. I heard he’s at the hospital and my prayers go out to him and his family”.

Thomas said that he hoped he would not get fined for the play, saying that it “was a football play” and “wasn’t dirty”, and noted that he was sandwiched between himself and Brandon Carr on the play. He called the flag being thrown “understandable” after the officials saw the seriousness of the play.

Rest assured, though, that he will be fined, and what he did was a penalty even if Rudolph bounced right up.

“But I’m never trying to hurt anybody”, the veteran safety added, who saw his 2018 season end with a broken leg. “At the end of the day, guys have families. I would never try to intentionally hurt him. I was just trying to fly to the ball like I normally do”.

This was his first game in the Steelers-Ravens rivalry, but he probably delivered one of the ugliest blows in the series in years, concussing the young quarterback, which will almost surely result in him missing time, though the team fortunately at least has a bye week following their Week Six game against the Los Angeles Chargers.

Past games, particularly from the mid- to late-2000s, were littered with big, nasty hits, many of which would now be illegal under today’s rules, or flagged under today’s enforcement of existing rules at the time. Yesterday’s game, though, was probably about as physical as the series has gotten in recent years, and not just because of the Rudolph hit.

“I quickly went over to his teammates and said, ‘hey bro, I did not mean to do that. That wasn’t intentional at all, I’m just trying to make a football play’”, Thomas also told the Ravens’ website, though it’s worth noting that he never actually went up to Rudolph himself. Perhaps he will reach out to the quarterback at some point this week, or at least when they meet again in Week 17. Hopefully that game will actually hold some relevance.