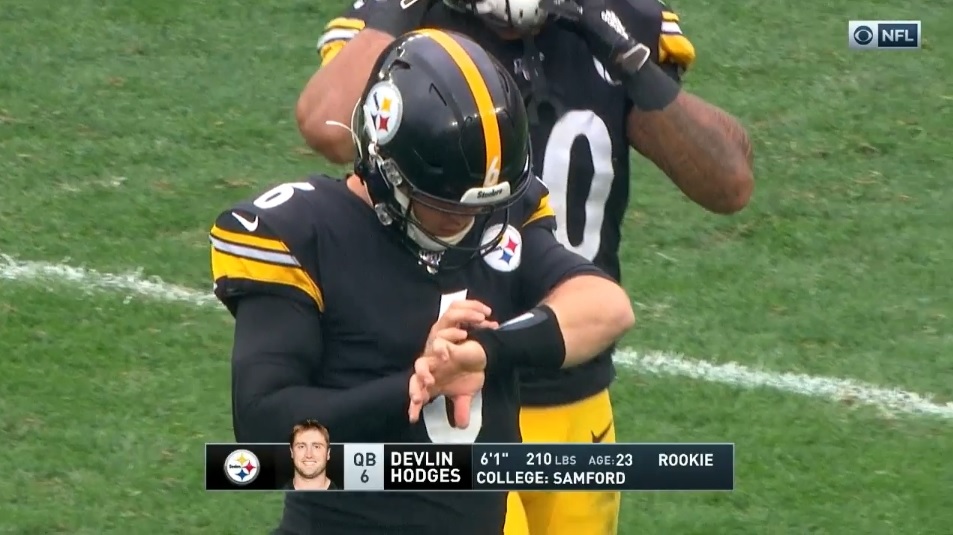 We know there aren’t many reps to be handed out to backup quarterbacks. Especially when the starter is making his first set of starts as Mason Rudolph has been throughout the season. There is no “off” day the way there was with Ben Roethlisberger, who would sit out Wednesday and let the backup have a chance to run the show.

So ok, Devlin Hodges didn’t see any work last week with the 1’s. There’s always the scout team, right? A chance to get some reps, even if they’re just providing looks for the defense and simulating the opponent.

Nope. Hodges didn’t get those either. Because they were playing the Baltimore Ravens, Taryn Christion was brought in to simulate Lamar Jackson’s mobility and style.

Hodges was essentially left with table scraps and when he made his debut Sunday following Rudolph’s concussion, he was coming in as any quarterback will this season.

“Honestly, I got no reps with the team or with the 1’s,” Hodges told reporters Wednesday, linked below. “Honestly, I didn’t even get [any] reps with the scout team last week. We brought in a guy to be Lamar Jackson. Got some 7 on 7 reps.”

7 on 7 reps. That’s it. Which, if you’re not familiar, is hardly even football. 7 on 7 is a skeleton drill. No offensive line. No defensive line. Just throwing on air. It’s so far removed from actual football that we barely even note it in our training camp reports and we talk about everything in those things.

Let’s paint the picture. There was a rookie UDFA, who was invited to Steelers’ minicamp on only a tryout basis just five months ago, who had no real reps last week, make his debut, and play well.

It led to him running things on the fly and managing situations he had no exposure to. Like his very first attempt in the NFL.

“I think the first completion I completed of the day, I checked the protection and everything. That was something I didn’t even get a look at in practice.”

You can see how he set things up on his 3rd down strike to Diontae Johnson. Facing the appearance of an all-out blitz, Hodges checks to a full slide to the right, having James Conner work across the formation to pick up the DB blitzing to the left while keeping Vance McDonald in to block.

Had David DeCastro done a little better job here, it would’ve been picked up perfectly but still, Hodges put everyone in the right protection. And again, this is a guy doing it all on the fly with virtually no preparation. Impressive for anyone to come in and do much less a rookie who had never taken a snap before.

Maybe it was just beginner’s luck. Maybe Hodges starts Sunday, no one knows who if it’ll be him or Rudolph, and he falls apart. But based off everything we’ve seen from him so far, he’s wise beyond his years with the calm demeanor of a wily veteran, and has a serious chance to come in and move the offense against the Los Angeles Chargers.

.@DevlinHodges10 addresses the media about stepping up when his number is called, preparing for Sunday's game against the Chargers, and more. pic.twitter.com/KHSPAy2m8Y