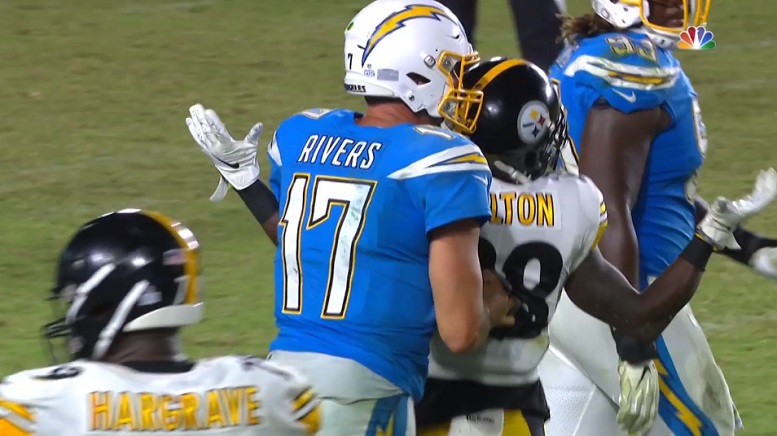 Los Angeles Chargers quarterback Philip Rivers didn’t have a memorable game Sunday night against the Pittsburgh Steelers as the likely future Hall of Famer was intercepted twice during the contest on his way to finishing with 320 yards and two touchdowns on 44 total pass attempts. Following his second of two interceptions that came with 54 seconds left in the game, Rivers was spotted by the NBC cameras getting into some sort of altercation with Steelers cornerback Mike Hilton. During his post-game press conference, Rivers was asked to comment on his end-of-game incident with Hilton.

“I was disappointed the game was over, I wasn’t frustrated,” Rivers said. “A guy comes and waves at our sideline, you protect your team. It was really no big deal. I haven’t seen him afterwards, but I’d probably shake his hand and tell him sorry I got a little fired up. But it wasn’t a big deal. There was no screaming and yelling.”

Here is #Chargers QB Philip Rivers on his altercation with #Steelers CB Mike Hilton after that last INT. pic.twitter.com/eJocZyCocw

Rivers has been known to be a bit confrontational and cocky on the football field throughout his long NFL career and it’s clear that he didn’t take too kindly to whatever it was that Hilton may have done following the interception by fellow Steelers cornerback Cameron Sutton to essentially end the Sunday night game.

After the game was over, Hilton replied to a tweet that featured video of his Sunday night run-in with Rivers following the Sutton interception.

It’s hard to tell on the television tape of the gamer if Rivers had a legitimate reason to beef with Hilton. We’ll have to wait and see if the all-22 shows the Steelers cornerback taunting the Chargers sideline after the Sutton interception. Hopefully he didn’t do such a thing. Neither Rivers nor Hilton was penalized for their actions so odds are good neither player will be fined this coming week.

While Rivers did throw 320 yards Sunday night against the Steelers 139 of those yards and both of his touchdown passes came in the fourth quarter and after the Steele had built a 24-0 lead. Sunday night might be the last time the Steelers ever face Rivers as the Chargers quarterback isn’t currently under contract past this season and is closing in on 38 years of age,.