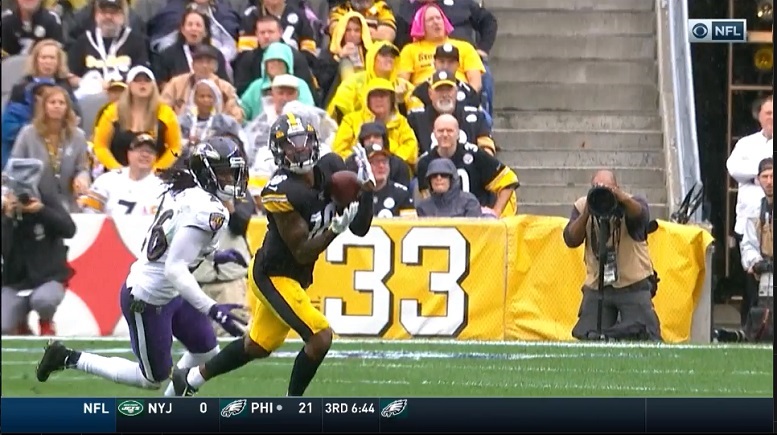 Pittsburgh Steelers rookie quarterback Devlin Hodges has already impressed a lot of people in the organization since being originally signed to the team’s 90-man roster right after participating in the annual rookie minicamp on a tryout basis. Since Steelers defensive coordinator Keith Butler has already seen Hodges throw quite a few passes since the team signed the undrafted free agent out of Samford, he was asked on Thursday if he could tell right away that the young quarterback wasn’t a typical camp arm.

“Just watching him in preseason, he looks like to me that he is a very well-schooled young man in terms of playing football,” Butler said of Hodges, who might have to make his first career NFL start Sunday night against the Chargers.

Butler then proceeded to talk briefly about one pass that Hodges threw this past Sunday against the Baltimore Ravens after relieving concussed starting quarterback Mason Rudolph earlier in the third quarter.

“More so than anything else in that game, I don’t know if you noticed, the one pass that I was really impressed with was a deep out on our offensive right that he threw before the receiver came out of his break,” Butler said. “As soon as the receiver came out of his break, he hit him right in the chest. That’s a big-time throw. You see people like Dan Fouts making those throws like that. You don’t see young guys making those throws a lot. To me, that was impressive. I hope he continues to develop. I think he will help us.”

That one Hodges’ pass that Butler was describing was the early boundary side comeback route throw to rookie wide receiver Diontae Johnson. You can tell both by the all-22 and other footage of that 13-yard pass exactly what Butler was describing. The ball is out of Hodges’ hand before Johnson comes out of his break to locate it. It got to the Johnson so quickly that it seemed to surprise him. He caught it a little high and right after he had tucked away the football it was knocked out by Ravens cornerback Maurice Canady.

Technically that completion to Johnson on the right side of the field will go in the books as the first career one for Hodges. It was a nice one for him to start his career with as well.

Should Hodges indeed wind up making his first career NFL start Sunday night against the Chargers, it might be a small advantage for the Steelers with their not being much NFL tape on the young quarterback for the Chargers defensive coaches to study. On Thursday, Steelers offensive coordinator Randy Fichtner was asked if it is an advantage that Hodges is a quarterback that people don’t have much tape at this point.

Obviously, the odds will heavily against the Steelers Sunday night against the Chargers regardless of which quarterback they choose to go with. If Hodges does wind up being the choice Sunday night, Butler knows that for the Steelers to pull off the upset that both sides of the football will need to play well and be in concert with one another.