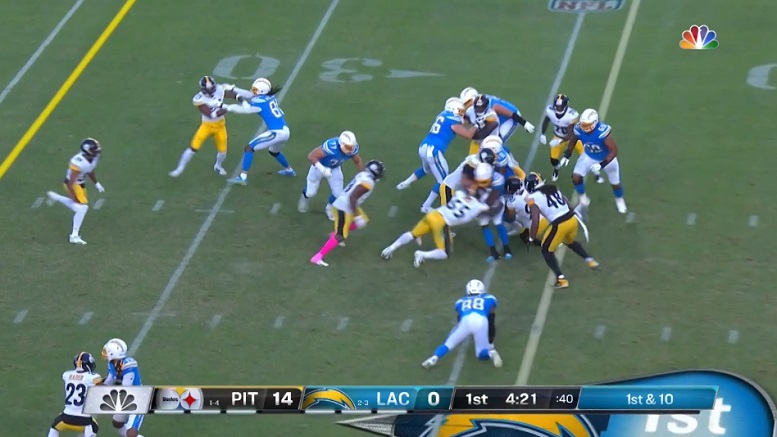 Pittsburgh Steelers rookie inside linebacker Devin Bush has not failed to impress in his first six NFL games and his play in Week 6 against the Los Angeles Chargers ultimately earned him AFC Defensive Player of the Week honors. Former NFL offensive lineman and current NFL Network analyst Brian Baldinger has been bullish on Bush every since he was drafted and that continued in his latest breakdown of the Michigan products’ play this past Sunday night against the Chargers.

“I don’t care what the record of the Steelers are, I like watching them play football. And that Devin Bush, he’s not a middle linebacker, this guy is a freaking cobra,” Baldinger says in his latest video breakdown of Bush’s play from Week 6. “Look at this guy strike, everything that moves — bam!”

As you will see below, Baldinger highlights quit a few plays that Bush made Sunday night on his way to registering a final stat-line of seven total tackles, one interception, one pass defensed and one fumble recovery that he returned for a touchdown

.@steelers @_Dbush11 plays like a Cobra. These #Steelers ain’t done yet. Not as long as they are taking the ball away in record numbers giving extra at bats at whoever is playing QB. This Cobra is electric and I can’t wait to watch #55 play v @MiamiDolphins #BaldysBreakdowns pic.twitter.com/aORyAh2100