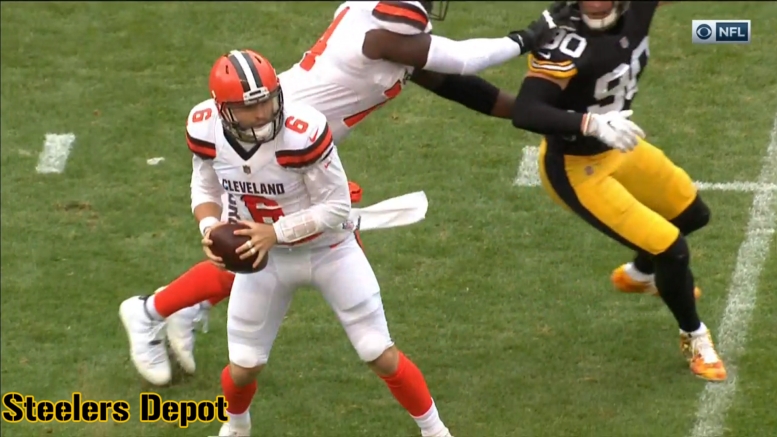 The Cleveland Browns are sitting at 2-3 on the season at the moment, not far from where they were at this time a year ago, with only one game really showing any indications of their ability to be something more than they have been in the recent past, and more performances suggesting more of the same.

After getting trounced on Monday night by the 4-0 San Francisco 49ers—a team the Pittsburgh Steelers played against competitively in Mason Rudolph’s first career start—doing so under the national spotlight, many are beginning increasingly to question whether or not this talented-on-paper roster is legitimate.

Said second-year former first-overall pick Baker Mayfield, coming off of the worst game of his career, “we’re not hitting the panic button”. Even though they have a tough stretch coming up featuring the New England Patriots and the Seattle Seahawks that can really put them in a hole.

“For us, we know the problem. We know we have to be better and do better”, the second-year quarterback said. “When you play a great team, you have to eliminate mistakes. You just have to. We know exactly what we need to do. We need to play well. We need to do our job each and every play”.

That is one thing the Browns have failed to do this year, as they have had a lot of unforced errors they have inflicted upon themselves, including but not limited to a number of foolish penalties. The fact that the offensive line play has been below the line hasn’t helped matters, either.

Cleveland was considered the favorites to win the AFC North in the offseason based on what they were able to do in free agency, via trade, and in the draft, and Mayfield was placed in the pool of likely candidates to compete for the MVP award. While the division being as poor as it is makes the former still viable, the latter appears increasingly unlikely. He currently has twice as many interceptions as touchdowns.

Their big offseason move was to trade for All-Pro wide receiver Odell Beckham, Jr., but outside of one 80-plus-yard touchdown, he hasn’t been a particularly dynamic asset for the offense just yet. Having two Pro Bowl wide receivers to throw to hasn’t been the transformative elixir the front office was seemingly expecting, at least up to this point.

In their defense, this is still a young team, including within the coaching staff, with a first-year head coach, and it could take time to develop. There is a lot of young talent up and down the roster, and their investment is for the long term. Even general manager Jon Dorsey cautioned about headstrong optimism in 2019 during the offseason.