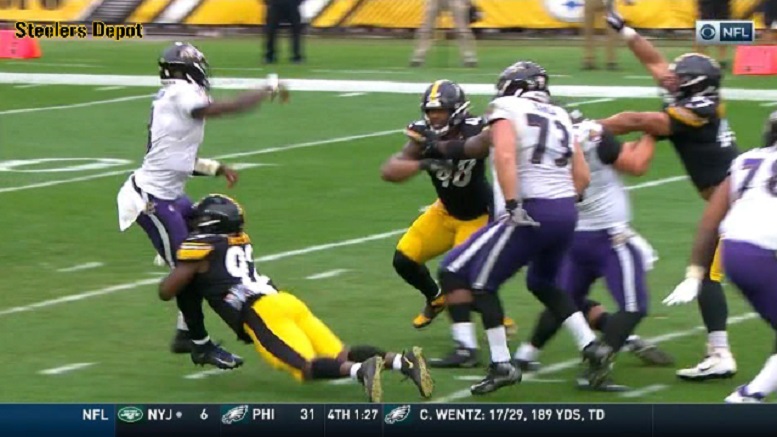 Pittsburgh Steelers outside linebacker Olasunkanmi Adeniyi was flagged for a crucial and questionable roughing the passer penalty in the fourth quarter of the team’s home loss to the Baltimore Ravens. After the game was over, Adeniyi was asked to give his thoughts on his hit on Ravens quarterback Lamar Jackson with 2:30 left in the fourth quarter that resulted in him being penalized 15 yards for roughing the passer.

“I thought it was a clean play but the ref called it like like they did and we just got to keep playing defense and just overcome it,” Adeniyi said.

Adeniyi’s penalty came on 2nd and 8 play from the Ravens 27-yard-line. That pass from Jackson to running back Mark Ingram was incomplete and so had Adeniyi not been flagged, it would have been 3rd and 8. The penalty, however, gave the Ravens a 1st and 10 at the Baltimore 42-yard-line and that drive ultimately culminated in a game-tying field goal by kicker Justin Tucker.

Gene Steratore, a former NFL referee and the current rules analyst for CBS Sports, commented on the roughing the passer penalty on Adeniyi on Twitter.

I am all for protecting the quarterback, but this is not roughing the passer in #BALvsPIT. From this angle that is clear, but remember the referee is behind the QB. I believe that these types of plays are much less subjective than pass interference and would be easier to review. pic.twitter.com/AaTmgEBXu8

Here are the NFL rules on such a hit on a passer below the knees.

I get where both Steratore and the rule book are coming from it’s definitely a call that can be debated based on what both say. Jackson is quite close to getting initially hit while he has both feet off the ground, however. It’s one of those calls that you are glad your quarterback gets if he’s on your team but unhappy if it’s called on a defensive player on your team. The penalty didn’t put the Ravens in field goal range, however. The ravens gained 18 more yards after that.

For whatever it’s worth, Adeniyi said he didn’t get ant exploitation about the penalty from the referees after he was flagged for roughing Jackson.

We’ll see if Adeniyi gets fined this next week for his hit on Jackson. If he doesn’t, then that is essentially the league admitting that no penalty should’ve been called on him.