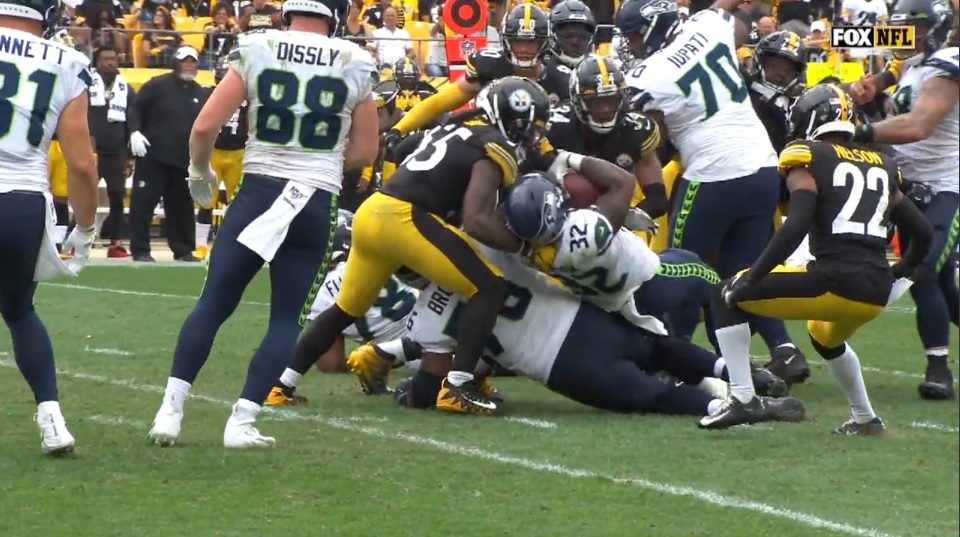 1. Passing woes caused by either… –A lack of creativity in the offense. There is no surprise in the offense. You don’t see misdirection plays. You don’t see Jet/Fly sweeps and passes. You don’t see fake screens one way, throw the other. It’s very vanilla. There seems to be a lot of 5 wide all curl passes. Randy Fichtner needs to start digging deeper with Ben Roethlisberger in the game or this offense will struggle all year. There was more creativity with Mason Rudolph in the game. So was that misdirection to help protect Rudolph? Does Ben not like running the creative stuff? Inquiring minds want to know.

2. Or an inability to separate by the WRs – Its only two games and I try not to overreact too quickly but I have seen way to may plays so far where every receiver has a defender right there with him. Route combinations definitely plays a part but these receivers need to run their routes with a little more urgency and burst out of their breaks. The QB should be able to make his drop plant and get the ball out on time at least a few times a game. The entire group of WR’s need to start getting open more consistently to start making plays.

3. Defensive line pressure – The pass rushers came to play. We got to see and perfect T-E stunt early with Stephon Tuitt clearing the path for J.J Watt.  Tuitt was getting great push early in the game and he wasn’t alone.  Javon Hargrave got in the backfield as did Cameron Heyward.  I think I even remember Bud Dupree getting back there. Seattle adjusted and got the ball out quicker in the second half. It makes it a heck of a lot easier to cover WR’s when the QB can’t sit back there all day.

4. Open Field Tackling – The Steelers had tackling issues last year and it looked to have improved in the early going of this season. I love aggressiveness on defense but you have to know when and where to be aggressive. There were several missed tackles in the open field with defenders being out of control to the ball.  They need to know when to break down near a ball carrier and limit the gain instead of going full steam, missing the tackle and giving up extra yards.

5. Wide Receiver Tryouts this week – I would like to thank Donte Moncrief for his time in Pittsburgh but I don’t think he should be on the roster come Monday morning. Five drops in eleven targets with the latest drop turning the momentum in this game, personally, I’ve seen enough. Johnny Holton has done pretty well as a gunner on punt coverage but he gives nothing as a WR on offense. Kevin Colbert should be on the phone right now calling free agent receivers. Send a group text and see who’s available to work out on Tuesday.

6. Dumb Penalties – The first one, on what would have been a defensive touchdown, was a bit ticky tack but there is no reason to even give them the opportunity to call it. Sean Davis got called for a block in the back that was 10 yards behind the play. The WR sold it flopping to the ground and they brought it back. You, Davis, must be smarter. The second one on Dan McCullers, unnecessary roughness on the field goal attempt, was a 4 point swing. It’s not a new rule; you can’t hit the long snapper. You, Big Dan, must be smarter.

7. Steven Nelson played bigger today – He was given a tough assignment today and he stepped up. He was given rookie DK Metcalf, who has a size advantage, in most coverages and he was up to the task. He was credited with at least one pass break up, had six tackles and played well to stay in the WR’s pocket. Metcalf was held to 3 catches for 61 yards and a touchdown but Nelson wasn’t on him on that play. Well done, Steven.

8. Covering the TE – The woes continue. We’re going to have to endure some issues with a rookie linebacker in coverage. On the first touchdown to Will Dissly, Devin Bush was in good position. He was at a disadvantage height wise and Russell Wilson made a perfect back shoulder throw. That will happen.  On the second touchdown to Dissly, Bush looked confused. His eyes went to the running back out of the backfield, which Mark Barron was covering, and left the TE all alone. Rookies will make mistakes but hopefully not too many more going forward.

9. Free Mason – Okay, I’ll say it, Mason Rudolph should start. No not really…maybe. You have to give the kid a lot of credit though.  He got screwed by Moncrief but didn’t let it bother him.  He looked calm, his arm strength looked good and he was able to move the ball something the offense was struggling to do. Maybe the Seattle defense played a little softer with the backup in but it was a good NFL debut for him.

10. Where is the spy on Wilson? – I believe it was third and 18 just before the 2 minute warning. Wilson drops back to pass and immediately scrambles up field for a 16 yard gain. The only thing that stopped him was him, sliding before the first down marker. Did Keith Butler forget what kind of athlete Wilson is? Why they didn’t have someone in the middle to mirror him baffles me. Just another question about this defense.

Bonus Thoughts – Third down defensehad some big stops in short yardage and big allows in third and long situations.  Curious to see those numbers.  Cam Sutton had consecutive open field tackles in the second quarter.  Good to see that from someone. POOTOS were created. I believe they had 14 points off of turnovers which is another positive.