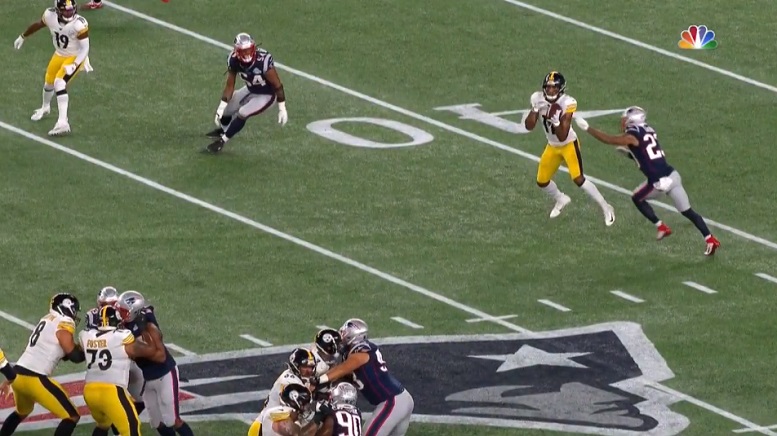 The Pittsburgh Steelers Sunday night blowout loss to the New England Patriots was stomach-churning on many levels. In fact, watching the 60 minutes of action surely made fans of the team feel like they had eaten some bad eggs. Speaking of eggs, Steelers head coach Mike Tomlin admitted Tuesday during his weekly press conference that his team laid one Sunday night against the Patriots.

Tomlin pointing to the short-yardage issues that the Steelers offense had Sunday night as being a part of that ugly egg laid by his team is certainly understandable. After all, the Steelers offense failed to convert four short-yardage situations during the game with three of those coming in the second quarter and at a crucial point in the game. Tomlin later chose to bypass another opportunity in the third quarter in lieu of taking a short field goal from the Patriots 1-yard-line down 20-0. He talked about those failed opportunities on Tuesday quite extensively.

Those drops that the Steelers had Sunday night that Tomlin referenced belonged to new wide receiver Donte Moncrief as he had either three or four, depending on who you ask. One of those perceived Moncrief drops came on a fourth down and 1 play from the Patriots 47-yard-line with exactly two minutes remaining in the first half. While Patriots safety Patrick Chung was credited for a pass breakup on that short pass to Moncrief, it was still a ball that the veteran wide receiver should have caught.

Tomlin pointed to that specific failed fourth-and-1 play later in his Tuesday press conference when asked what he viewed as the team’s short-yardage shortcomings Sunday night and what he thinks went wrong in that phase of the offense.

“Again, like I mentioned, man, I didn’t think our plan was good enough and I didn’t think the execution of the plan was good enough,” Tomlin said. “You know, I don’t know how to be any more black and white than that. You know, we got in five-wides in one instance. They [the Patriots] stayed in nickel, so we knew that they would be in zone. We ran a nice zone concept and we dropped the ball. Is it a good plan? Only if it works. If you don’t catch the football, it’s a bad plan, for example. So collectively we own that performance particularly in the short yardage area.”

You can see that fourth-and-one drop by Moncrief below. Had he caught that pass, the offensive possession would’ve obviously been extended and hopefully it would’ve ended with a touchdown. Instead, the Patriots offense took over on downs and then proceeded to drive down for a field goal to take a 20-0 lead right before halftime.

Moncrief wasn’t the only one to blame for the short-yardage failures Sunday night as offensive coordinator Randy Fichtner and the entire offensive line also needs to share some blame as well. In addition to the failed fourth-and-1 first half pass to Moncrief mentioned above, the Steelers offense failed to convert two third-and-1 runs by running back James Conner earlier in the second quarter.

The Steelers first failed run attempt by Conner went up the middle and was stuffed for no gain while the second one, a toss left via an outside zone play, was easily snuffed out for a loss of 4 yards. On both plays the Steelers utilized 11 personnel and thus fullback Roosevelt Nix wasn’t on the field. As it turns out, Nix had injured his knee sometime during the game via special teams and that might explain him not playing any offensive snaps Sunday night. Tomlin, however, didn’t blame Nix’s injury for being the root of the Steelers short-yardage and run game woes that the team had Sunday night,

“No excuses in that regard,” Tomlin said when asked about not having Nix Sunday night to help the running game.

Tomlin and the Steelers enter Week 2 hoping that they’ve cleaned up all that bad egg they all collectively laid Sunday night off their faces. The team can’t afford to lay another bad egg Sunday at Heinz Field against a good Seattle Seahawks team. If they do, the Steelers will keep an egg in the win column and possibly be two games down in the AFC North division by the time Sunday is over with.