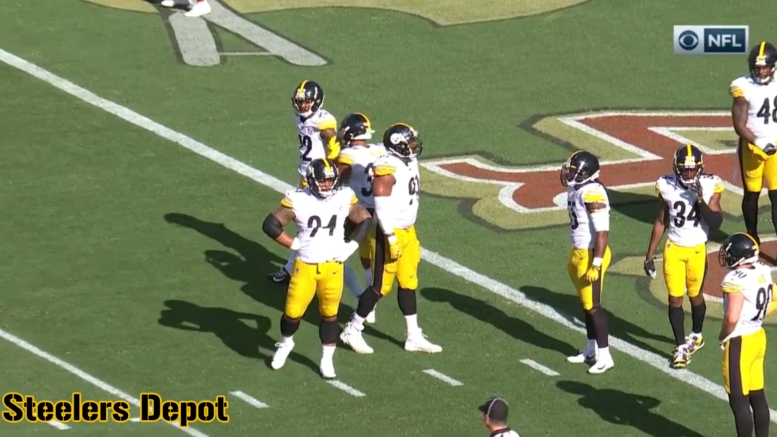 The Pittsburgh Steelers, once upon a time, made their mark on the league by being the premiere run-stoppers, forcing teams to throw the ball against them, at which point their pass rush would wreak havoc and create turnovers.

That was the old model for playing defense, which largely no longer holds in a league where everybody is throwing the ball 60-65 percent of the time simply out of preference. But it’s still essential to stop the run when opposing teams actually run the ball, and head coach Mike Tomlin is not satisfied with how they have done that job recently.

He said as much during his pre-game press conference yesterday when asked about the run defense, and informed that several of his defensive players had expressed frustration with their collective performance in that area.

“I agree with our guys”, he said. “They should be angry because of the quality of our performance in that area”. And he had one very specific critique in mind:

It wasn’t always significant, but it was just too many times that the pile was falling forward. So it’s better technique, it’s more physicality in terms of taking on blocks to minimize vertical holes, so there’s not more space as plays come to an end. I just thought, too many times within the game, the runner was able to fall forward, and that usually has very little to do with the quality of the tackle, it has more to do with how we’re combating blockers and minimizing space relative to that, whether it’s horizontally or vertically. I think that’s an area of the game that we could’ve been better at.

On Sunday, the San Francisco 49ers ran the ball 40 times for 168 yards, scoring twice on the ground. Those numbers even include some busted plays and a kneeldown at the end of the game, so the practical statistics are even a bit better.

They had three different running backs total at least eight carries, with Jeff Wilson being used as the goal line and short-yardage back. He carried the ball eight times, and while he gained only 18 yards, he scored twice. Raheem Mostert ran the ball 12 times for 79 yards, while Matt Breida gained 68 yards on 14 rushes.

On the season, the Steelers have allowed 418 yards on the ground on 102 attempts, with three scores, averaging 4.1 yards per attempt against them. statistically, they rank almost at the bottom of the league in attempts and yards, as teams have felt comfortable attempting to run the ball against their fronts.

Their mission is to create discomfort, and the hope is that they can do that this week against a Cincinnati Bengals team that has had issues up front along their offensive line, which has had the ground game grounded so far this year.