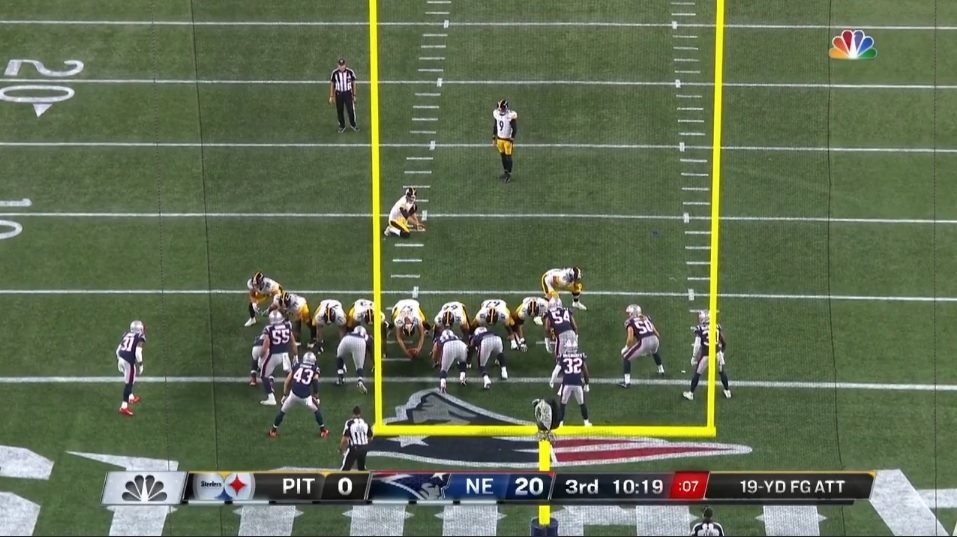 Mike Tomlin was looking for positivity.

He should keep searching.

Although it ultimately probably wouldn’t have altered the game’s final outcome, his decision to kick a field goal on 4th and goal from the one down 20-0 was one of the biggest head scratchers of the night. In his post-game press conference, Tomlin was asked why he opted for three points.

“We wanted a little positivity,” he explained to reporters. “We didn’t have enough positivity at that point. We wanted to get points to kinda get things going. I think that all got nullified by the big play we gave up on the subsequent drive.”

Tomlin was clearly looking to get some sort of points on the board and hope for a defensive stop. Chris Boswell did connect on a 19 yard chip shot but the defense squandered away any tiny glimmer of hope in short order. New England needed just four plays to go 75 yards, capped by a 58 yard score to Phillip Dorsett to go up 27-3. At that moment, the game was all but over.

The fact it was a decision highlighted how poorly the Steelers’ offense performed in short-yardage situations, failing on four straight 3rd/4th and 1 snaps, but that’s a story for a separate article.

Though getting points on the board in a game where the offense struggled to do anything was good, it clearly had no chance of putting a serious dent into the Patriots’ lead. It remained a 17 point, three score lead for New England into the second half. The odds of them blowing that were about as good as Donte Moncrief catching a pass last night.

The 20 point deficit at halftime was something the Steelers have never come back from. Prior to Sunday night, the Steelers were 0-33 all-time in games when trailing by at least that much at the break. To have any chance to change history, Pittsburgh needed to be utterly aggressive in the 2nd half. Kicking field goals doesn’t qualify. That’s a “scared” decision for a man who preaches not to live in your fears. Simple as that.