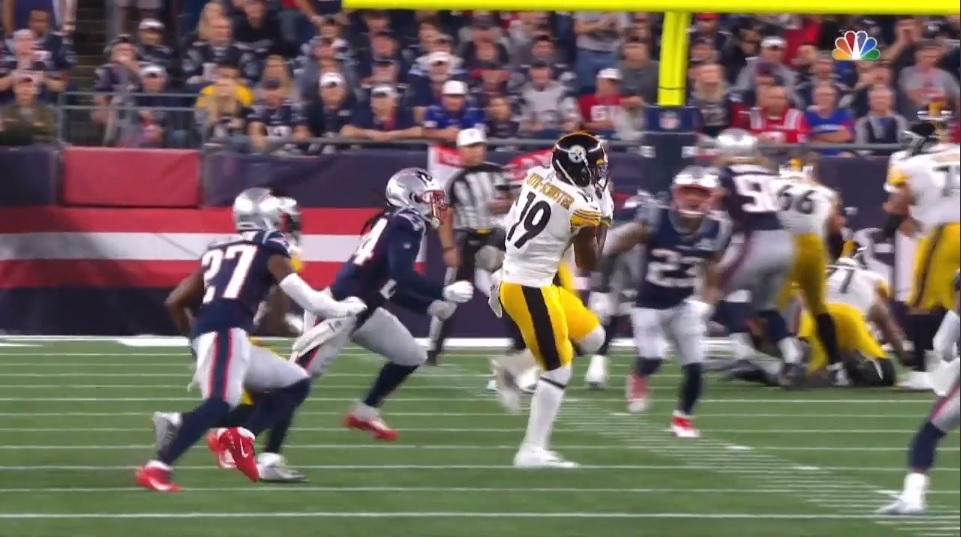 It’s been hard enough for the Pittsburgh Steelers’ offense to make big plays this season. But when they have, they’ve all come outside the numbers or run-after-the-catch.

And that’s what has to change this Monday. Well, that and a dozen other things.

Combing through the charting the wonderful Matthew Marczi does, the offense has completed only one pass that traveled 15+ yards down the middle of the field (inbetween the numbers is my landmark here, for the record).

That play? A 19 yard completion to JuJu Smith-Schuster on 3rd and 10 in the opening loss to New England.

There have been other big plays but they’ve been isolated to outside the numbers. Not that it’s a terrible thing, big plays are big plays and you better believe this offense could use as many as they can get, but they’re missing out on a big portion of the field. They have to be able to work all levels of the field to maximize talent and overcome the obvious limitations and struggles this group is going through.

And this offense must make more big plays. No longer are they the crisp, efficient unit led by Ben Roethlisberger. They’re feast or famine and right now, they’ve been starving. Just seven completions of 20+ yards. Tied for 26th in football, a far cry from what fans are used to seeing. For comparison’s sake, the Steelers’ offense finished fourth in such plays last season.

Compounding that challenge is the fact they’re likely to play the Bengals without TE Vance McDonald. Nick Vannett brings plenty of value to this team but making plays down the seam isn’t one of them. Instead, they’ll have to find a way to get Smith-Schuster better matchups and perhaps start moving around someone like Diontae Johnson.

The Bengals will be without top slot corner Darius Phillips, placed on IR earlier this week. With below average linebackers and good outside corners, the middle of the field is the area Randy Fichtner is going to want to attack.