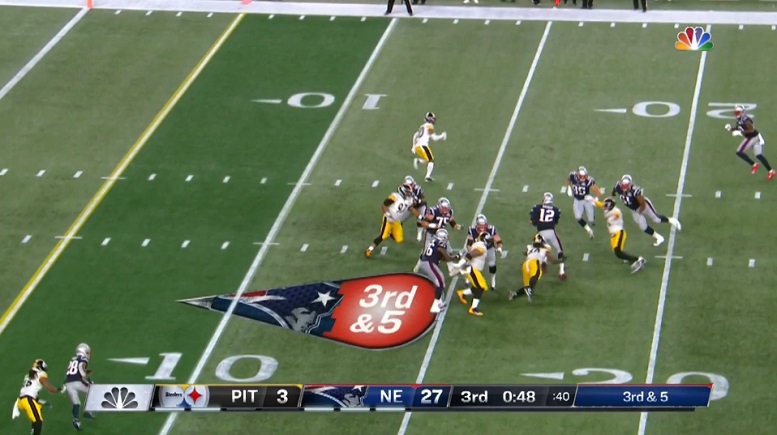 The Pittsburgh Steelers defense only managed one sack Sunday night in their Week 1 regular loss to the New England Patriots and outside linebacker Bud Dupree was the player to receive credit for it. Below is a look at that lone sack that happened late in the third quarter.

Dupree’s sack of Patriots quarterback Tom Brady came on a 3rd down and 5 from the Steelers 10-yard-line late in the third quarter. The Patriots used 11 personnel on the play and an empty backfield with Brady under center.

At the snap, the jet sweep play fake against the Steelers four-man rush created some instant time for Brady in the pocket in addition to a huge gap to the left of the quarterback. The Steelers man-coverage, however, was great after the snap of the football and resulted in Brady holding the football.

That extra time in the pocket by Brady gave Dupree time to finally get past Patriots left tackle Isaiah Wynn. The pocket finally collapsed around Brady and as he attempted to escape to his right, Dupree dove for the legs of the quarterback and took him down.

Summary: This sack was essentially a coverage sack for the Steelers defense with Dupree getting credit for it. From snap to sack over 5 seconds elapsed.