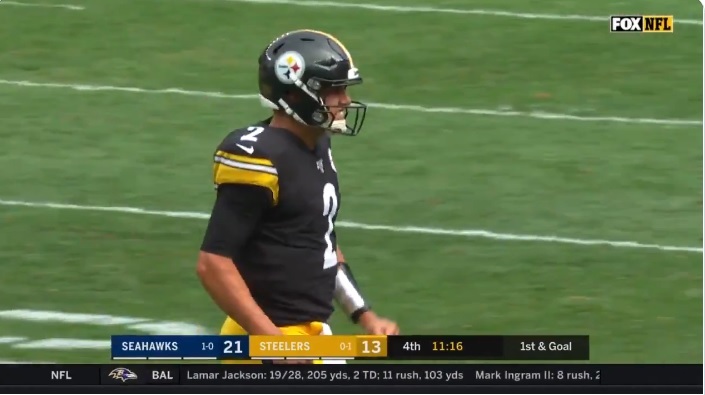 Winners and losers from the Pittsburgh Steelers 28-26 loss to the Seattle Seahawks Sunday afternoon.

Pass Protection: Though the offense struggled to move the ball for long stretches of the time, it’s of no fault of the front five up front. They repeatedly have the QB all day back there for something to open up. So kudos to the group across the board.

TJ Watt: Watt provided the defense’s first splash of the season, punching the ball out on a Chris Carson carry. Mark Barron recovered it and should’ve had a TD had it not been for a dumb Sean Davis block in the back. Watt added his first sack of the year too, coming free on a T/E stunt. The playmaker this defense needs.

Cam Sutton: Couple big plays from him at the end of the first half. Two crucial open field tackles to keep the clock running and eventually force Seattle to settle for a 58 yard field goal that pulled wide left.

Steven Nelson: The Steelers stacked the box to stop the run, leaving Nelson on rookie WR DK Metcalf. Nelson responded by repeatedly defending the back shoulder fade, only allowing the first attempt of the day, which turned out to be a heck of a grab by Metcalf. Nelson has looked like the best player in the secondary the first two weeks.

Mike Hilton: Hilton gave the Steelers extra life late in the 4th quarter with his forced fumble on Carson. Hilton’s proven to be one of the league’s top run-stuffing cornerbacks and that was splash the team needed on a day where the offense didn’t do enough. Turned into a Vance McDonald TD on the very next play.

Mason Rudolph: Rudolph sure looked good in his first NFL action. Poised, getting the ball out on time, and the confidence to throw the ball over the middle of the field. Moment wasn’t too big for him and he gave the offense energy and life. It’s just one game but it looks like the Steelers found a good QB.

Jordan Berry/Chris Boswell: Berry had a great hold on an awful Kameron Canaday snap that let Boswell hit from 41 yards out. Boz was steady on the day and kudos to him for making the kick despite the blip in the operation.

Vance McDonald: They weren’t the two most difficult TDs of his career but hey, when you find the end zone twice, odds are really good you’ll get on this list. McDonald kept the play alive on a TE screen that was initially well-covered and caught his second TD off playaction following the Hilton FF. Good job by Randy Fichtner to get him involved early in the game too after essentially being shut out a week ago.

Stephon Tuitt: Played today like we’ve been waiting on. Two sacks, dominating Seahawks’ RG DJ Fluker. Carried over what he did to Tennessee in the third preseason game. Also finished the day with three QB hits.

Anthony Chickillo: Chickillo had a horrible missed tackle on 3rd and 2, allowing RB Rashaad Penny to sidestep him en route to a 37 yard TD. Chick may be trusted for his assignment sound football but he’s a subpar athlete who has clearly reached his ceiling. It’s time to give Ola Adeniyi a chance to be the rotational, #3 OLB.

Donte Moncrief: It’s hard to have only one target and find yourself on the losers list. That’s how bad it’s been for Moncrief. Mason Rudolph’s 2nd career pass attempt skipped through his hands and intercepted, leading to that Penny 37 yard score. His hand injury is hindering him to the point where he can’t be on the field any longer.

Devin Bush: Tough game for the rookie. Bush was supposed to see a smaller package of plays, not on the field the first two drives but had to step in after Vince Williams went down with a hamstring injury. He struggled filling in, giving up two touchdowns to TE Will Dissly down the seam. On the latter, he seemed late with his eyes to get depth and defend the play. Dissly even seemed to pancake him on one run play. Even without being a central communicator, he seemed unable to play to his timed speed.

Safeties: Not good enough all around. I mean, clearly. Sean Davis can’t separate player from ball and had a ridiculously selfish block in the back call that negated Barron’s TD. Terrell Edmunds is physical and made a nice breakup in the first half but has been inconsistent as a tackler and gave up the 4th quarter TD to DK Metcalf. And Kameron Kelly hasn’t carried over any of his August hype. There’s no playmaker here and that’s an obvious problem.

Ryan Switzer: Who was seemingly removed from punt return duties after muffing a punt, though he got a lucky hop and was able to recover it. Switzer had just one reception on four targets as a receiver, that catch going for no gain, and if he’s just going to be a kick returner on this team, he’s not going to offer much value.

Bud Dupree: We’ll have to look at the play more in-depth but Dupree seemed to be the contain/spy player on Russell Wilson’s 3rd and 16 scramble, setting up 4th and 1, a conversion that iced the game away. Elsewhere, aside from some decent backside pursuit, Dupree was largely invisible. But that miscue, failing to bring Wilson down in the open field, was costly.