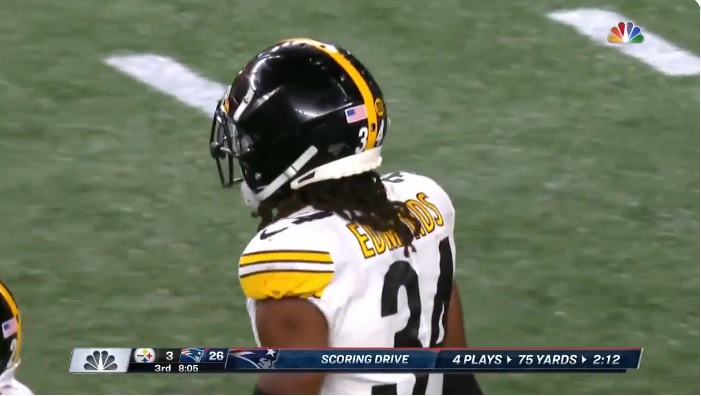 Well…glad that’s over. Winners and losers from the Pittsburgh Steelers abysmal 33-3 loss to the New England Patriots in the regular season opener.

James Washington: Very few positives tonight but Washington at least set up the Steelers first scoring drive. Don’t ask me why he so willingly floated out of bounds but he showed the ability to get vertical tonight, something this offense needs if it wants to get back on track. His 45 yard catch was something to get at least a little excited about.

Run Defense: New England didn’t need to run the ball to win this one but the Steelers were stout enough when called upon. Pats averaged just 3.4 YPC and held Sony Michel to more carries (15) than yards (14).

Javon Hargrave: The run defense was decent enough and Hargrave showed off his power on at least one snap, sending guard Shaq Mason hurling into the ground.

And yeah, that’s about all I got here.

Keith Butler/Randy Fichtner: Both men were my X-Factors heading into this weekend. And both failed miserably. Butler tried to run the same man concept that worked last year. Predictably, the Patriots’ adjusted and picked them apart with man beaters all game long.

Fichtner tried to copy and paste his gameplan from last season, running toss counters all game. At one point, he called three straight such runs. The offense had to punt. Someone please alert him Vance McDonald wasn’t the player this offense traded away this year and McDonald is, in fact, pretty good. He wasn’t targeted tonight until the final two minutes. Bizarre.

Both had to bring their A game tonight. After tonight, both should probably be expelled.

Mike Tomlin: Players gotta play and execute and I don’t like the line of “not prepared, didn’t care.” But his decision to kick a field goal down 20-3 was inexcusable and falls directly on his shoulders. That’s playing scared. Playing to try and make the score look a little better by game’s end. It didn’t and had the Steelers punched it in there, maybe they could’ve made it at least a bit more interesting. Put some pressure on the Patriots for the first time all night. Horrendous decision.

Donte Moncrief: Hard to ask for a worse start than this. Perhaps Moncrief was bothered by the dislocated finger injury suffered early in training camp but that’s not an excuse. He’s gotta make contested catches. He had a 4th and 1 drop and another in the end zone. If this keeps up, he’s going to become 2019’s version of Morgan Burnett. And that’s not a compliment.

His three drops tonight made up for arguably the worst wide receiver performance I’ve ever seen. And I watched Limas Sweed.

Pass Rush: Really had trouble getting after Tom Brady tonight. Pats did a nice job keeping TEs in and give Brady time but the whole front struggled, even TJ Watt. Rush and cover go together and I guess in a way, they did go together tonight. Both were equally horrible.

Kameron Kelly: Kelly was a key player tonight, his NFL debut against Tom Terrific. It turned out about as well as you’d expect from a guy playing in the AAF six months ago. Kelly was picked onand though he was a decent tackler, offered nothing in coverages. Terrell Edmunds was not much better either, a disappointing start coming off an impressive training camp.

Alejandro Villanueva: The o-line did a good enough job protecting Roethlisberger tonight and picking up the stunts and games the Pats like to play on obvious pass downs. But Villanueva, who tends to look rusty out of the gate, seemed to struggle. Run over at least twice, called for one hold, and beat badly around the edge in pass protection on at least one occasion.