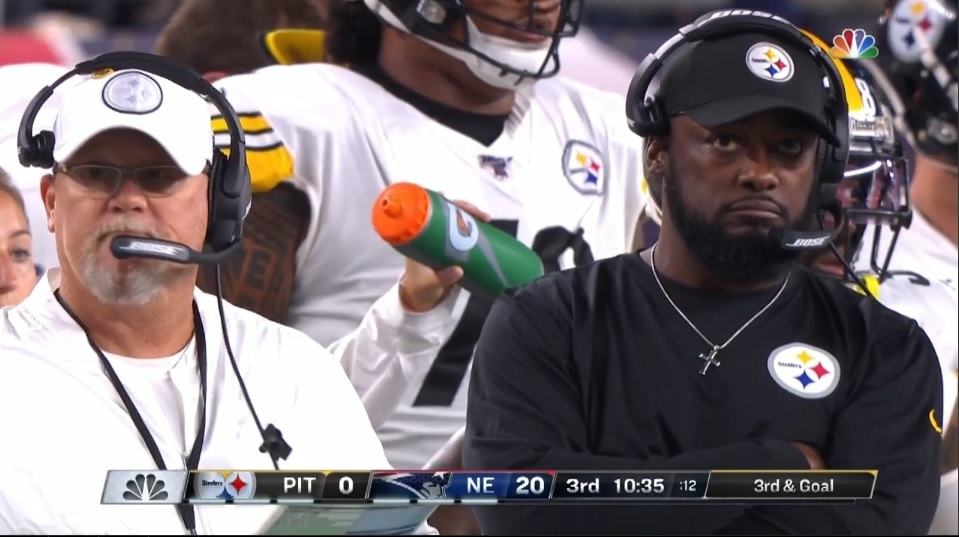 That was an absolute train wreck; from the offense, defense and special teams, to the coaching staff, everyone involved with the Pittsburgh Steelers Sunday night against the New England Patriots looked like an unorganized, poorly coached football team.

All that said, the Steelers are fortunate it’s only Week 1 and Sunday night’s loss only counts as one, even if there are plenty of concerns raised after that lackluster performance.

Coming into the game, I was excited to see the new-look offense and the youth on defense. I came away less than impressed as the offense looked like it had nobody that could really make a play, while the defense looked a step slow and confused for much of the night.

That doesn’t even really begin to touch on coaching, as Keith Butler made very few adjustments – if any – defensively, while Randy Fitchner called a conservative game and Mike Tomlin continued his traditional struggles with situational football, like going for it on 4th and 1 near midfield and later settling for a 19-yard field goal on 4th and 1 from the 1-yard line.

Now that all of that is out of the way, let’s move on to grades so we can begin to move on from this game.

Ben Roethlisberger looked very rusty throughout this game, firing behind guys on crossing routes, struggling to dial in the deep ball consistently, and generally failing to get the offense into a groove.

However, he received very little help from guys like Donte Moncrief and Diontae Johnson on the night as the pair dropped at least 6 balls in the loss.

Roethlisberger did move well in the pocket for much of the night, evading rushers to extend plays while looking downfield. It was just a rusty day for a veteran quarterback who I’m sure will be fine.

But it’s tough to watch a veteran like Roethlisberger come out looking like he did, while seeing Tom Brady on the other side looking clinical once again.

James Conner had very little running room on the night, finishing with just 2.1 yards per carry, so it was a very tough night on the ground for the Steelers. Conner got off to a decent start on the ground, ripping off 4 yards on his first carry, but after that it was a tough slog, which really forced the Steelers to be one-dimensional.

Jaylen Samuels wasn’t much better either, rushing for just 4 yards on 2 carries. Samuels looked slightly slow laterally, which allowed the Patriots to close off running lanes.

While Conner did struggle on the ground, he once again made things happen through the air, finishing with 4 catches for 44 yards. He tried to make things happen repeatedly, forcing a few missed tackles. Samuels caught just 1 pass for 2 yards.

Moncrief had one of the worst games I’ve ever seen from a wide receiver. The former Colts and Jaguars wide receiver was targeted a team-high 10 times and dropped at least 4 balls, finishing with just three catches for 7 yards.

I wonder how much that dislocated finger injury suffered in training camp is still affecting him. He appears to have no hand strength right now as at least three balls were popped out of his hands at the catch point.

Johnson didn’t have much better of a night, dropping at least 1 pass in his NFL debut. That said, the rookie did have two circus-type catches, tipping the ball to himself with one hand to pull in the pass, finishing with 3 catches for 25 yards. He just didn’t create much separation though, which was a calling card for him in college.

I’m sick of seeing Ryan Switzer already. He’s a great guy and good for the locker room from everything we’ve heard, but he’s not an NFL wide receiver worth targeting 6 times in a dink and dunk offense. Switzer rarely creates much separation, simply cannot force a defender to miss one on one, and seems to have a limited route tree. I’d love to see the Steelers let him open things up because he was a dynamic wide receiver in college; doing this short possession stuff isn’t his game, and it’s not helping the Steelers’ offense whatsoever.

Smith-Schuster did just fine getting open with that other guy around, but the Patriots made adjustments and tried to take him away. Washington seems pigeonholed into the “deep guy” role, which is a bit unfair to him. I’d like to see the Steelers open things up for Washington because he can be so much more than just a deep threat.

Where was Vance McDonald all game? Did anyone see him? Does Fitchner know 89 is a game-changing tight end? It sure didn’t seem like it on Sunday night.

McDonald didn’t receive a target until a meaningless dump-off in the fourth quarter that went for 21 yards. Then, he added a 19-yarder, but it was just too little, too late.

It was hard to tell if McDonald or Xavier Grimble had any sort of impact one way or another as a blocker, but the pair couldn’t get involved in the passing game during a blowout loss that saw the Steelers throw the ball 47 times.

This unit was absolute garbage against a rebuilt Patriots front 7.

Alejandro Villanueva really struggled against guys like Deitrich Wise and Chase Winovich, getting called for a hold that forced a punt, while also getting walked back into Roethlisberger’s lap by Winovich’s bull rush.

Watching the game again, it appears that Maurkice Pouncey first hurt his leg on the Conner’s second carry of the game, and he never looked right after that. He was slow on reach blocks and didn’t work to the second level well.

David DeCastro took a stupid unsportsmanlike conduct penalty and was generally hit or miss on the night.

New England did a great job winning one on one battles up front, putting a ton of pressure on Roethlisberger all night long. And when you can rush for just 32 yards on the ground with a unit considered one of the best in the business, it’s a disastrous night.

Oh, and then there was BJ Finney failing to snap the football as the rest of the offense moved. Cue the Benny Hill music.

After a run stop on the first play of the game, where was Stephon Tuitt? Where was Javon Hargrave? At least Cam Heyward showed up slightly as a run defender, finishing with 8 stops.

It was a really rough night for the Steelers’ defensive line against the Patriots, even though they allowed just 3.7 yards per carry. The front three failed to put any type of pressure on Brady all game long.

Tyson Alualu got a lot of run along the defensive line, finishing with 4 stops. It seems like the Steelers wanted to rotate Alualu in heavily to keep guys fresh. There wasn’t much to keep fresh when the front three didn’t play well at all.

Yeah, Bud Dupree had a sack, but Isaiah Wynn dominated him all game long. Dupree showed all sorts of speed to power in the preseason, but that disappeared Sunday. Great.

TJ Watt played the run well, but couldn’t muster much heat on Brady before leaving with an injury in the fourth quarter.

Inside, the Patriots went after Mark Barron right away, torching him with swing routes to James White and Rex Burkhead out of the backfield. Barron was signed to add athleticism and coverage ability, and he just wasn’t up to par in that area.

I liked what I saw from Devin Bush for the most part. He finished with a team-high 11 tackles in the loss. The main concern though was the general struggles to get off blocks inside. I saw him get buried at least twice on power runs by the Patriots. He’s going to be just fine though.

It was Jon Bostic on Keenan Allen and TJ Watt on Sammy Watkins last year, and it was Vince Williams on Josh Gordon this year. Make it stop, Keith Butler! There’s no reason Williams should be carrying Gordon down the seam out of the slot in any situation, yet there he was drawing the assignment of Gordon down the field for a deep connection with Brady. It’s not Williams’ fault; he’s overmatched in that situation. Still, the execution was very, very poor overall.

When is Terrell Edmunds going to learn how to play the football? I mean, my goodness.

Edmunds went for the big hit on Gordon down the seam instead of playing the ball, which was a hanging duck from Brady. Earlier in the game, Edmunds could have had another interception, but he was going for the hit instead of trying to play the football. He’s got to be much, much better.

Kameron Kelly was good coming downfield to play the run, but he was rough in coverage, messing up on Phillip Dorsett’s 58-yard touchdown, while also failing to make a splash play on the ball throughout the night.

I thought Mike Hilton and Joe Haden were solid, as was Steven Nelson, but the lack of adjustments from Butler and the rest of the defensive staff was frustrating. The Patriots knew they were going to get man coverage on the night, and Brady did a great job motioning players around to identify coverage schemes. Then, once he saw it was man, he was able to utilize picks and rubs to get guys open.

Hey, at least Chris Boswell nailed hjs field goal.  There’s just not much to say there about that chip shot.

Jordan Berry needs to work on better hang time if he wants to hang around all season long. He out-kicked his coverage twice, allowing returns of 20 and 15 yards to rookie Gunner Olszewski.

Coverage units were a disaster too, as a couple of missed tackles on punt returns led to more yards, while a pair of Steelers missed a tackle on Brandon Bolden on a kick return.