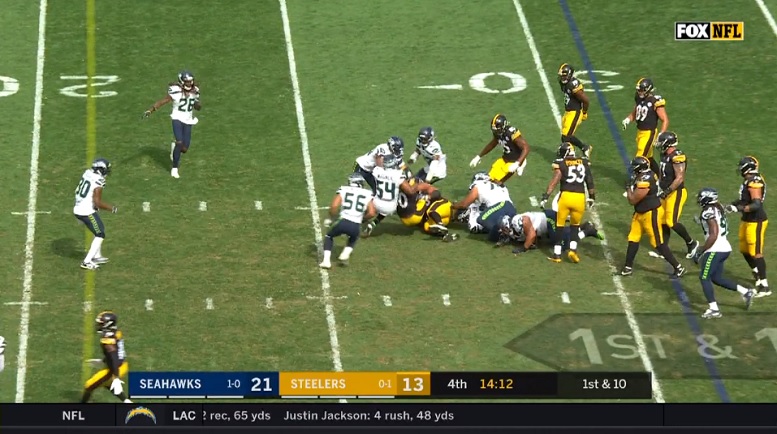 While the Monday news regarding the injury suffered Sunday by Pittsburgh Steelers quarterback Ben Roethlisberger wasn’t good, at least running back James Conner received great news concerning the knee injury he suffered during the second half of the team’s loss to the Seattle Seahawks.

“I don’t think it’s long term,” Conner said Monday about his knee injury during his weekly appearance on 93.7 The Fan. “I’m pretty confident I’ll be out there this coming Sunday.”

Conner, who rushed for only 33 yards and a touchdown on 11 total carries against the Seahawks on Sunday before leaving in the fourth quarter with a knee injury, revealed what the doctors found after further examination.

“They said it’s a bruise or contusion, no tear,” Conner said.

The Steelers starting running back seemingly plated his last snap of Sunday’s game against the Seahawks with 14:19 left in the fourth quarter. That play was run by Conner up the middle for 5 yards. He said Monday he tried his best to return to the contest.

“I tried everything I could to get back in the game, but I would be doing the team disservice if I wasn’t able to accelerate,” said Conner, who played 31 of 57 total offense snaps against the Seahawks

Backup Steelers running back Jaylen Samuels, who played 22 offensive snaps against the Seahawks, carried the football three times for 18 yards after Conner exited the game for good.

We’ll find out more about Conner’s potential status for Sundays road game against the San Francisco 49ers on either Tuesday from head coach Mike Tomlin or on Wednesday when the first injury report of Week 3 is released.