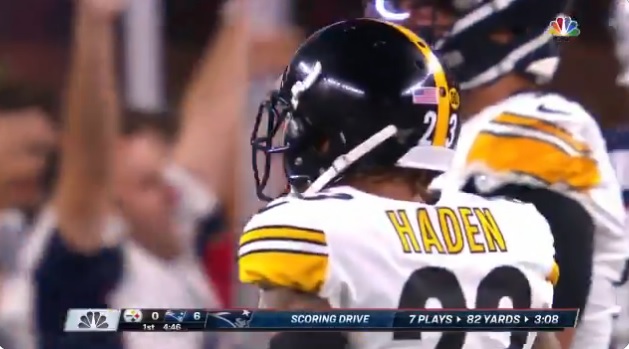 The NFL’s first Sunday night matchup of the season featured two teams that had each won six Super Bowl trophies but tonight, only one team played with a champion’s mentality. That team was the New England Patriots, as they defeated the Pittsburgh Steelers 33-3.

Coming into Sunday’s affair, many believed that the Steelers, powered by a new and improved defense had a chance to deliver a quick blow to the reigning Super Bowl champions but that narrative was nothing more than a fairy-tale tonight. The story for tonight’s game was a familiar one, in fact it was a story that the Steelers have been a part of quite frequently. Plagued by communication issues, poor execution and lack of urgency, the Steelers struggled right out of the gate and never recovered.

Mike Tomlin spoke earlier this week stating that the Steelers could not spot the Patriots any points. The Steelers seemed to be taking Tomlin’s advice, at least for the game’s first ten minutes until a trick pass that saw Tom Brady throw to Julian Edelman who then threw it back to James White for 32-yards into Pittsburgh territory. One play later and Josh Gordon, who was left uncovered, battled his way into the endzone to give the Patriots a 7-0 lead.

The Steelers offense started slow, putting up just 41 yards of offense in the first quarter but instead of picking up steam as the game went on, the Steelers continued to stall. On three consecutive drives in the first half, the Steelers faced either a 3rd and one or 4th and one, and on all three occasions, they came up short.

Brady was given chance after chance to rip apart the Steelers’ defense and that’s exactly what he did. Brady capped off a six play, 80-yard drive by delivering a strike to Phillip Dorsett for a 25-yard touchdown pass up the seam. Stephen Gostkowski would take care of the rest, banking two field goals through the uprights to give the Patriots a 20-0 lead at halftime.

James Washington looked to give the Steelers some breathing room early in the second half. The second-year receiver came down with a 45-yard down catch down the sideline to finally give the Steelers a fighting chance at putting some points on the board. Unfortunately, just like in the first half, the Steelers were unable to convert in a short yardage situation and settled for a field goal from the Patriots one-yard line, narrowing the lead to 20-3.

Those three points would be the only points the Steelers put up all night as the offense struggled with execution constantly. Ben Roethlisberger threw for just over 200 yards with one interception while James Conner failed to crack over thirty yards rushing.

Communication continued to plague the defense into the second half as well. Making his first NFL start, free safety Kameron Kelly made his name known tonight but perhaps for all the wrong reasons. Kelly was picked on constantly in the second half, first allowing Dorsett to get by him for a 58-yard touchdown pass and then allowing Gordon to turn him inside out on a 44-yard pass down the middle of the field, leading to a 30-3 Patriots’ lead.

Many other players making their Steelers’ debut tonight also struggled to make an impact. Free agent acquisition Donte Moncrief had four drops, two coming on fourth down and the other in the endzone. Mark Barron also spent most of his night chasing down Patriots running backs.

The Steelers are set to resume or business next weekend against the Seattle Seahawks at Heinz Field. One thing that is certain is that the Steelers are going to need a spark or boom to recover from tonight’s sluggish start. Next week’s home opener is set to kickoff for 1 p.m. EST.