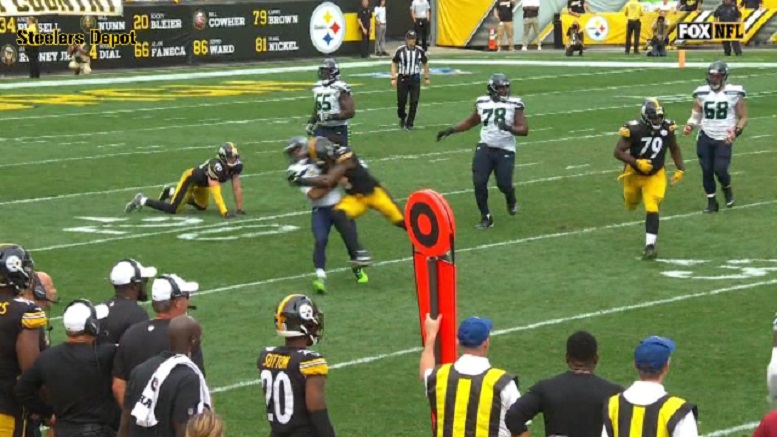 Pittsburgh Steelers outside linebacker Bud Dupree lost part of his Week 2 game check this past week thanks to him being fined for a helmet-to-helmet hit on Seattle Seahawks quarterback Russell Wilson in the fourth quarter of Sunday’s home game.

According to Tom Pelissero of the NFL Network on Saturday, Dupree was fined $21,056 this week for this helmet-to-helmet hit on Wilson at Heinz Field last Sunday. Dupree reportedly said earlier in the week that he didn’t believe he would be fined for his hit on Wilson.

While Dupree was not penalized for his hit on Wilson on that 2nd and 20 play from the Seahawks 27-yard-line with (8:54 left in the fourth quarter, he should’ve been. That play also included Steelers safety Terrell Edmunds being penalized for pass interference on Seahawks wide receiver Tyler Lockett following a challenge by Seattle head coach Pete Carroll.

Initially, Wilson’s deep pass to Lockett in the middle of the field was ruled incomplete but Carroll challenged that pass interference should’ve been called. After an official review of the play was done, the call of an incompleted pass on the field was changed to pass inference on Edmunds.

Dupree was fined for a similar hit on Miami Dolphins quarterback Matt Moore a few years ago.