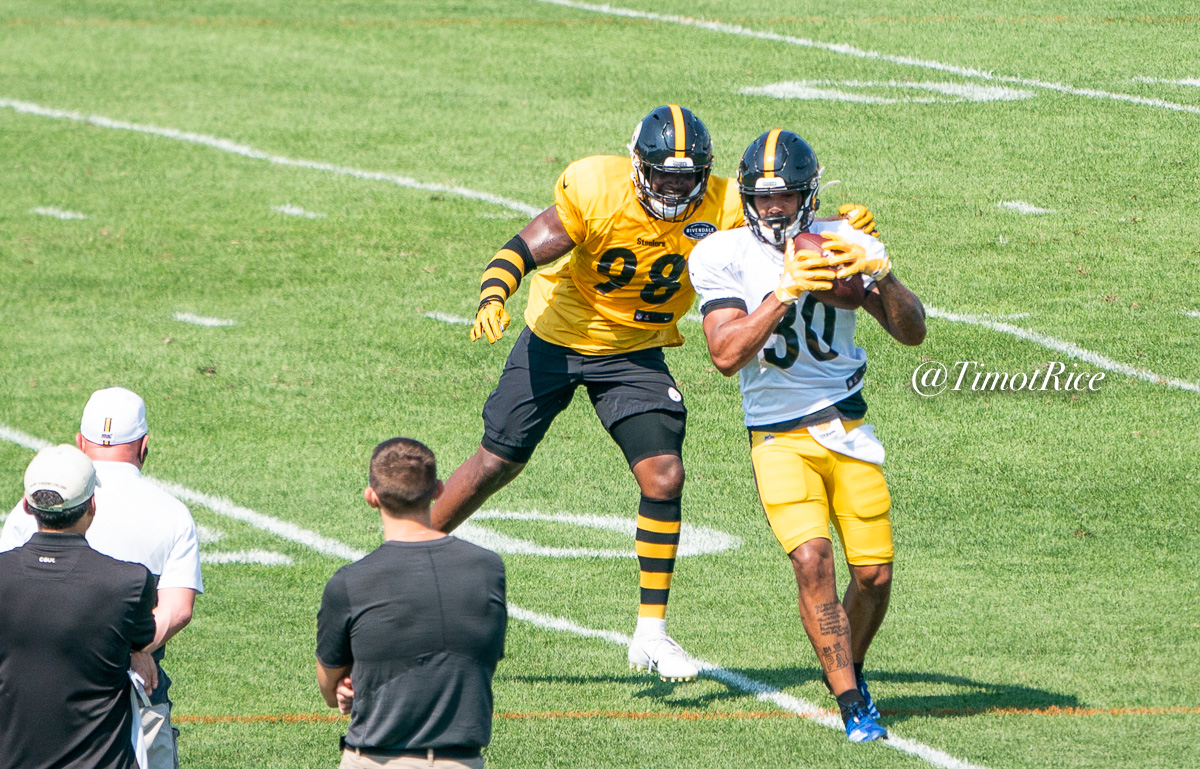 Week One is just a few days away. And most teams – and players – have goals in mind. Numbers to hit in order to have a successful season. That’s what I wanted to do over the next couple days for the Pittsburgh Steelers’ offense, defense, and special teams. The big, tangible goals each unit and the players who make it up should hit in order to help this team win the AFC north and a Super Bowl.

We’ll start with the offense. Let me know your thoughts and what you would add in the comments below.

– Have A Top 5 Red Zone Offense

Analysis: This is the easiest way to deal with Antonio Brown’s loss. If the offense can thrive inside the 20 as they did last year, where their 73.5% mark ranked tops in the NFL and was the best since the 2003 Chiefs, this unit will again be among tops in the NFL.

Understand it will be hard to hit that 73% mark again, there’s natural regression when you hit elite numbers like that, but top five is still reasonable. Over the last five years, the 5th place finish came in at 64.3%. So call 64% the baseline, a decrease from last year but still a very strong number. If the offenses finishes its drives, even if they have fewer opportunities because the group isn’t quite as strong, they’ll rack up a ton of points.

– Cut Red Zone Turnovers In Half

Pittsburgh finished tied for the 2nd most red zone turnovers a year ago. Four in total, all coming on Ben Roethlisberger’s interceptions. There were also plays like Xavier Grimble’s goal line fumble against Denver, I know, but I’m focusing specifically on the red area.

With as much as the Steelers throw it and random chance for that weird turnover, it’s hard to expect zero turnovers, even if that’s obviously ideal. So aim for two. I can live with that.

– Three Wide Receivers With At Least One 100+ Yard Game

This embodies the realization the offense must spread the ball around even more in 2019 sans AB. Three wide receivers doing this during the year would mark the first time it’s happened since 2016 when Brown, Eli Rogers, and Sammie Coates all had such performances. Over the last two years, only AB and JuJu Smith-Schuster have done it.

Of course, there are tight ends and running backs who can get involved too but if three wide receivers do it, it means good things for the development of James Washington and acquisition of Donte Moncrief. Means those guys are making plays. Smith-Schuster is of course a lock to do it several times but he can’t do it alone.

– Roethlisberger Sacked No More Than 25 Times

If the Steelers can accomplish that, it’ll make five straight seasons. Keep the streak alive. Also may mean the team has thrown the ball a little less which probably correlates to wining more games. A very attainable goal given recent history but an important one to set nonetheless.

The number 25 pops up so much in my goals, you guys already know it’s showing up when we discuss the defense, Jim Carrey should be under center.

In six of the Steelers eight playoff appearances under Mike Tomlin, the offense turned the ball over 25 or fewer times in the regular season. In the four seasons they missed? Happened twice and in the other two, they registered 23 and 25 giveaways. So right on the line. Losing the turnover battle is a great way to lose games for obvious reasons.

Roethlisberger led the league with 16 picks last year. On paper, that looks bad. But it’s a product of him throwing the ball until his arm fell off, also leading the NFL with 675 attempts. Put that number in context and he was picked on 2.4% of his passes, his lowest mark since 2014 and fourth lowest of his long career. Cut down on those red zone INTs specifically and turnovers won’t be a concern.

A very obvious one. Conner got so close a year ago, rushing for 973 yards. He would’ve gotten there if not for suffering that pesky ankle sprain late in the year but still, close doesn’t count here. Stay healthy, take care of the ball, and he’ll reach that figure. And hopefully far beyond it.

Maybe it doesn’t sound like a lot but for someone who isn’t exactly going to catch 100 passes, this is more than reasonable. Guys like Tyrell Williams, Robby Anderson, and Mike Williams all had 10 or 11 such plays last year and it’d be huge for this offense if Washington can have that kind of season around the 50-55 receptions he’ll register.

Take it a step further and I would love for Washington to have a season almost identical to what Tyrell Williams did a year ago: 41 receptions, 653 yards, and five touchdowns. Maybe a few more catches but a big play threat who can find the end zone? Sounds good to me.

Written about this plenty of times. McDonald should make a larger impact in the red zone this year based on how 2018 finished up. In September and October, he saw just a pair of red zone targets. November and December? Had eight of them. That trend should continue in a post-AB world.

He finished last year with four touchdowns. Expecting double-digits out of him is too rich for my blood but if he can have six, it’ll be the most by a Steelers’ TE since Heath Miller in 2012. Anything above that and I’ll do a cartwheel.

I know the story’s been for Moncrief to have his best year ever. And I won’t dissuade him from doing that. But even matching his career numbers is good enough for this offense. Those were set in 2015 with the Colts: 64 receptions, 733 yards, and six touchdowns. Copy/paste that into 2019, coupled with what I laid out for Washington and you nearly match what AB did.

Brown’s TDs were a little high last year and generally sat in the 10-13 range. Toss in McDonald celebrating a few more times and the numbers match up almost perfectly. Again, the offense won’t be as good, it’s a whole lot better to generate that production from one guy, not two or three, but it’s a good way to replicate it given the circumstances.

Throwing a bone for the offensive line here. Pouncey had an unusually high number of penalties last year, five of them, the highest since at least 2014. Feiler allowed four sacks in ten starts and his 107 snaps per sack tally was the worst among the starting five. By comparison, Alejandro Villanueva sat at one sack allowed every 160.4 pass sets.