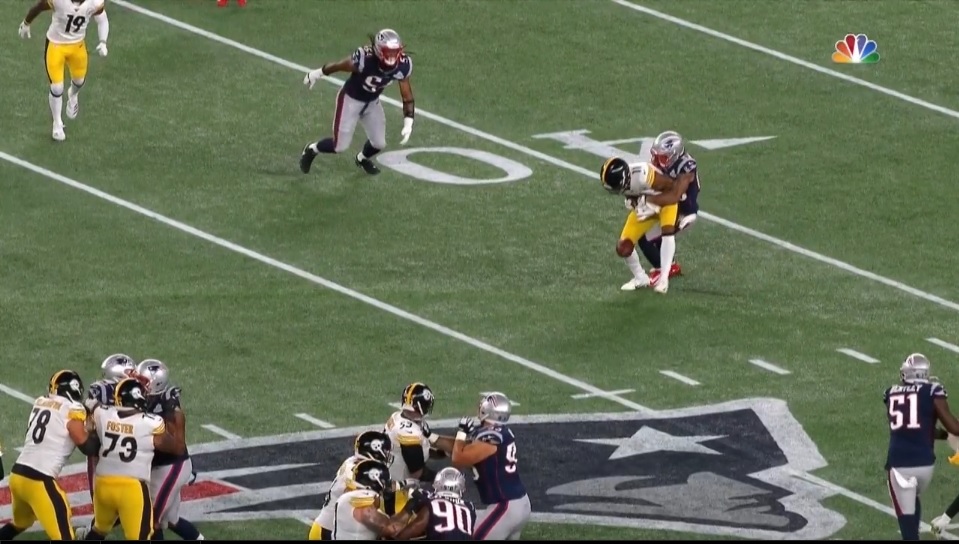 Plenty of weird stats from the Week One opener. Unfortunately, almost none of them are positive. Let’s dive into what should at least be an interesting article.

– The 30 point defeat was the largest in a Steelers’ Week One lost since Dallas whooped them 37-7 in 1997. The good news? Pittsburgh finished the year 11-5 and made it to the AFC Title Game.

– Tom Brady has hosted the Steelers six times in his career, including playoffs. His combined stats?

– The last two Patriot QBs the Steelers have intercepted while playing on the road? Matt Cassel in 2008 and Drew Bledsoe in 1997.

– Donte Moncrief had one of the worst nights any receiver has had in a long time. On ten targets, he caught three passes for seven yards.

Since 1992, as far back as Pro Football Reference tracks targets, he is the 1st Steeler to have fewer than 10 yards on at least ten targets. The only comparable performance is Courtney Hawkins in 1998, who caught three passes for four yards on nine targets. Pittsburgh lost that game to Miami 21-0.

Moncrief is the first NFL wideout with fewer than 10 yards on 10+ targets since Jacksonville’s Cecil Shorts in 2014. Shorts had two grabs for three yards on ten targets that day.

– But Moncrief isn’t alone when it comes to receptions and yards. Since ’92, only three times has a Steelers’ receiver had at least six catches but under 35 yards. Two of them were Ryan Switzer, including what he did last night.

– For only the sixth time, the Steelers rushed for fewer than 35 yards in a season opener. But it’s happened three times since 2013. 13 carries for 32 yards last night.

– The Steelers had just one rushing first down last night. That came on the 4th play of the game, a three yard rush by James Conner on 2nd and 1.

– Devin Bush had 11 total tackles Sunday night. It’s the most tackles in a Week 1, NFL debut by any Steelers’ rookie ever. The previous record was 7, held by TJ Watt. Bush is just the 4th player in the league since 2010 to do so. He joins Xavien Howard, Fred Warner, and TJ Ward.

– Pittsburgh failed to force a turnover last night. Under Mike Tomlin, they are 17-33 when failing to register a takeaway. Here’s how the numbers stack up under his tenure

– One small positive for the Steelers’ defense. New England went 0-3 in the red zone.