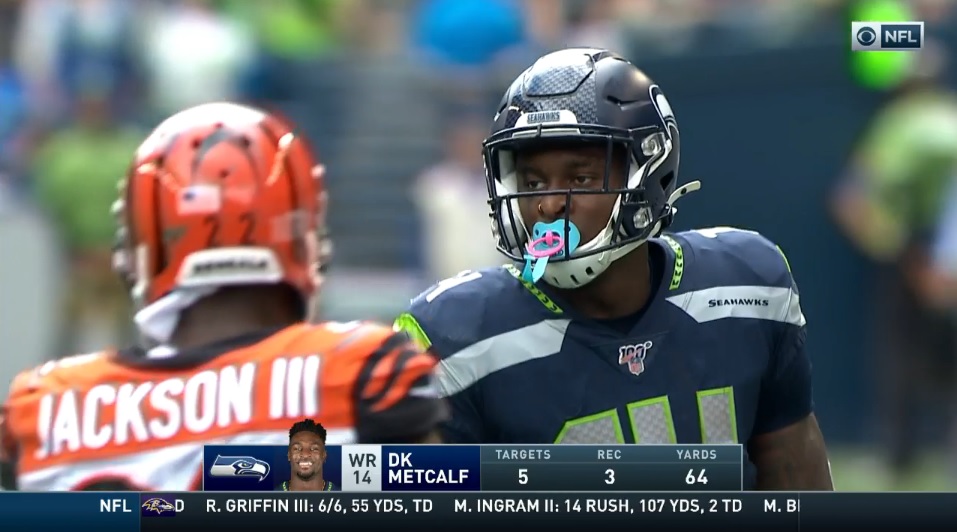 Bread and butter of this offense. They have a supremely underrated running back in Chris Carson, who averaged 4.7 YPC and ran for over 1150 yards last year. Carson was *the* guy last week, carrying 15 times and leading the team with seven targets, catching six of them. His backup, Rashaad Penny, is a former first round pick.

So you gotta stop the run against these guys. Their run scheme is varied. Lot of inside zone, some power with short pulls to kick the three tech, not the end, and they’ll even mix in a FB, Nick Bellore seeing three snaps in the win over the Cincinnati Bengals.

There’s a couple zone reads with Russell Wilson, always a threat to run, but they’re obviously making sure to protect him too. Watch out for it on 3rd down in a critical situation, a “gotta have it down,” but that’s about it.

Gameplans can evolve week to week but true to their identity, Seattle wants to run the ball on early downs. 22 rush attempts to 11 passes on 1st and 2nd down last week despite being in a close game. Carson had ten touches on 1st down, seven rushing and three receiving.

One last thing. On nine snaps last week, they used a 6th offensive linemen to bolster the run game. #74, George Fant. Watch out for him. He’s next to the RT in that above clip.

Team loves playaction. Let’s get that out of the way early. New England was highly effective using it and you can bet Seattle will try the same. Yankee concepts, post + over to outleverage man coverage and flood zone. This play resulted in a sack but you can see the concept. If Wilson gets time, watch out.

Steelers will have to use their adjustment of the CB on the over passing it off to the safety and playing the deep middle when they’re in Cover 3. Didn’t have that last week and it allowed a 24 yard play to Julian Edelman.

If they get single high looks, they’ll target their big receivers on the outside. DK Metcalf averaged 22 yards per reception on six targets (four receptions) last week and the Steelers’ corners will have to contest better at the catch point. Metcalf bottom of the screen here, a 42 yard gain.

Tyler Lockett had just two targets versus Cincinnati but one went for a 44 yard touchdown and the other should’ve been caught for an explosive play. He’s a big play threat and they’ll use man beaters, like New England last week, to help open him up if defenses hone in on him.

It’s Seahawks week, Steelers fans! With that comes another well-oiled offensive machine, albeit without the dominant offensive line play.

Despite having future Hall of Fame quarterback Russell Wilson in the midst of his prime, the Seahawks have become a run-first, smash mouth offense that wants to establish the run and then some under second-year offensive coordinator Brian Schottenheimer.

Last season came to a tough end for the Seahawks as Schottenheimer didn’t let Wilson do his thing in the Wild Card round loss to the Dallas Cowboys. Schottenheimer ran the football over and over and over again in an attempt to establish the run, which became the go-to saying in Seattle this off-season.

Fortunately for the Seahawks and their fans, Schottenheimer learned from his mistakes, for at least the first week of the season, and let Wilson do his thing, especially off of play-action.

Right now, there might not be a better quarterback in football throwing off of play action than Wilson.

Here against the Los Angeles Chargers in the preseason, Schottenheimer put Wilson on the move off of play-action, rolling him out to his right for an easy pitch and catch with top target Tyler Lockett for the first down.

With Seattle’s protection woes, it’s important for Schottenheimer to move the pocket for Wilson, especially off of play action. If Wilson isn’t stuck in the middle of a collapsing pocket, he’s able to really dissect teams with his arm.

Against the Cowboys in the Wild Card loss, Wilson and Lockett destroyed Dallas’s secondary on play-action passes, mostly with Lockett lined up in the slot.

Notice the pocket is shifted slightly after the play fake, allowing Wilson to roll slightly and set up for a wide-open hookup with Lockett down the field.

Flash forward to Week 1 against the Cincinnati Bengals and there’s Lockett in the slot working deep on a play-action pass from Wilson.

This one came out of shotgun and was more of a read-option with a post route on the backside, but it’s a deadly triple combination for Seattle with Wilson, Lockett, and play-action passes.

Tom Brady and the New England Patriots killed the Steelers on Sunday night with play-action passes, so expect quite a few play-action throws from Wilson on Sunday afternoon at Heinz Field.

Seattle’s wide receiver room isn’t very deep, but it has some high-end talent. Lockett has a chance to become a great receiver in the NFL now that Doug Baldwin retired, shifting the former Kansas State star into the No. 1 role. He’s a burner that is also a great route runner and has a knack for making contested catches despite his small, rail-thin frame.

Rookie D.K. Metcalf had a great game last week against the Bengals and looks to be the real deal at receiver. What a steal he was for the Seahawks, falling to the second round after many (including myself) felt he shouldn’t fall outside of the top 10.

That said, Brown and Moore have flashed big-play abilities in the past, which could take some pressure off of Lockett and Metcalf this week.

Wilson and the Seahawks sure do like to use their running backs as receivers out of the backfield though. Chris Carson might be one of the most underrated complete backs in the NFL right now.

Carson finished fifth in the league last season in rushing yards and got off to a strong start on Sunday, scoring two touchdowns (one on the ground, one through the air). Last season, Carson caught just 20 passes, but the Seahawks made it a point to get him more involved through the air, and he started strong in Week 1, hauling in 6 passes and a touchdown.

After the catch, Carson is a punishing running that has some elusiveness to his game. You have to gang tackle this guy, because he’ll do things like this with the ball in his hands.

All that said, I like Rashaad Penny a bit more than Carson, especially as a runner.

Here against the Cowboys in the playoffs last season, Penny sparked Seattle to open the second half with this 28-yard run.

I love the design up front to cave in the left side of the Cowboys’ front 7, giving Penny space to work. Once he clears the second level, I love the way he sets up his block from Ed Dickson, sending him off to the races.

Seattle will lean on both Penny and Carson on the ground, so expect to see quite a bit of both as runners on Sunday.

I mentioned earlier the offensive line woes, and it might get worse on Sunday for Seattle. Four offensive linemen appear on the injury report in Joey Hunt, Justin Britt, Duane Brown, and Mike Iupati.

Fortunately, Brown, Iupati and Britt appear to be a go for Sunday, although they’ll likely still be dealing with ailments.

DJ Fluker has been better after sliding inside to right guard last season, but right tackle Germain Ifedi is bad. I don’t mean that lightly.

If you remember reading my scouting report on him coming out of Texas A&M, you’ll remember I didn’t like him as a prospect one bit. Seattle went out and spent a first round pick on him. He’s a terrible pass blocker that TJ Watt should dominate, and he’s really not very consistent as a pass blocker.

Tight ends Nick Vannett and Will Dissly are a solid pairing, with Dissly serving as the primary run blocker. That said, Dissly is a sneaky-good pass-catching tight end that has great chemistry with Wilson.

On special teams, punter Michael Dickson is arguably the best punter in football. He has a huge leg, is really good at directional kicking, and has a real talent for dropping punts deep in the opponent’s territory, setting Seattle’s defense up in great position.

Kicker Jason Myers is a journeyman kicker who is coming off of a terrific season in New York with the Jets, going 33-for-36 last season. He hasn’t attempted a field goal yet this season, but he does own an 84.3 percent success rate for his career after stints with Jacksonville and New York in his 5-year career.

Lockett serves as the primary kick and punt returner for the Seahawks. He’s back there not only for his game-breaking abilities, but also for his terrific hands. He’ll rarely muff a punt, knows when to fair catch it, and when to let it bounce. You won’t fool Lockett.

If the Seahawks want to limit Lockett’s workload after dealing with a back injury this week, we could see Penny and rookie defensive back Ugo Amadi returning kicks and punts on Sunday.