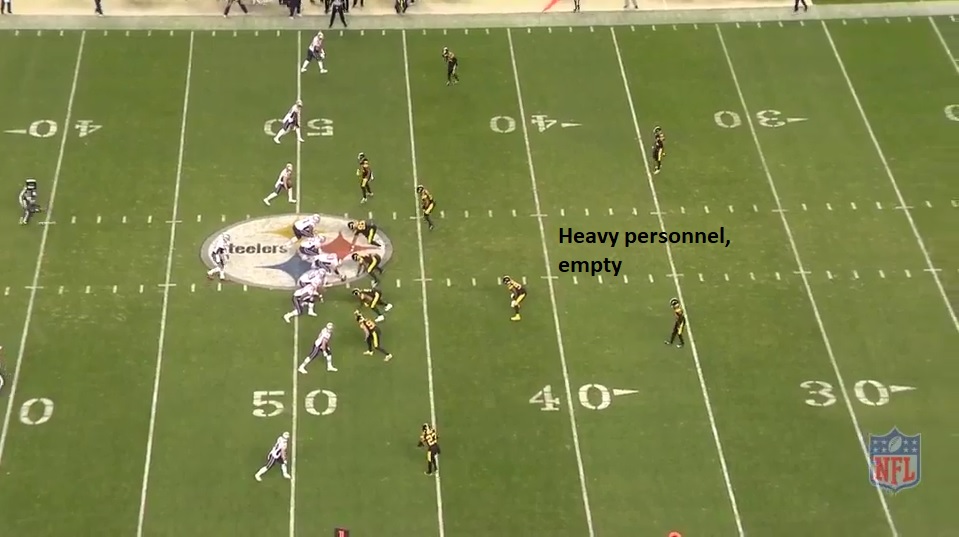 Admittedly, it is a bit difficult to delve into scheme for a Week One opponent, even if it’s one the Steelers know well. Never know what a team’s gameplan is going to be especially for an organization as malleable as the Pats. One thing you can expect is their ability to zig when everyone else zags. As the league has used smaller defenders, sub-package football, and a focus on coverage, the Patriots have no problem going old-school.

Only the 49ers used a FB on more snaps than New England used James Develin in 2018. Don’t be surprised if they open up in heavy, 21 personnel Sunday night. I studied three games. Week 15 last year against Pittsburgh, the Super Bowl vs Los Angeles, and the third preseason game versus Carolina.

Against the Steelers, the Pats used a FB on the first three plays of their opening series and used it on four straight the next one, only interrupted by a 3rd and 8. In the Super Bowl, a FB was used on three of the first five plays (they wham blocked Suh on the very first snap), and against the Panthers, began the first two plays with Develin in the backfield.

Don’t get it twisted either. They don’t run just Lead Strong with #46 in there. Here they are running zone out of two back.

And here they are, and this isn’t new, to be clear, of them going empty set. Force defenses to stay in base but spread them out. Put players in uncomfortable situations. Make them function in space. Expect the same to happen in Week One.

Want to stick with talking about the backfield for a moment. Steelers fans love talking about Pony looks with 2 RBs on the field. It actually happens in New England. Especially given their shaky TE depth, expect to see James White and Rex Burkhead on the field on some 3rd downs this weekend.

Again, idea is to get their RBs on LBs and win one on one.

And if you play zone coverage? Patriots receivers, now filled with veterans, always have sight adjustments. Ability to run their route based on the coverage the defense plays. Get soft, Cover 3? Convert that vertical 9 route into a curl. Pitch and catch.

Not exactly high-level stuff, every team does this, but a reason why the Steelers old “tackle the catch” mentality didn’t work. They’re playing a lot more man coverage and that’s your best chance of slowing Brady and company down.

On Sunday night in front of a national audience on NBC, the Pittsburgh Steelers travel to Foxboro to take on the new-look New England Patriots on a night in which the Patriots raise their sixth Super Bowl banner, matching the Steelers with six Lombardi Trophies.

Despite the number of changes New England went through on offense – the retirement of tight end Rob Gronkowski, the medical issue for center David Andrews, and the loss of left tackle Trent Brown in free agency, the Patriots still return the masterminds in head coach Bill Belichick and quarterback Tom Brady.

That doesn’t even mention the likes of wide receiver Julian Edelman and second-year running back Sony Michel.

The names might change, but as long as Belichick and Brady are around, the Patriots will continue to roll like a well-oiled machine.

During the preseason, Michel picked up right where he left off in the playoffs and the Super Bowl, looking like a real power back with added elusiveness to his games. This is a guy who racked up two straight 100-yard rushing games and three touchdowns in the wins over the Los Angeles Chargers and the Kansas City Chiefs, before scoring the game-winning touchdown in the Super Bowl, amassing 94 yards on the ground.

It’s clear exactly what type of offense this Patriots team wants to be: a power rushing attack with the occasional throw mixed in to keep defenses off balance.

New England runs a number of different schemes offensively, but lately they’ve featured an I-formation ground attack with the likes of Michel, and fullback James Develin carrying much of the load. One thing I’ve seen them run over and over and over again is the I-formation lead draw.

Here against the Chargers in the divisional round last season, Michel ran the I-formation lead draw to perfection. Right guard Shaq Mason and right tackle Marcus Cannon return this year, and they were instrumental in Michel scoring here.

Watch Cannon seal off a wall between the defender and Michel right away, while Mason turns the initial Chargers defender just enough to create an alley for Michel to burst through, getting to top speed quickly to outrace the safety to the pylon for the score, igniting the route.

Thanks to Michel’s tough, successful running, the Patriots were able to re-identify themselves as a power-rushing team first, with a mixture of play-action passes and screens to really keep defenses off-balance.

Against the Chiefs in the AFC Championship Game, the Patriots really did damage on play-action fakes, causing just enough hesitation from the Chiefs’ linebackers to let Edelman and Gronkowsi work successfully over the middle.

Watch the Kansas City linebackers as soon as the ball is snapped and Brady shows the football to Rex Burkhead on the play-action fake.

Look at the way they slide downhill, leaving a wide-open field behind them, where Edelman slips to for the easy pitch and catch.

Edelman did this throughout the post season, even into the Super Bowl; don’t expect those types of plays to disappear anytime soon.

One thing the Patriots’ offense does really, really well is pre-snap motions to get guys into matchups that they can win at a high rate.

I saw a lot of this in the post-season, especially with a guy like Phillip Dorsett, who realistically should slide into the Chris Hogan role as the deep threat and a trusted target for Brady.

Against the Chiefs once again, the Patriots motioned Edelman into a split, offset stack with Dorsett in the slot, forcing the Chiefs to switch coverage assignments seconds before the snap.

That’s current Steelers cornerback Steven Nelson who gets beat by Dorsett’s double move here for the touchdown. The Patriots went at Nelson a ton in the championship game, so I’m expecting a heavy dosage of the same once again.

While Brady did lose Hogan, Gronkowski, and the trusted Andrews up front, he has a deep wide receivers room to work with, as well as a strong offensive line up front and a highly successful power run game to lean on.

Make no mistake though: Brady can still carve up even the most successful defenses if given time and space to operate.

Add in the additional talent at wide receiver with Dorsett eyeing a bigger role, Edelman back as the rock, and a well-regarded rookie in Jakobi Meyers, it could be another great year for the Patriots.

Behind Michel in the backfield, Burkhead and James White are back in the same roles; don’t expect the workload or the assignments to change. Burkhead is the change of pace guy who can run and catch, while White is one of the best receiving backs in football.

At tight end, the Patriots have a black hole to fill, but they’re going to try with the likes of Matt LaCosse, a Denver Broncos castoff, and Ryan Izzo – a 2018 7th round draft pick entering Year 2 in the system.

If the preseason was any small indication, Izzo is going to be the go-to tight end while veteran Benjamin Watson recovers from a concussion and starts a 4-game suspension, and Lance Kendricks serves a 1-game suspension.

Izzo flashed some serious hands against the Carolina Panthers in the third week of the preseason, working up the seam.

This is another play-action pass, but this one doesn’t freeze the linebacker like the Patriots hope. Instead, Brady threads the needle and puts the ball where only Izzo can make a play. Credit to the second-year tight end for making the play.

Along the offensive line, second-year pro Isaiah Wynn – a first rounder last year that missed the entire season due to a torn Achilles, slides into Trent Brown’s spot after Brown signed a monster contract with the Oakland Raiders.

Wynn was a great tackle in college at the University of Georgia, so working under offensive line guru Dante Scarnecchia should really elevate Wynn’s game to an elite level.

Ted Karras will replace Andrews at center, so there might be a few hiccups there in the first few weeks. Left guard Joe Thuney returns to form a great duo with Mason at right guard, while Cannon also returns at right tackle.

It really doesn’t matter who’s up front right now under Scarnecchia; he’s that good of a coach that can get the best out of any unit he’s given.

On special teams, kicker Stephen Gostkowski returns coming off of a down year where he really struggled with consistency. He’s historically an accurate kicker though, so he should once again be a solid kicker for the Patriots to work with.

The Patriots did surprisingly release veteran punter Ryan Allen, but draft pick Jake Bailey outplayed him, allowing New England to save some money at punter. He’s got a big leg and is quite athletic, so watch out for some fake punts.

Matthew Slater also returns as the do-everything special teams ace for New England, while Edelman returns as the punt returner for the Patriots. Slater is currently listed on the depth chart as the kick returner, so it will be interesting to see who is the full-time kick returner this season under Belichick.