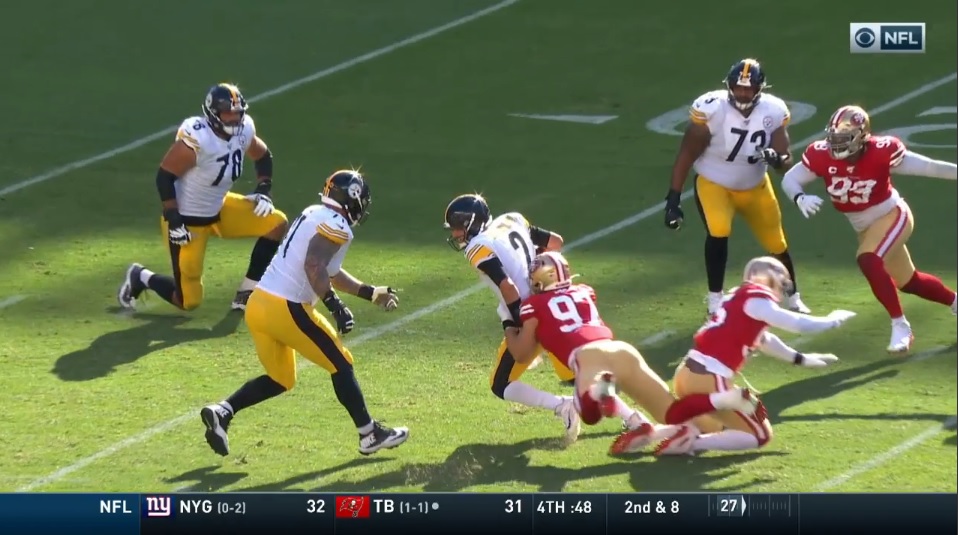 Two sacks to recap from Week 3’s loss to the San Francisco 49ers. Let’s break them down.

Tough spot here for RT Matt Feiler. LDE Dee Ford in a wide nine type alignment. Feiler probably has to do a better job getting depth/width here but has to protect the B gap from any interior blitz where he may need to pick up #54. And he lacks the athleticism of say, a prime Marcus Gilbert, to slide and seal the edge upfield.

Ford chases Rudolph down from behind and sacks him, forcing the Steelers to punt after being on the cusp of field goal range. Missed chance for points after the only lengthy drive of the first half.

Nothing open downfield and though a minor point that could be debated, I don’t love Fichtner asking Rudolph to take a five step drop out of the gun on 3rd and 4 with relatively short route combinations. Deeper drop makes it harder for the tackle to seal it. But blame will go to Feiler here.

Rudolph has plenty of time here but nowhere to go with it. 49ers dropping seven into coverage and still generating pressure with a four man rush. Route tree is poor, every route vertical, isolated, dependent on the receivers winning their individual matchups. Bad approach for a group that’s struggled so much especially late in the game, on 3rd down, where you as an offensive coordinator better call your best plays. 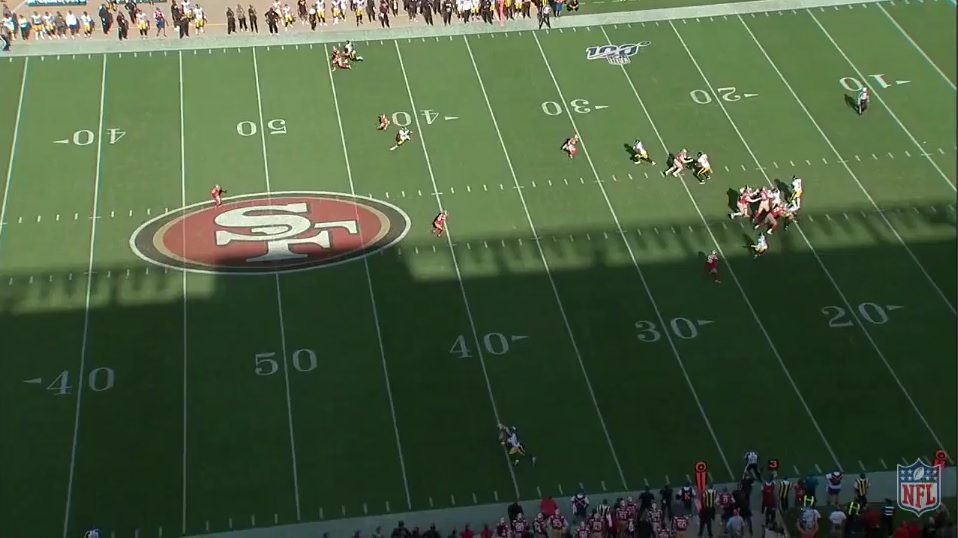 On the line, RDE Nick Bosa absolutely just runs over and through Alejandro Villanueva. Villy may have stepped on Ramon Foster’s foot but he was losing this battle regardless. Bosa converting speed to power on his bull rush, uprighting Villanueva and lifting him up.

Forces Rudolph to escape the pocket and goes down the very end end, fumbling the ball, recovered by Feiler.

Villanueva allowed the initial pressure but Fichtner’s long-developing scheme didn’t do the offense any favors. Steelers needed to chew up yards in a hurry but they still had a timeout remaining and could’ve used the middle of the field.

Blame: Half on Villanueva, half on Fichtner