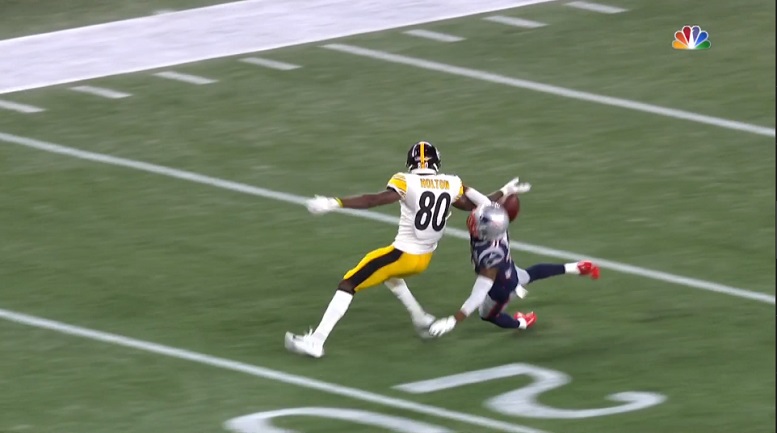 The Pittsburgh Steelers offense certainly had problems moving the football both on the ground and through the air Sunday night in the 2019 regular season opener against the New England Patriots. While Steelers quarterback Ben Roethlisberger did manage to complete 27 passes Sunday night in the team’s blowout loss to the Patriots, 12 of those completions came in the last three offensive possessions in the fourth quarter and this when the game was already decided.

While several of Roethlisberger’s incompleted passes Sunday night were results of drops, the most glaring statistic to come out of all of his pass attempts against the Patriots is the fact that he only managed to complete just 4 of his 15 pass attempts that flew 10 or more yards in the air past the original line of scrimmage, according to our early game charting. Two of those four completions also came in the final three offensive possessions.

Of the seven pass attempts that Roethlisberger had that flew 20 or more yards down the field, only one, a deep pass to wide receiver James Washington down the right side early in the third quarter was completed.

After the Sunday night loss, Roethlisberger was asked about his failure to connect deep more than once against the Patriots.

“Yeah, just, you know, I didn’t connect on them,” Roethlisberger said. “I have to go back and remember each one but overthrew one. I know we did get James on another one and that’s me not making the throw I need to make.”

The one deep pass that Roethlisberger did connect on Sunday came on a third and 10 and gained 45 yards. On that play, Washington was facing man coverage from Patriots cornerback Jason McCourty and the second-year receiver was able to get separation while the ball was in the air and Roethlisberger threw it where only his teammate could catch it.

“You got to take it,” Roethlisberger said of that lone deep completion to Washington Sunday night. “You’re trying to find the singled guy because this defense does a great job of doubling one guy, two guys and mix and matching it. So, you try and find the singles if you can.”

Last season, Roethlisberger got off to a poor start regarding his pass completion percentage on ultra-deep passes of 20 yards or longer. It wasn’t until the second half of the regular season until he started to complete more of those passes more frequently.

If there’s anything positive to take away from Sunday night regarding those deep pass attempts, it’s the fact that Washington was at least on the receiving end of the completed one. Washington had a dismal first three quarters of his 2018 rookie season before finally seemingly turning things around in the final four games. That said, Washington only had two total receptions Sunday night against the Patriots with his second of the two coming on the third to last play of the game. Of the four other targeted passes from Roethlisberger to Washington, one was intercepted by Patriots safety Devin McCourty in the end zone.