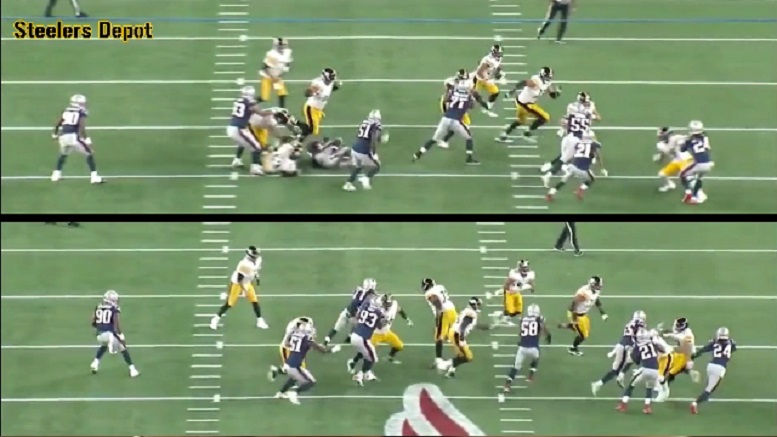 The Pittsburgh Steelers offense failed to convert several short-yardage situations during their Sunday night road loss the New England Patriots and three of those four fails came in the second quarter. The first failed short-yardage opportunity of the game for the Steelers offense happened with 10:40 left in the second quarter and on a third-and-one run play to the right of center from the Steelers 30-yard-line. That run failure from running back James Conner may have gotten inside the head of Steelers offensive coordinator Randy Fichtner for future short-yardage play calls, according to what quarterback Ben Roethlisberger said on Wednesday.

“Well, coach Randy said, you know I think the first one was the third short that we tried to run it and didn’t get it and I think, I’m sure you guys will talk to the Coach [Fichtner] tomorrow when you speak to him, he kinda told us that that frustrated him and maybe shied him away a little bit from doing it the next couple of times,” Roethlisberger said. “But you know what, when it comes down to it, we need to execute and whether it’s third and long or third and short, we just all need to be better.”

after that first failed third-and-one conversion, the Steelers offense failed on another one on their very next drive. That play, a crack toss to Conner to the left, was blown up quite easily by the Patriots defense for a loss of 4 yards. To make matters worse, it was the same play the Steelers ran just two plays earlier on first down that gained 5 yards. Watch how Patriots linebacker Jamie Collins (58) plays the second one and where he’s lined up at. Look at where Conner is lined up at in both. Conner looks like he’s too far left on the second play and that makes Collins line up a bit wider as well. There’s no way center Maurkice Pouncey is going to be able to cut Collins off.

With two failed short yardage run fails now in the books, I bet Fichtner was spooked a little moving forward. That said, the Steelers next shortage opportunity, a fourth-and-one from the Patriots 47-yard-line with 2:00 left in the first half, was originally set to be 11 personnel with Roethlisberger under center and Conner lined up directly behind him. Roethlisberger, however, didn’t like what he saw defensively from the Patriots, so he called a timeout.

After the timeout, the Steelers came out with five wide receivers and Roethlisberger in the shotgun. The play call was fine, a short zone-concept, but unfortunately the short pass from Roethlisberger to wide receiver Donte Moncrief was dropped. That was a huge failed short-yardage opportunity for the Steelers offense and a big turning point in the game,

The fourth and final failed short-yardage opportunity for the Steelers offense came in the third quarter with 10:23. It was a third-and-one from the Patriots 1-yard-line and with a bunch formation to the left and Conner in the backfield as right sidecar to Roethlisberger, a fade pass to Moncrief went incomplete. Moncrief seemingly turned the wrong way to find the football. Head coach Mike Tomlin then decided to kick a field goal, a very poor decision in my opinion.

Fichtner should’ve probably tried a different running inside zone play or two on that third and fourth down from the Patriots 1-yard-line. However, it seemed like he had any confidence in the short-yardage running game due to the earlier fails.

On Thursday, Fichtner will meet the media for his weekly press conference and it will be interesting to see if he’s asked about his Sunday night short-yardage play selection and if indeed he shied away from runs due to the first and second run play fails in the second quarter.