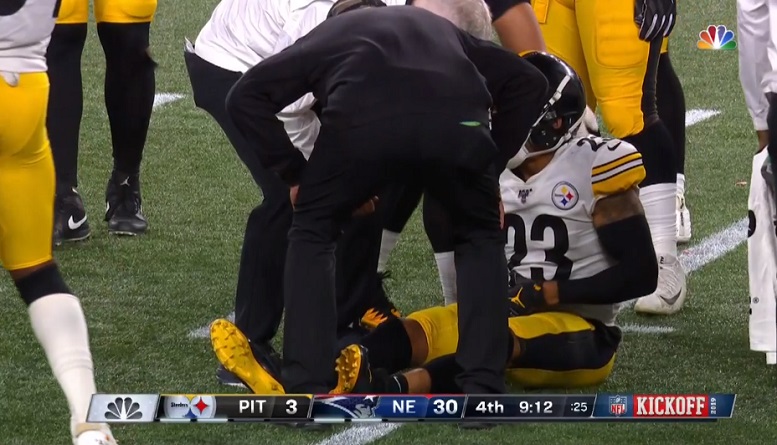 Pittsburgh Steelers cornerback Joe Haden was one of four players injured in the fourth quarter of the team’s Sunday night loss to the New England Patriots and while he seemingly missed just one play, it will now be interesting to see how it impacts him this coming week due to a Monday update on his status.

#Steelers CB Joe Haden, who went down with a shoulder injury in the loss to the #Patriots, has a sprained AC joint, source said.

According to Ian Rapoport of the NFL Network on Monday, Haden, who missed all of the preseason with an ankle injury that he suffered during training camp, suffered a sprained AC joint in his shoulder Sunday night in the regular season opener against the Patriots.

Steelers head coach Mike Tomlin will next meet the media on Tuesday and at that time he might reveal more about Haden’s most recent injury and whether or not the veteran cornerback will be able to practice at the beginning of the week. Fourth-year cornerback Artie Burns replaced Haden for the one

With Haden being able to return to the Sunday night game after suffering his injury, perhaps he’ll be able to play next Sunday against the Seattle Seahawks. Last week the Steelers signed Haden to a two-year, $22 million contract extension and that deal runs through the 2021 season.

In other injury news, it’s believed that Steelers center Maurice Pouncey should be fine when it comes to the ankle injury he suffered in the fourth quarter of the Sunday night loss to the Patriots. According to Ed Bouchette of The Athletic, some Steelers players said that Pouncey was upbeat about his ankle on Monday. Pouncey did not return after suffering his ankle injury and backup canter B.J. Finney replaced him and plated the final 15 offensive snaps.

As for Steelers wide receiver JuJu Smith-Schuster, who reportedly suffered a toe injury during the fourth quarter against the Patriots, Rapoport reports Monday morning that his subsequent x-rays were negative and that he’s supposedly going to be fine.

#Steelers WR JuJu Smith-Schuster, who was spotted going into the X-Ray room last night, is going to be fine, source said. X-Rays negative and it all came out ok.