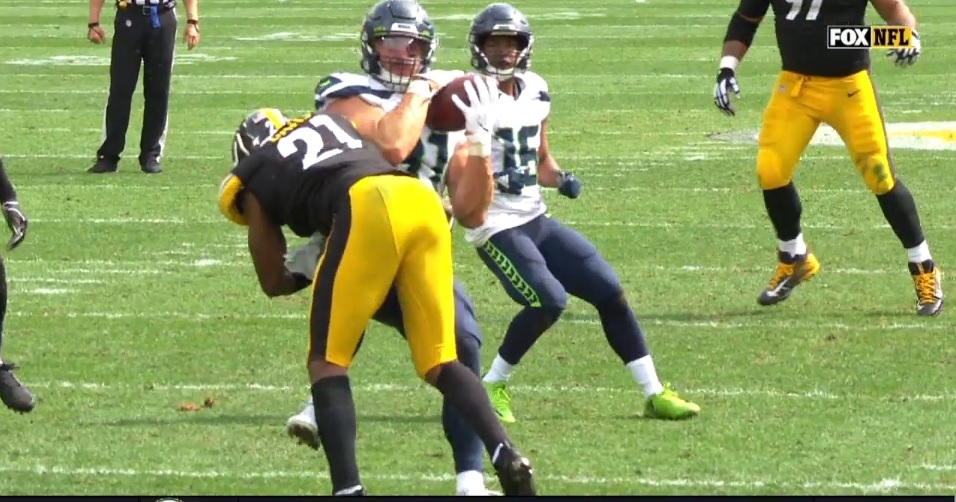 The Pittsburgh Steelers acquired tight end Nick Vannett from the Seattle Seahawks via a trade Tuesday night and apparently they had been in pursuit of the Ohio State product for quite a while.

During his Wednesday press conference, Seahawks head coach Pete Carroll reportedly said that the Steelers had been pursuing Vannett for some time and that Seattle general manager John Schneider finally decided to pull the trigger on the deal that netted his team a 2020 fifth-round draft pick.

Pete Carroll confirms that Luke Willson is back with the Seahawks. Said the Steelers had been after Nick Vannett for a while.

Pete Carroll said the Steelers had been chasing Nick Vannett for a while now. John Schneider finally pulled the trigger on a deal.

“I’m very familiar with him,” Tomlin said. “Ohio State’s one of the schools that I’m at kind of annually and so you got a good feel for some of those guys. I remember looking at specifically he and his pro day. But you couple that also with that we just played those guys [the Seahawks] a short number of weeks ago so I familiarized myself with him in today’s ball in terms of the things that he provided against them.

“He made a few plays against us a week ago, vertical passing game and so forth, that really kind of is consistent with what we’ve expected and seen from him. And also, he was a handy teamer. I mean, this is a guy that started on their punt team and their kickoff return team against us just two weeks ago. So, you know, he has an opportunity to be helpful to us even if Vance [McDonald] runs the course and is able to be available to us in the game [Monday night].”

In the Steelers Week 2 home loss against the Seahawks Vannett had a key early third quarter catch on a 3rd and 10 from the Steelers 25-yard-line that was good for 13 yards. Vannett held on to that football despite taking a bit hit from Steelers safety Sean Davis. After converting that third down the Seahawks scored on the very next play to take the lead. Vannett ultimately played 33 offensive snaps for the Seahawks in that game and another 11 on special teams.

While the Steelers may have been in pursuit of Vannett for a while, their urgency to acquire him Tuesday night likely increased due to tight ends Vance McDonald and Xavier Grimble both getting injured in Sunday’s loss to the San Francisco 49ers. While McDonald’s shoulder injury isn’t expected to be long-term, the reported calf injury suffered by Grimble later in Sunday’s game has now resulted in him being placed on the team’s Reserve/Injured list Wednesday afternoon.

The Steelers hope that the addition of Vannett will help the offensive running game moving forward, according to Tomlin on Wednesday

“So, we got some things to clean up there. I think that’s one of the reasons why we acquired Nick and went out and acquired Nick,” Tomlin said.

It will now be interesting to see how much Vannett helps the Steelers offense moving forward and if the team can wind up keeping past this season as the tight end is currently in the final year of his rookie contract and thus set to become an unrestricted free agent after the season is over with.