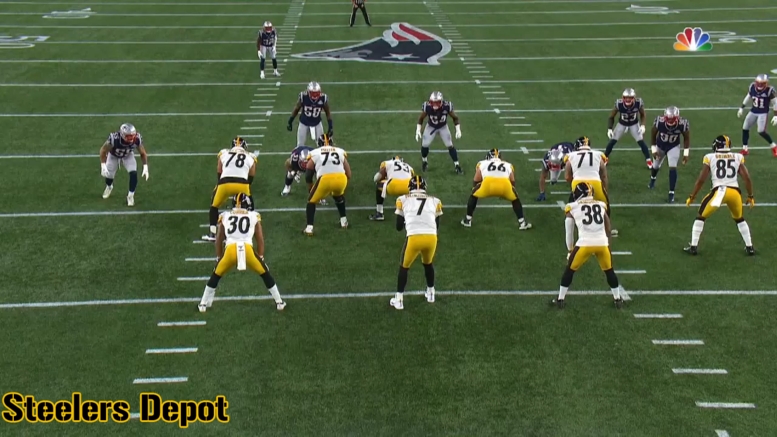 One element that the Pittsburgh Steelers have been talking about bringing to their offense this season has been a true ‘pony’ backfield, featuring two halfbacks being used simultaneously. In today’s NFL, you can’t be choosy, so even if one of the backs is lining up in the slot on the play, it will still be classified that way.

We heard this being discussed a lot in the Spring between James Conner and Jaylen Samuels, both of whom were excited and on board with the idea, but then we didn’t see it used at all during the preseason (we even saw it last year in the preseason), and it was only used sparsely in training camp.

The Steelers did, however, present that look on Sunday against the New England Patriots, with both Conner and Samuels on the field together. They played out of it twice on consecutive carries to begin their second drive of the game. The first was a two-yard run by Samuels, with Conner blocking, and the second resulted in a Samuels reception for no gain that was wiped out due to a holding call.

It wasn’t very successful. Perhaps if it were, we would have seen it more. But with the game circumstances, offensive coordinator Randy Fichtner could not justify it, so instead they began to play more four- and five-receiver sets. He told reporters yesterday that it was a bigger part of the gameplan than we saw.

“We actually went into the game with a pretty extensive pony package where we would have both of our running backs in the game at the same time”, he said, via a transcript provided by the team’s media department. “It’s a unique balance in trying to keep certain guys fresh in certain packages, especially early in the season. And it just never seemed like it flowed enough that we every really truly got in any of them”.

The Steelers last experimented with this in 2015 while they had Le’Veon Bell and DeAngelo Williams, but the pairing of Conner and Samuels would make more sense. With Conner as the lead back and more of a runner, and Samuels with more extensive background in receiving, it could work. Conner even has some defensive background, and is strong in pass protection, so it’s not too much to expect him to throw a block or two once a week at most.

Given that the Steelers planned for, in Fichtner’s words, a “extensive” pony package on Sunday, one can only wonder if that was gameplanned specifically for the Patriots or if that’s something they intend to utilize meaningfully throughout the year.

He did make good on adopting the four- and five-receiver sets as a significant part of the offense once he became offensive coordinator last year, so it wouldn’t surprise me if he is able to stick to this and make use of it, provided that they can actually run it effectively—which they failed to do in New England.