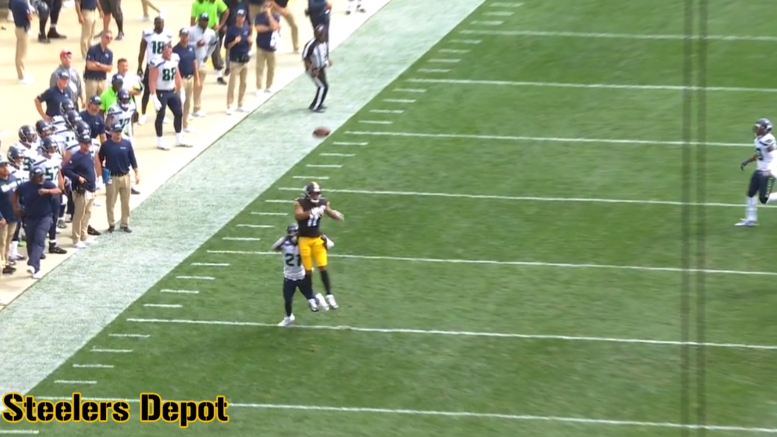 When the Pittsburgh Steelers made preparations for life after Antonio Brown once they concluded that trading him had become a necessity, they weren’t envisioning the early struggles of that primary replacement part, which is veteran wide receiver Donte Moncrief. The sixth-year veteran has dropped more passes than he has caught through two weeks, and could be in-line for a stay in the doghouse.

Moncrief played fewer than 20 snaps on Sunday against the Seattle Seahawks, none after he dropped the one pass that came his way, a third-and-eight that he popped up into the air, allowing it to be intercepted.

He talked during the week about how he is putting too much pressure on himself and thinking too much, and how he just needs to get that one catch under his belt to get himself, mentally, back on track. It’s not entirely clear if the Steelers intend to take that course with him, presuming him to continue immediately as the number two target.

That was the sentiment expressed by Steelers head coach Mike Tomlin on Tuesday during his pre-game press conference, and a theme that continues Thursday when offensive coordinator Randy Ficthner spoke to the media and was asked about Moncrief and why he is struggling.

“It is hard to answer”, he said. “I don’t know. You are not in anyone’s mind. Any physical limitations or mental limitations, that is a question he would have to answer for you from that stand point. I just know I had a coach a long time ago say that you have to put the word receive into receiver. That is your job number one. Receive the football. Catch it, then turn”.

That slightly ominous remark may imply a hesitance on the coaches’ part to get him back out on the field, at least in a prominent role, unless or until they feel comfortable with his ability to receiver, and then catch, the football, and that they are not at the point with him now.

Moncrief played just one snap in the second half, and that was the pass that he dropped. 21 of the 24 snaps that followed his drop were taken over by Diontae Johnson, who played every snap with more than one wide receiver on the field from that point forward.

It would be very interesting to have had the chance to watch practice this week to see who was playing where. Is Johnson the one running with the first-team defense? What sort of opportunities is Moncrief being afforded? And where does James Washington fit in?

Much of their plan going forward will have to be tailored to the new quarterback, Mason Rudolph, and those with whom he has a rapport. Washington did not see a lot of time on the field in the second half, only 10 snaps, a handful of which were in those one-receiver packages, but Tomlin said on Tuesday that his having a bigger role could be an “unintended consequence” of having Rudolph, his college teammate, under center.