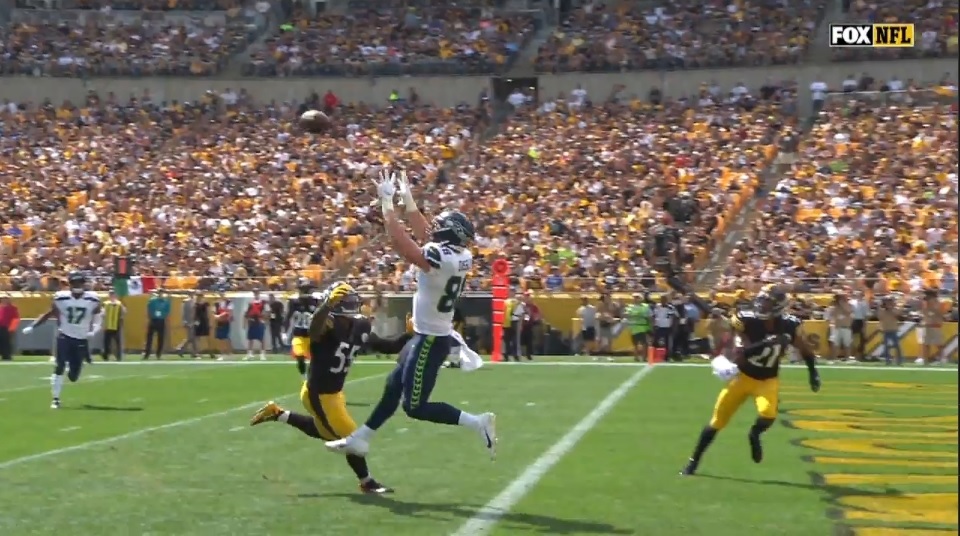 Two games into the 2019 season and a portion of the Pittsburgh Steelers fanbase is ready to panic. Wake up Pittsburgh! It’s showtime and the Black & Gold missed their first call. They cannot afford to miss two times in a row. Steelers lose the game. Ben Roethlisberger injured and out for the season. The Yinzers are out in force. Is it time to hit the panic button?

Some sad news, former Steelers great Sam Davis passed away in Pittsburgh this past Tuesday. Davis played for the Steelers from 1967-1979. He was one of the few Steelers players that Chuck Noll kept on the roster as they transformed from a doormat to a perennial powerhouse in the 1970’s. He was the starting left guard in the last NFL game he played. A 31-19 Steelers victory over the Los Angeles Rams and his 4th Super Bowl Ring. I ranked him # 53 on my list of top 500 All-Time Steelers last year.

The Steelers Forecast versus the Seattle Seahawks

Steelers Depot gives us specific things we should look for during the game. I always read these three articles prior to kickoff:

Matthew Marczi described what we should watch for in the game against the Seattle Seahawks. Most importantly, lets see if the receivers secure the ball especially Donte Moncrief. Then, let’s see if the Steelers establish the running game. Will they use multiple tight ends including Zach Banner as a tackle eligible receiver? Will there be more clarity at the inside linebacker position? Will Sean Davis return giving Kameron Kelly a chance to shine in some sub-packages? Finally, will Ryan Switzer break off a big kick or punt return?

Alex Kozora forecast what would happen in his Steelers versus Seahawks prediction.  The Steelers needed to shutdown the Seahawks run game, make a splashy special team return, & Ben Roethlisberger needed to take advantage of a young secondary. He predicted a loss if Seattle succeeded in play action, the corners don’t contest jump balls, & Vance McDonald didn’t have a big game. Alex optimistically called a Steelers 23-14 victory. Maybe if Moncrief caught the ball Seattle intercepted, he might have been close.

Dave Bryan identified the keys to a Steelers victory. First, the defense must shut down RB Chris Carson early in the game. On offense, Ben needs to target Vance McDonald “early and often.” Secondary must isolate rookie WR D.K. Metcalf. Meanwhile, James Conner runs between the tackles. Javon Hargrave & Cam Heyward exploiting their matchups could lead to sacks. Randy Fichtner and the offense must convert on 3rd and short while the defense must improve their communications. Accomplish these seven successfully and the Steelers should roll to a win.

You can compare these pregame guides to Kozora’s analysis of the game’s winners and losers which came out within minutes of the final whistle. How does his analysis compare with your view of the game?

Ben Roethlisberger was ineffective while he was in the game. I believe his elbow was bothering him before the game. His passes lacked zip. The first three drives ended with punts. The Steelers 22-yard scoring drive coming off a turnover was the result of Seattle penalties that cost them 21 yards. James Conner then capped it with a one-yard run. Vance McDonald was blocking on a screen pass before JuJu Smith-Schuster caught the ball resulting in offensive pass interference. It didn’t matter Shaquil Griffin tackled JuJu for no gain on the 3rd and 4 play. The field goal put the Steelers in the lead 10-7. Ben was spotted walking into the locker room with team Dr. James Bradley before the end of the half. Little did we know that would be the last time we would see him in uniform for the 2019 season. Yoi!

Donte Moncrief did not give any favors to Mason Rudolph. His long pass bounced off Moncrief’s hands and Bradley McDougald intercepted the gift ball. Moncrief would not play another offensive snap in the game. Rudolph led four more drives completing two touchdown passes to Vance McDonald and a field goal. He seems poised and confident. Time for the team to rally around the new starting quarterback for the Pittsburgh Steelers.

The Steelers defense appeared strong. Stephon Tuitt, T.J. Watt, and Mark Barron recorded sacks. Watt forced a fumble that Barron recovered leading to the Steelers first score. The Steelers held the Seahawks to a field goal on the 4th drive but referees flagged Dan McCullers for unnecessary roughness. Russell Wilson exploited the miscue by passing the ball over Devin Bush who was trailing some guy called Will Dissly. I had never heard of him, but he tied the game. The Seahawks missed a 58-yard field goal attempt to end the half. Overall, a good half of football played by the defense.

The defense forced a three and out to open the second half. Unfortunately, the Seahawks scored touchdowns on their next three drives. First was the drive following the interception that put the defense back on a short field. The Seahawks converted a 3rd & 10 followed by another Wilson to Dissly touchdown pass. The next drive was very frustrating. On 3rd & 2, Anthony Chickillo appeared to be in position to tackle Rashaad Penny in the backfield. But Penny juked by Chickillo and ran 37 yards for a touchdown with Russell Wilson leading him as a blocker. A Steeler defender should have leveled him.

The NFL’s new challenge rule aided Seattle’s third touchdown in the half. Pete Carroll threw the red flag to dispute that the play that had been ruled an incomplete pass. Officials in New York City then decided that Terrell Edmunds had committed defensive pass interference. Instead of 3rd and 20 from Seattle’s 27-yard line, the referees rewarded the Seahawks with a first down deep in Pittsburgh’s territory. A 38-yard gift from Roger Goodell’s squad of striped flying monkeys. Personally, if the officials on the field no longer can decide on pass interference then limit defensive pass penalties to 15 yards. Devin Bush did recover the ball from a bad snap which put Pittsburgh back into the game.

Unfortunately, the defense could not stop Seattle from consuming the last 5 minutes & 34 seconds. I wanted to see if Mason Rudolph could get the ball back to lead a 4th quarter comeback victory. The play that ruined that chance was not containing Wilson on 3rd & 16 with a five-man rush.

Chris Boswell and Jordan Berry had good games. Berry showed good dexterity in catching a high snap allowing Boswell to convert the kick. The penalty on McCullers on the field goal block unit cost four points. Ryan Switzer muffed a punt but recovered the ball. I was happy that Mike Tomlin replaced him with Diontae Johnson who returned one punt 11 yards. It’s time for a change.

Steelers fans are looking for changes in the roster and coaching staff. Nelsonator762 reacted after the missed tackle in the backfield, “I’m sick of seeing Anthony Chickillo on the field.” Unfortunately, Chickillo was hurt, so injury may indeed lead to a change.

VaSteeler had concerns about the offense: “This offense is offensive No innovation! Everything from the shotgun!! Get back under center Play smash mouth! Utilize play action! The wr’s aren’t getting separation anyway So why not try a flew flicker Anything to switch things up Please Bill Cowher come back!”

Cormel Bovan Sr. singled out the problem with the offense, “That’s the problem, Ben is basically the offensive coordinator.” Of course, we did not know about his elbow at the time. It may have been bothering him for some time.

1318 comments in the 2nd half. Well above the standard. Someone pointed out that when Steelers fans have nothing to complain about, they just sit and pout silently. Not this past Sunday.

Buccos9 led the chorus of complaints, “Now we know why the Steelers risked losing Tuzar Skipper. Chickillo is indispensable.” The Intense Camel was not far behind: “Oh look, chick getting juked out of his shoes. I’m sure he’ll make up for it on STs though.”

Chad Weiss added some optimism with “Nelson turning into great signing.” I was still thinking about earlier in the game: “Those 4 points caused by McCullers penalty are looming large.”

Amp4380 targeted a change he wants with the staff. “Butler has to go. Enough already. This team has spent 1st round pick after 1st round pick on defense, and when the game is on the line, they are incapable getting a stop. It is infuriating.”

Can the Steelers still win the division?

I set the alarm for 12:30AM to follow the game Monday morning Philippine time. Is it time to panic? I believe it is too early to give up on this season. Young Mason Rudolph shows promise. Maybe he can match Ben’s rookie regular season. In the meantime, Pittsburgh is making some moves. Trading a first round draft choice is out of character for the Steelers, but they made the move to acquire Minkah Fitzpatrick. Timely since Sean Davis is reported to have torn his labrum. I am sure more moves are coming this week including deciding who will be Rudolph’s back-up.

I always like to offer a music selection. As requested, one of my favorites by the Boss. Here is Rosalita by  Bruce Springsteen & the E Street Band.