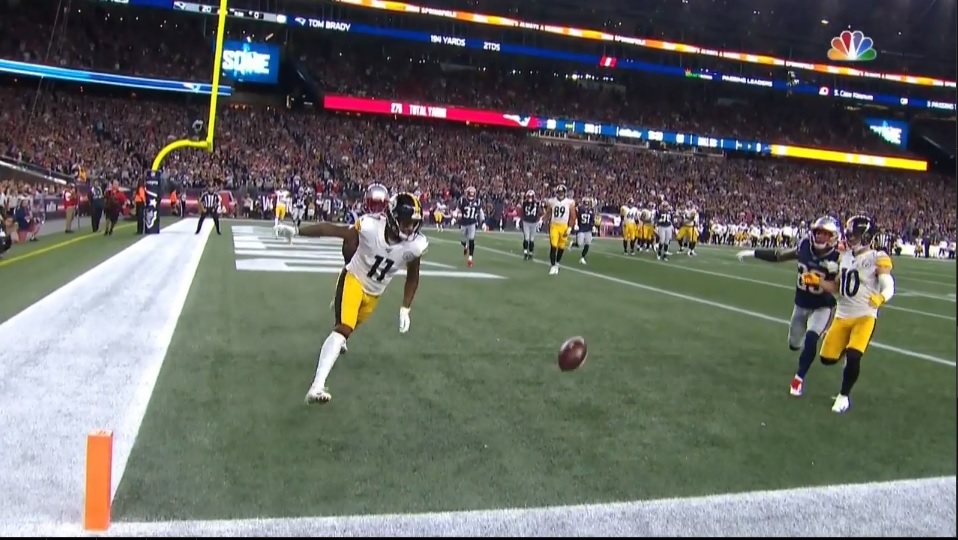 The news from Pittsburgh was quiet leading up to Sunday night’s game versus the New England Patriots. The Steelers announced their team captains for this season. Speculation of which players may or may not get playing time. It was all overshadowed by the ongoing saga of Antonio Brown. His sudden departure from the Oakland Raiders and then surprise signing, by who else, but the Patriots. Instantly, Steelers Nation banter went from chortling about the good fortune of having AB out of the picture; to the sudden realization he had landed on the Death Star. Yoi.

I was in Manila and met up with two other yinzers. The time difference meant that we could not watch the game live since we were working. A fortunate event considering what transpired on the field. We could only follow the occasional tweet or text message. A few glimmers of hope when we heard Pittsburgh had the ball and it was first and goal. But mostly unwelcome news emanating out of the Evil Empire.

Matthew Marczi described what we should watch for in the game against the Patriots. Matt asked, how would the young players handle the environment? He also noted that communications of defense would be critical. It seems Tom Brady did pass the ball by Kam Kelly & Terrell Edmunds a couple times. On offense, would a community effort lead by Donte Moncrief & James Washington help make-up for the loss of AB. It does not appear so.

Tom Mead identified the matchup to watch . This week, his focus was on Bill Belichick vs the Steelers Biggest Threat. Tom identified some scenarios that Pittsburgh could do if the Patriots took JuJu smith-Schuster out of the game. Unfortunately, the Steelers coordinators appeared to have just dusted off the game plan from their last game against the Pats. With Belichick coaching, that was a recipe for disaster. He cooked it, now Pittsburgh must eat it up.

What can I say for an offense that was 3 for 12 on 3rd down conversion attempts, had three drives that were 3 plays and a punt and could not score a touchdown from first and goal? More anemic statistics. The Steelers rushed for 32 yards on 13 running attempts. That’s 2.46 yards per carry. The Patriots shut out the Steelers offense until the 3rd quarter.

I saw a replay of the 45-yard pass to James Washington. It was a brief glimpse of what could be. But one big play a game is simply not going to lead to many victories. More worrisome for a long season is Maurkice Pouncey losing playing time to an injury. JuJu Smith-Schuster also has a toe or ankle injury.

The defense had no turnovers. Tom Brady was not sacked until well into the 2nd half after the game was out of practical reach. Brady exposed the secondary splitting Edmunds & Kelly. The defense did force a punt on New England’s opening drive. But you can hardly give the defense a passing grade when the opponent scores on 7 of their 10 drives. Now we must see if T.J. Watt’s hip injury will cause him to miss games. Joe Haden had a shoulder injury but finished the game.

Chris Boswell converted his only field goal attempt, a 19-yard chip shot. Jordan Berry punted the ball 5 times for a 45.6 per punt average. However, New England returned one punt 20 yards and another 15 yards. He either outkicked his coverage or there was a breakdown. Not good. Danny Smith, please fix this.

“Very disappointed in Moncrief so far. Three negative plays already in one half of football.” That was the top comment from AMP4380. T-51b replied, “Another cheap free agent signing. You get what you pay for.” Leading RASTA observe the obvious: “Yes…so stop throwing him the ball! Actually, just stop putting him in the game please….”

The commentary did not get much rosier. Mr. KnowItAll got a lot of acknowledgement with, “Holton got pushed in the back lol smh…”  It was no better on defense. HdMartinez ordered, “GET BUD (Dupree) OFF THE FIELD… I DONT CARE HOW MUCH THEY PAY HIM HE ISNT GETTING ANY PRESSURE” It’s the first half and Kenneth Ferderer can already see that “Tomlin looks lost…”

Oh boy. Let’s see if the second half comments were any less salty.

1482 comments in the 2nd half.  Someone pointed out that when Steelers fans have nothing to complain about, they just sit and pout silently. Not so in this game. There were plenty of complaints with sound reasons. The Steelers laid a big egg.

One of the mantras for this season was for the team to “shut out the noise.” That does not apply to the fans as Nelsonator762 expressed in his top-rated comment: “Brown living in Brady’s house until he gets settled in? Yep no tampering or collusion here everyone looks away like good little sheeple”

AMP4380 was looking for solutions. “Washington needs to be the primary #2 at this point. Moncrief is playing terrible, and I was actually excited about his potential when he was signed.”

Strength of Victory summarized the game:

“1. The Steelers have one of the best O-lines in football, but they can’t run the ball—not even in short yardage. They also can’t keep pressure out of Ben’s face.
2. The Steelers led the league in sacks the past two years, yet they can’t sack Brady until the end of the 3rd quarter.
3. The Steelers dropped more passes tonight than Jay-Z has dropped beats.

I haven’t been this embarrassed during a Steelers game since the 2016 AFC Championship Game against the Pats. That game felt over early in the 3rd quarter. Tonight’s game? It felt over by halftime.

I hope this team feels as humiliated. They should. They’re the laughingstock of the entire league.”

Alevin16 was more succinct: “The loser list is going to be longer than War and Peace”

OK, this game tested our nerve. Looking forward to everyone’s comments next week. Hopefully, there will be more to cheer about.

This was just the first of 16 games, so as an average Steelers fan, I’m not ready to switch to Pittsburgh Penguins hockey just yet. But the Steelers need to lick their wounds and get ready to tussle with the Seattle Seahawks next week. They eked out a 21-20 win over the Cincinnati Bengals but don’t be fooled. Seattle is tough and they will want to lay the wood on another AFC North team.

Mike Tomlin, Randy Fichtner and Keith Butler must come up with a better game plan or Pete Carroll will be flying back to the west coast with a smile on his face. The Steelers players will have to dig deep. The Patriots just showed them the way a champion plays this game. No quarter. Keep scoring until the other team stops you and shut down the strength of the offense.

Who is going to be an All Star and get their game on next week?

I always like to offer a music selection. Here is All Star by the Smash Mouth.