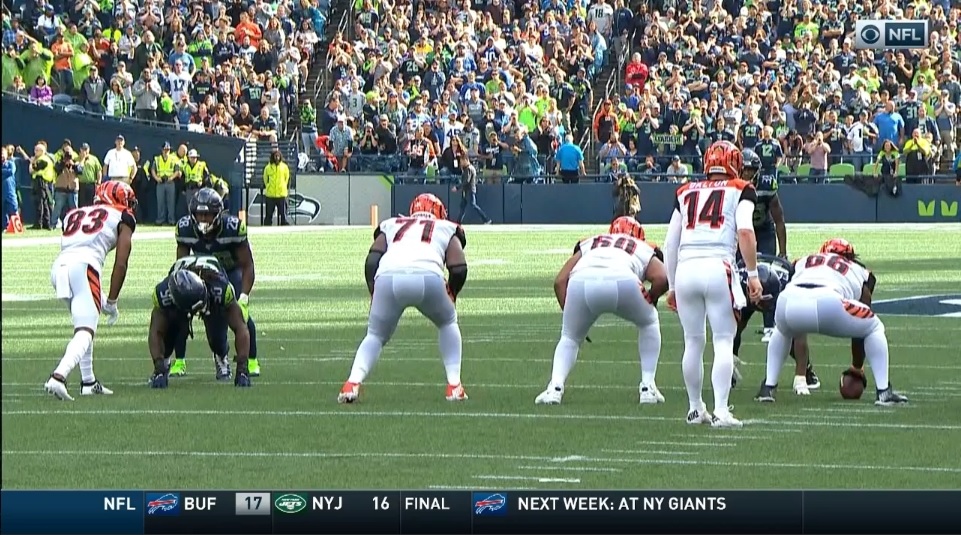 Throughout the Pittsburgh Steelers season I will be doing a weekly piece on an intriguing matchup to watch for each game. The focus will be on choosing important battle for the upcoming  game and give you some background information that could be something keep an eye on come game time.  For example, it could focus on key players on each team that will be going head to head or how a defense will try to stop a specific player.

The Seattle Seahawks roll into Pittsburgh this week coming off a 1 point home victory against the Cincinnati Bengals. They are a run first offense lead by dynamic signal caller Russell Wilson. They are a stout defense with a four man front with some big names including Bobby Wagner, Ziggy Ansah and newly acquired Jadeveon Clowney. They also have a former Steeler in the mix with Al Woods playing defensive tackle. He’s a ten year veteran who was with Pittsburgh in 2012 – 2013. After watching the Seahawk/Bengal game there was something I wanted to pinpoint to show you for this weeks matchup.

After trading DE Frank Clark to the Kansas City Chiefs in April, Seattle was looking to add to t heir defense.  Less than two weeks ago the Seahawks made a splashy preseason move to trade with the HoustonTexans to acquire the three time Pro Bowler and former All-Pro defender. He came to Seattle with 29 career sacks, 205 tackles, 64 tackles for a loss and 67 quarterback hits in 5 seasons.

Defensively things will be a little different as he played in a 3 man front in Houston where he was also used to drop into coverage. Seattle runs a 4 man front and the early indication is Clowney will play primarily with his hand in the dirt.

Against Cincinnati, he didn’t start which is understandable after only being with the team for a week before his first game.  He played with the second unit as the strong side defensive end and was also brought in on passing downs.

The thing that stood out watching Clowney was his quickness and lateral agility to the inside.  He was able to put stress on the offensive lineman and get penetration by bursting into the B gap versus the run and the pass.

Here Clowney (90) is lined up in the wide nine technique on the left side of the screen. He going to take two steps vertically, plants his right foot and uses a club/swim to the inside. The tackle Andre Smith (71) is forced to reach out and hook his waist before getting to the QB.

This time he’s on the right side of the screen.  He’s going to use three steps, plant the outside foot then swipe at the hands of Bobby Hart (68) and swim over. Again it looks like the tackle hooks him around the waist.

Here is a play against the run. He’s lined up over the TE on the right. The two DE’s are going to move to their right putting Clowney in the B gap. He’s able to get inside Hart to make the tackle.

There is clearly a comfort going to the inside and it was where he was most effective.  Quickness is where he wins.  He’s not bendy so the outside rush is less effective. He can get upfield quickly but without the bend it make it easier to push him up the arc.  He tried some power rushes and those were ineffective as well. He had a sack in the game but that was after getting stopped at the line of scrimmage and chased the QB to the sideline.

Here is an early game rush from the right side. It looks like a speed to bull and while he does get some initial push, Hart is able to anchor and hold him off.

Next is a similar rush from the other side with similar results. He looks to try to gain the edge but his hands are wide and his inside hand slips off leaving him unable to move the tackle.

Here is the play where he got the sack. With Clowney not being successful with the outside rush during the game the LT seems to have made minor adjustments. He doesn’t get as much depth or width as he was earlier in the game and is able to take away the inside rush and hold him off despite the poor technique.

Tackles will be Tested

Alejandro Villanueva and Matt Feiler will likely both get their opportunities to face Clowney on Sunday and while it is probable Clowney will make adjustments as well the tape is pretty telling. He was not able to put pressure on the QB from the outside and that was against two tackles that are average NFL tackles at best.

With Clowney playing to the strong side of the formation if there is tight end on the field or not the tackles should be able to concentrate on the inside moves and adjust to the outside. Cincinnati did occasionally use chips from the TE to slow down Clowney but until he wins to the outside I don’t think that will be necessary.

The tackles will need to be aware of everything with the athletic defensive end but taking away what he does best should be a main focus.