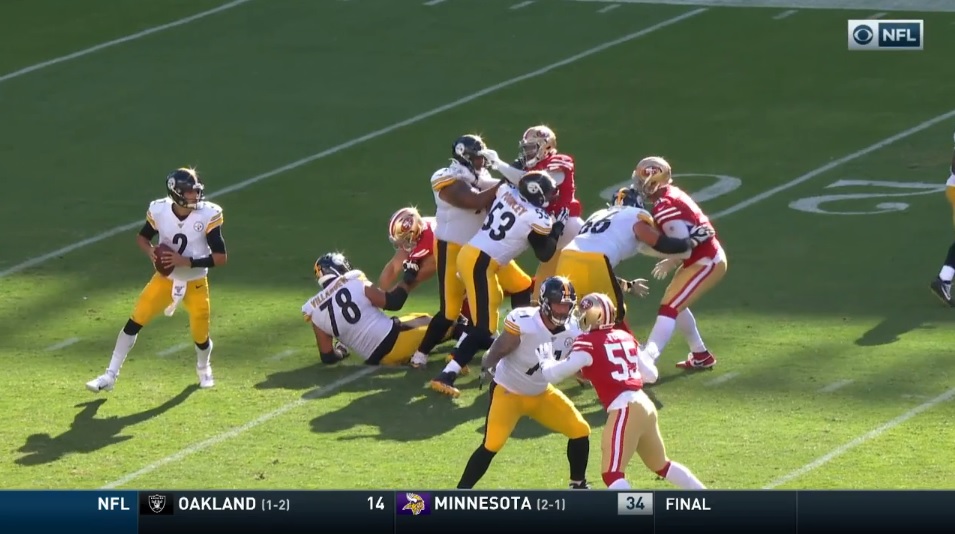 I’m stealing this joke from a Twitter follower because it’s too good not to pass on.

Call Mason Rudolph “the microwave.” Because he knows how to warm up. That’s how Mike Tomlin assessed Rudolph’s first career start, one that ultimately ended in a 24-20 loss.

“So, looking at Mason’s performance, I thought he warmed up as the game went on,” Tomlin told the media. “I think that it’s reasonable to expect him to be upward and onward from there. The quality of performance wasn’t always what we wanted or what he wanted, but I did really like his demeanor, his communication, his awareness in the midst of all of that.”

Rudolph finished the day 14/27 for 174 yards, two touchdowns, and an interception. Both scores were of the big-play variety, a 76 yard run-and-catch to JuJu Smith-Schuster and 39 yard bomb to Diontae Johnson. But for the first half of the game, his numbers were as ugly as ugly gets.

To his credit, he was tough, competitive, and under pressure far too often against San Francisco’s front. Teammates showed confidence in him before and after the game, echoing Tomlin’s sentiment of seeing a leader, good communicator and someone who didn’t quit at the end.

While Rudolph needs to play much better moving forward, the bottom line is that he put his team in position to win late in the game. A late James Conner fumble turned the tide for good and the offense didn’t get the ball back until there was just over a minute remaining.

His first home start will be under the bright Monday night lights, playing AFC North football against the Cincinnati Bengals. For whatever it’s worth, history is on his and the Steelers’ side. Under Tomlin, Pittsburgh is 14-2 on Monday night and have won their last seven straight games (though their last loss was to Cincy in 2013).

Context is also important. While it’s easy to make snap judgments on Rudolph after just one game, or even after this week, the team still has the majority of the season to evaluate him. There’s no final conclusions that need to be made anytime soon and seeing progression and improvement is the most important thing to watch from him.