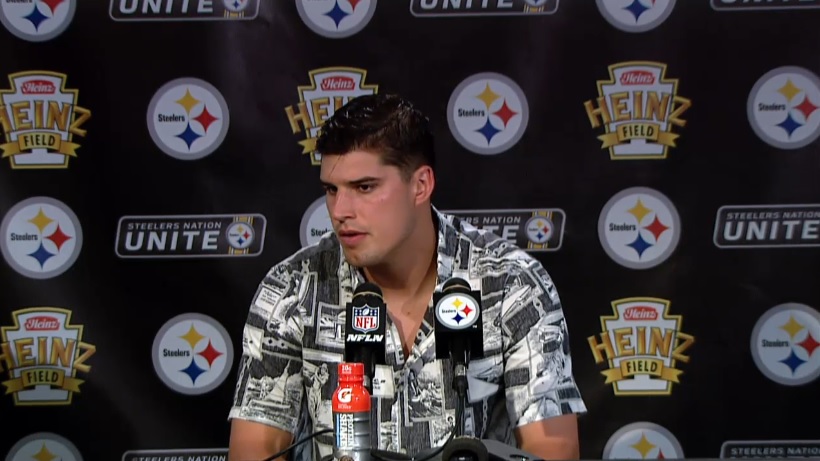 No one knows if Ben Roethlisberger will be available to play next Sunday. Not even Mason Rudolph.

The one thing Rudolph does know? If his number is called, he’s ready to take the wheel.

“We have no idea moving forward [of Ben’s status] but I’m completely confident, always been confident in myself,” Rudolph told reporters after the game. “Being the leader of a team and winning games and that’s what it all comes down to. So if that’s the case, I’ll be ready to roll.”

Rudolph played well in his NFL debut, finishing the day 12/19 for 112 yards and two touchdowns, both to Vance McDonald. On the box score, the one interception was a blemish but of no fault of his own, a well-thrown ball that went through Donte Moncrief’s hands and intercepted by safety Bradley McDougald.

Rudolph’s first NFL completion came via a flea flicker, a 45 yard play to JuJu Smith-Schuster down the right side. Asked about that play, Rudolph admitted he personally hadn’t run it before in practice. He added the throw was a bit underthrown and had it been on the money, probably would’ve resulted in a touchdown. Instead, the Steelers had to settle for a field goal.

“There was some ball placement things I could improve on,” he said of the things he wants to work on. “That last drive, just didn’t give our guys enough of a chance on the sideline.”

Still, he was a bright spot on an otherwise ugly game where the Steelers began the year 0-2 for only the fifth time since 1989 and only the second time under Mike Tomlin. They’ve quickly dug themselves a deep hole and will have to fight the history that comes along with that, not many teams who begin 0-2 make the playoffs, and their personal West Coast demons as they travel out west to San Francisco next Sunday.