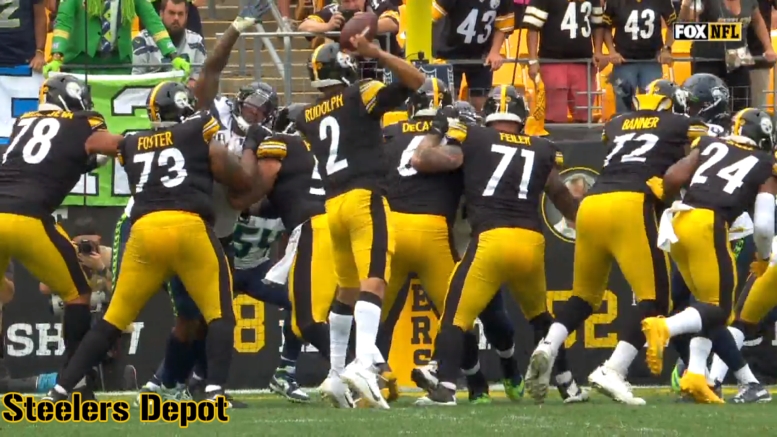 The Pittsburgh Steelers, however, were in that very circumstance yesterday after Ben Roethlisberger left the game at halftime with an elbow injury. Second-year quarterback Mason Rudolph, who dressed for the first time in his NFL career last Sunday as the direct backup, against the Seattle Seahawks made his official on-field debut.

Truth be told, he did acquit himself well. He looked the part. After throwing incompletions on his first three throws, one of which was a drop that led to an interception and another of which was a busted screen due to pressure, he connected on something like nine consecutive passes after that.

He ultimately finished going 12-for-19 for 112 yards and two touchdowns to the one interception that should not be his responsibility. Most importantly, however, he looked confident and comfortable running the offense, and everybody seemed to be working with him well.

He was asked about that after the game, specifically as to whether or not he had earned the respect of his teammates. “I think I’ve earned the respect of those guys”, he said. “Every day I’ve been here I’ve tried to. That kind of gets developed in practice more than just getting thrown in. They know the player I am. I wasn’t trying to do anything fancy or special. I was just trying to be who I am and communicate clearly”.

Rudolph has never been anything other than who he is since the pre-draft process. He has always carried himself with the same demeanor, the same poise, the same confidence. He knows that experience and patience has helped him improve, but he’s always believed in his ability to play at this level, and of his being deserving of respect, which he has earned.

This offseason, he unseated Joshua Dobbs as the backup quarterback, whom the Steelers traded last week in exchange for a fifth-round pick. If the team wasn’t confident that Rudolph was the answer as the number two quarterback, or that Dobbs was close, they probably don’t make that move.

Now that they have gotten a taste of Rudolph, however, the question is how much more we’ll have to see him. That depends upon the severity of Roethlisberger’s elbow injury and whether or not that will cause him to miss time. Reports indicate there is some fear that it could put him on the bench, which is never what you want, but especially when you’re already a couple games into the season and still searching for your first win.