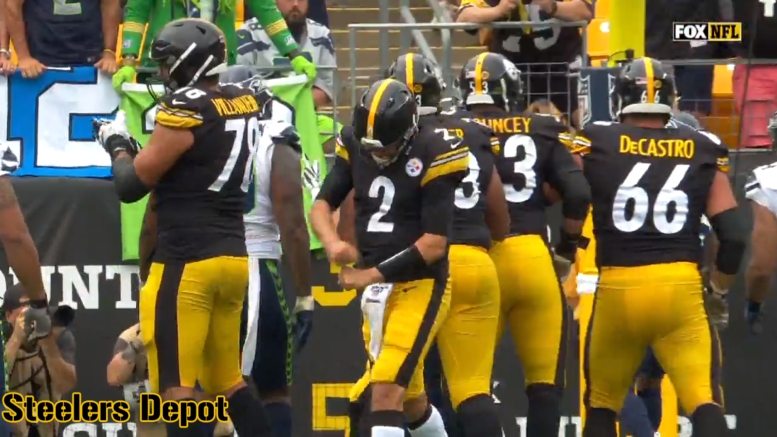 For the second time in six games, the Pittsburgh Steelers had to enter the second half of a game without Ben Roethlisberger. Last year, back in Week 14, it was Joshua Dobbs coming in, and he could not lead the offense, which allowed the Oakland Raiders to come back.

This afternoon, with Dobbs first demoted to third-string and then traded to the Jacksonville Jaguars, it was second-year Mason Rudolph, who came in and helped to keep the Steelers alive, throwing a pair of touchdown passes in the fourth quarter to Vance McDonald, including one a capper on a 75-yard drive.

The Steelers drafted Rudolph in the third round last year not because they needed a quarterback on their depth chart—they already had Landry Jones and Dobbs, and it was assumed initially that Dobbs would be the odd man out—but because they saw in him long-term potential, and he was a player they had a first-round grade on available in the third round.

Unfortunately, they got a chance to get a glimpse of that potential this afternoon. After failing to connect on his first three passes—including an ugly drop by Donte Moncrief that led to an interception that was not the quarterback’s fault, occurring on third and eight—he finished the game completing 12 of 19 passes for 112 yards and two touchdowns, not a bad NFL debut at all.

He played the entirety of the second half, and he not only looked comfortable and prepared, he said that he felt as much as well. With Roethlisberger getting Wednesdays off, Rudolph is still getting used to having those extra reps as the number two quarterback.

“I had a lot of reps this week, and I didn’t feel like I was unprepared by any means”, he told reporters after the game. On coming in after the half rather than immediately after a play, he said, “it happened the way it did. Obviously whenever you get the chance to sit down with Randy and the offensive line and receivers”, it helps, but it wouldn’t have mattered even if he had just a play’s notice.

“We didn’t really change the gameplan at all. We kept running” the same offense, he said. “It’s just a matter of, ‘hey, what do you like on third downs’, ‘what do you like on first and 10’, ‘what are your favorite passes and runs’. So, when you have a chance to kind of talk through that, yeah, it does help. But it wouldn’t have mattered if it would’ve been in the middle of a play in the first half”.

For the moment, there is no clarity as to the severity of the elbow injury Roethlisberger suffered in the first half, and thus no understanding of whether or not he will be available next week, the week after that, or the week after, and so on and so forth. But in any event, the second-year man is ready for the challenge.