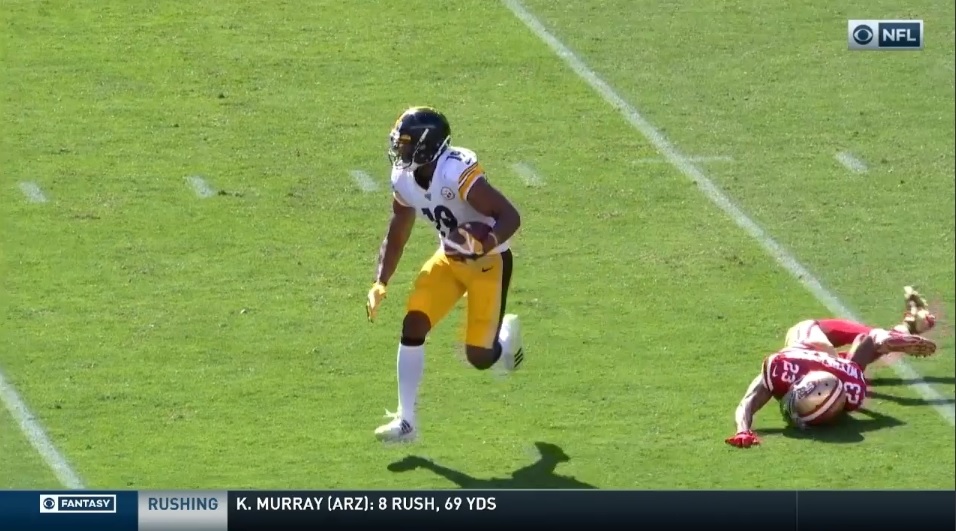 His 76 yard third quarter touchdown against the San Francisco 49ers was the 5th of his NFL career, giving him the most 75+ yard touchdowns – of any variety – before the age of 23 in football history.

He broke a four way tie with: Patrick Peterson, Gale Sayers, and Tamarick Vanover. Not bad company to keep. And if you’re wondering, like I was, Vanover was a return specialist for the Kansas City Chiefs in the mid to late 1990s.

Despite not being blessed with outrageous straight-line speed, Smith-Schuster ran the 40s in the 4.5 range, he’s shown a remarkable ability to make the big play and flash speed in the open field. That was on display against the 49ers, running away from the corner covering him before tearing down the left sideline the rest of the way.

Here are the other four in his career.

The first of the five. Long run and catch by JuJu but a well thrown ball by Ben Roethlisberger, exploiting the middle of the field. He flashed his speed outrunning three Lions’ DBs to the end zone.

Arguably the most forgettable of the list. The last kick return touchdown by a Pittsburgh Steeler and their only one since 2011. Week 17 against the Browns, breaking a 21-21 tie in an eventual black and gold win.

A quick answer after the Panthers took a brief 7-0 lead. It was all Steelers from there, a well-executed pump fake by Roethlisberger to open JuJu down the left seam. He took it from there.

Another 97 yard touchdown catch. Beat the corner, ran away from the safety, and got a good block from he-who-shall-not-be-named.

If you’re wondering about all-time records in a career, his five scores have him tied for 40th in league history. The record is held by Devin Hester’s 13 followed by Bobby Mitchell with 12 and Dante Hall/Ollie Matson with two. Smith-Schuster is one shy of the Steelers’ record, currently held by Louis Lipps’ six of them.