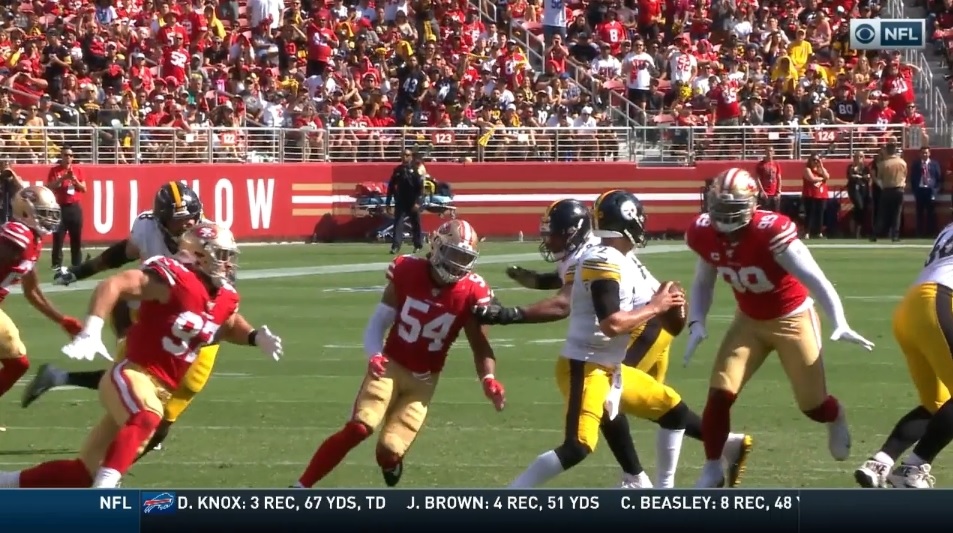 25% isn’t a good number for anything. Not for how much gas is left in your tank, not for that grade you got on your Meteorology test junior year (yes, a real thing that happened to me), and definitely not for your third down offense. Yet that’s where this Pittsburgh Steelers’ offense stands after three games, a historically poor number.

For Sunday at least, why was it was so bad? The offense finished just 3/12, and it honestly felt worse than that. It’s the central part why this offense is failing and multiple players, from Mason Rudolph to David DeCastro, pointed out the obvious and how much they’ve struggled.

So we’re going to break down those failures into two categories. Blame goes around to everyone when a unit is this inept, but we’re going to separate the overall plays into scheme (i.e. Randy Fichtner) and player issues. Cover your eyes, grab a stiff drink, and let’s take a look.

First came on 3rd and 7 late in the first quarter. 3×1, stack left. Helps create a free release for all three receivers. What I don’t love here is how largely only one side of the field is being utilized. All three receivers to the left half of the field. JuJu Smith-Schuster’s over route eventually carries him across but that takes time Mason Rudolph ultimately doesn’t have.

The other element? You feel the pain of not having Antonio Brown for defenses to worry about. The 49ers have no problem isolating Richard Sherman one on one with Diontae Johnson at the top of the screen. The safety, while not truly doubling JuJu, is able to roll to the field and ends up bracketing him, nullifying the matchup on the linebacker. 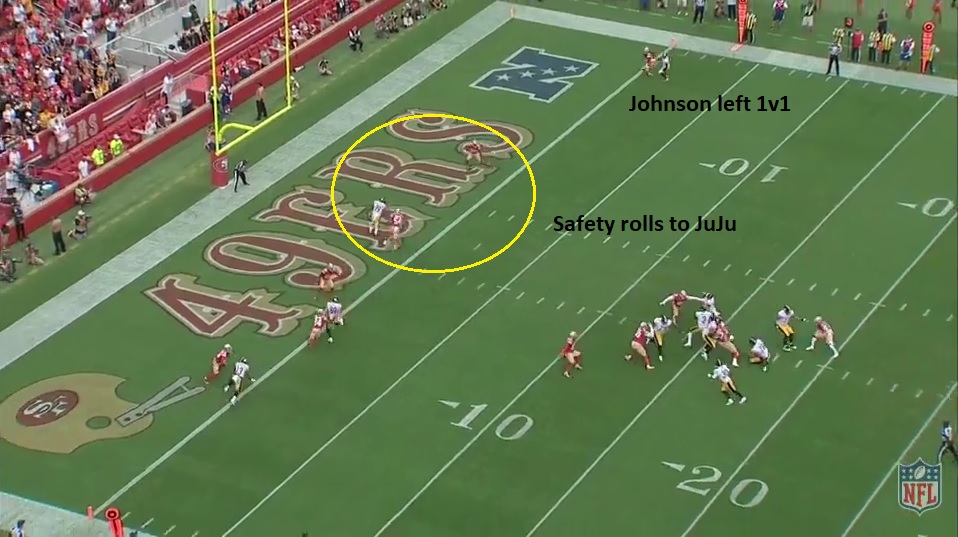 No one is open and Rudolph is forced to scramble for a one yard gain, the offense settling for a short field goal.

This next one, a 3rd and 10, is a great example of what I mean when I say Fichtner is setting too many route concepts up as independent another. I get it’s 3rd and long, and your already limited playbook with a young QB is limited all the more. But every route is independent, counting on someone winning their matchup. No defender in conflict, just covering their man and taking everything away. All three routes are vertical, no leverage is used, and there’s no horizontal concept.

This is what Rudolph has to deal with standing in his end zone. And when you’re facing 2 Man, like the 49ers are running here, you’re dead in the water. 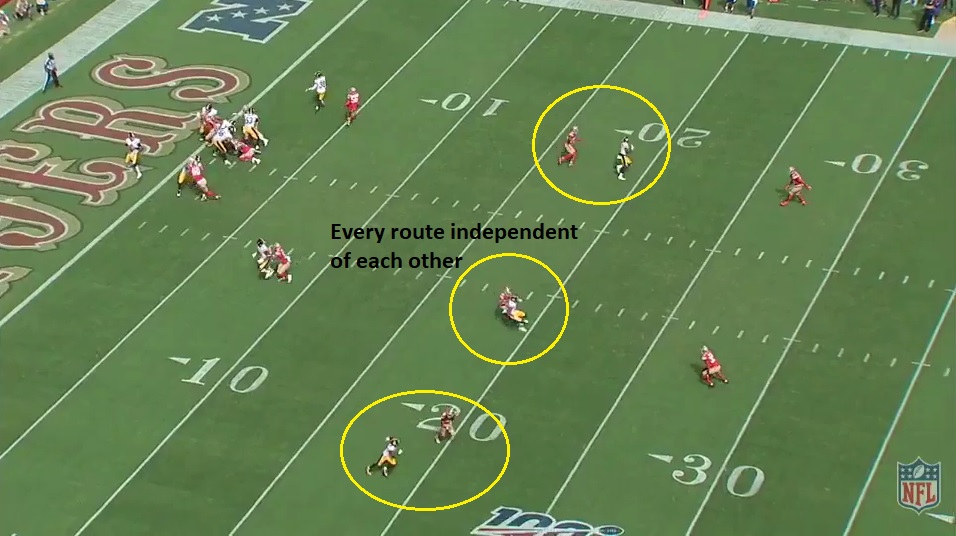 Again, it’s another scramble, another failed conversion and the Steelers punt. The 49ers get the ball back on Pittsburgh’s 49 and wind up with a field goal.

3rd and 7 on this play. This looks like the Steelers trying to run their fake bubble screen to hit the seam, specifically to JuJu Smith-Schuster, at the top of the screen. It’s a play that works for this offense, JuJu caught a 26 yard pass on it in Week 1 vs New England, but it’s the timing of the playcall that’s poor.

On 1st and 10? Sure, this has a chance. That’s when defenses are expecting the bubble screen and are more likely to bite. But this? This is 3rd and 7. Defense isn’t going to bite. Let them throw the screen. Defense will tackle the catch. And that’s what they do. Good effort by Washington but he winds up a yard short, and the Steelers punt.

I don’t mean to pick on Diontae Johnson here because hey, he caught one of the two touchdowns (and converted a 3rd and 7), but two rough plays on third down. First one came on the first drive. In cut and he’s gotta drive through the route. Stops up, avoiding contact from the linebacker in the next window, and the throw clangs off his hand. Gotta be willing to take a shot here to convert. Incomplete. Punt.

And again here on this 3rd and 5. Speed out by Johnson at the bottom. Stack creates off coverage, this should be an easy conversion. But Johnson breaks down on his cut and the pass lands out in front and incomplete. Again, he’s gotta run through the route, not slow up in the middle of it. That’s how accurate passes wind up looking off-target and on the ground.

Do want to highlight a rare positive moment on third down. The 76 yard touchdown to Smith-Schuster on 3rd and 4. Nice levels concept to work all levels of the field with horizontal concepts.

James Washington runs a shallow cross. Smith-Schuster runs an over route while Johnson runs a 15 yard dig. This uses leverage (defenders shaded outside not trying to defend inside-breaking concepts) and works all areas to create space and the ability to beat man or zone coverage.

Good throw and run after by JuJu for the score. That’s giving your players a fighting chance to make a play.

It’s cliche to say the blame falls everywhere but when the third down offense has struggled as much as it has, it can’t fall just on one coach or player.

Fichtner has to be more creative schematically and there’s limitless possibilities to get receivers open. Rudolph being a young QB is not an excuse. Look around the league at offenses being led, and thriving, by young QBs. Daniel Jones just gave the Giants’ O the spark they needed last week.

But Rudolph and players have to execute too. No longer can Fichtner just expect these guys to line up and win. Not now, anyway.