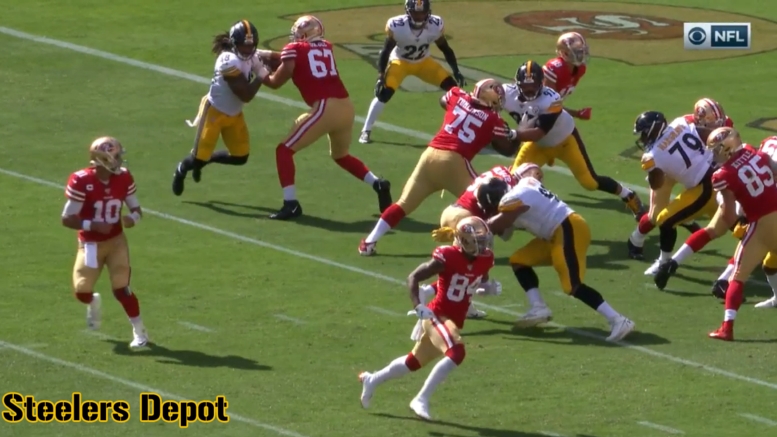 In spite of all the negativity surrounding the Pittsburgh Steelers so far this year, veteran defensive end Stephon Tuitt is off to the best start of his career. While he already has three and a half sacks on the season, he has also been an impactful player against the run, which is what I will be looking at below.

Tuitt’s first run stop came in the second quarter on first down. His ability to walk with the center laterally across the line of scrimmage and flow to the ball allowed him to cleanly come off the block and make the tackle on Matt Breida following a gain of just four yards—a ‘successful’ play for the defense, relative to down and distance.

This isn’t exactly a significant one, but it does technically count as a run stop. On the final play of the first half, on second and 15, Tuitt was awarded as the primary tackler on a five-yard run, another successful play for the defense. Here, he was double teamed, and while he largely maintained his ground, he was able to slit the double team as the play came his way and make the tackle.

Early in the third quarter, he worked as a five-technique against the right tackle and made quick work of him, tossing him aside in order to get into the backfield, making the tackle on the running back for a gain of just two yards on first down.

A short time later, he made two plays in a row on goal-to-go plays, the first a run stop for no gain against the 49ers, goal-line back, and then, a play later, making the tackle on a shovel pass on the fullback for two yards, setting up third and goal from the one.

Late in the fourth quarter, in a short-yardage situation, the 49ers needing one yard, it was Tuitt again making the stop. San Francisco tried to start off double-teaming him, but he was able to split it again and make the tackle, with the rest of the defense coming in and cleaning it up.