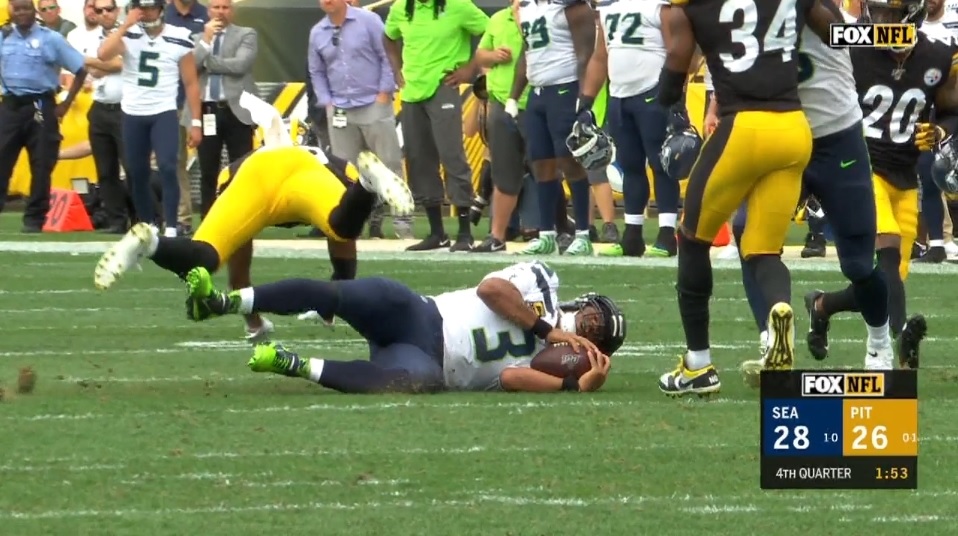 It’s 3rd and 16. Two minutes left, Seattle up by two. All the Pittsburgh Steelers have to do is get a stop, force a punt, and they have a shot for Mason Rudolph to lead them to a game-winning drive. How storybook would that be?

Except the offense never got that chance. Instead, Russell Wilson broke contain, ran for 15 yards before giving himself up with a slide, setting up a 4th and 1 the Seahawks converted. Three kneeldowns later, the game was over. Storybook closed.

So how on Earth did that happen? Mike Tomlin pointed out the obvious in his Tuesday presser.

“It was negligence on our part in some instances in terms of rushing hard and smart,” Tomlin said. “The significant one was the third and long. We had the opportunity to get the ball back. We rushed five people in an effort to keep him in the pocket. And he still found the means to escape. Obviously, we take responsibility for that.”

To be clear, the 3rd and 16 run wasn’t the only such play the Steelers gave up on that drive. In fact, it happened three times at the end, though the second one was called back due to a hold. So we’ll skip that one knowing the penalty had some impact. The first came on 2nd and 9 with 3:24 to go.

It’s a four man rush. Sort of. Cam Heyward seems to be expecting a screen or quick throw in the left flat to the RB, #20 Rashaad Penny, and backs out of the rush. The left guard follows him, which I suppose gave Heyward all the more reason to believe it’s a screen. 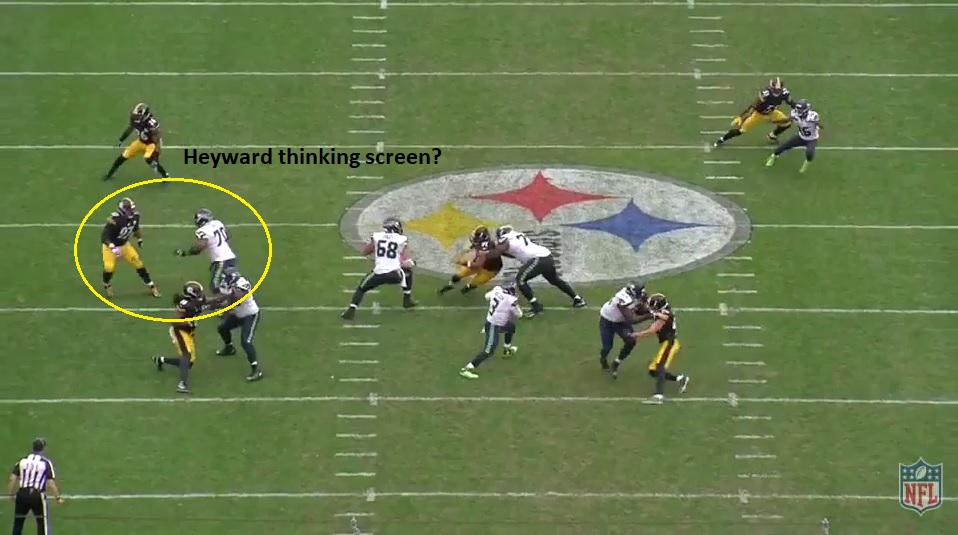 So instead of a four man rush, it’s a three man rush. And sure, the left guard follows Heyward so it’s basically four Seahawks’ linemen blocking. But the fewer players rushing, and even with fewer blockers, the more lanes open up. A hypothetical one-on-one rush gives the QB a lot of space.

So with just three coming, it’s impossible to contain all the gaps, and Wilson finds a lane up the middle. The route concept helps too. Perhaps that was intentional. Everything far away from the hashes, spreading the coverage out, and creating the run lane. 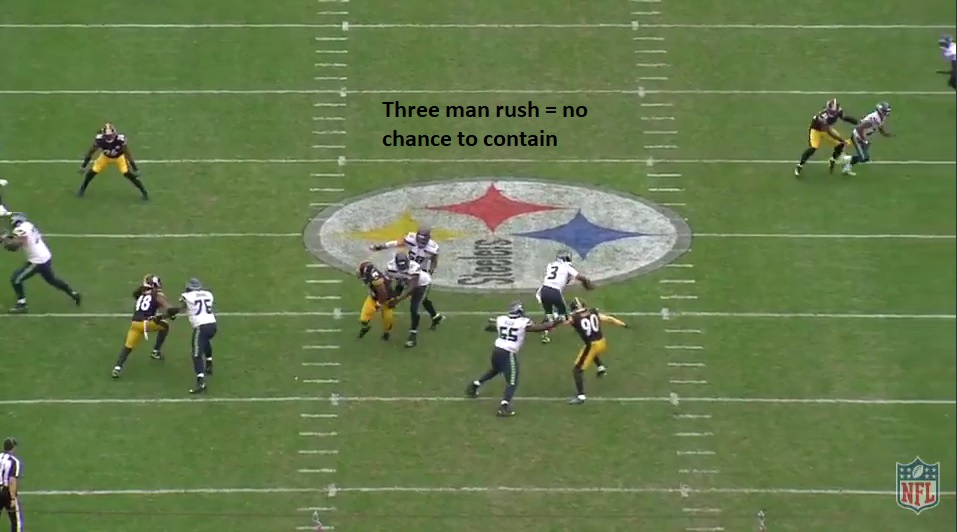 Check out the whole play. Even with Tuitt getting washed down, he’s in a no-win position. If he goes the other way, Wilson just ducks to his left. Lose-lose. And to be fair, even if it was a four man rush, that can be hard to contain too.

Ok, buckle up. Here’s the doozy. Wilson’s 3rd down scramble. The Steelers send a five man pressure. The theory being, if you send five, you should close up all escape lanes so long as everyone does their job. The only wrinkle here is a stunt between Mark Barron and Bud Dupree. Barron has outside contain with Dupree looping inside, a stunt that’s been effective before, both with Dupree and in this game. That’s how TJ Watt notched his first sack.

But to be clear. There is no specific “contain” player. All five men are rushing. And initially, things look pretty good. Like there’s nowhere for Wilson to run to. 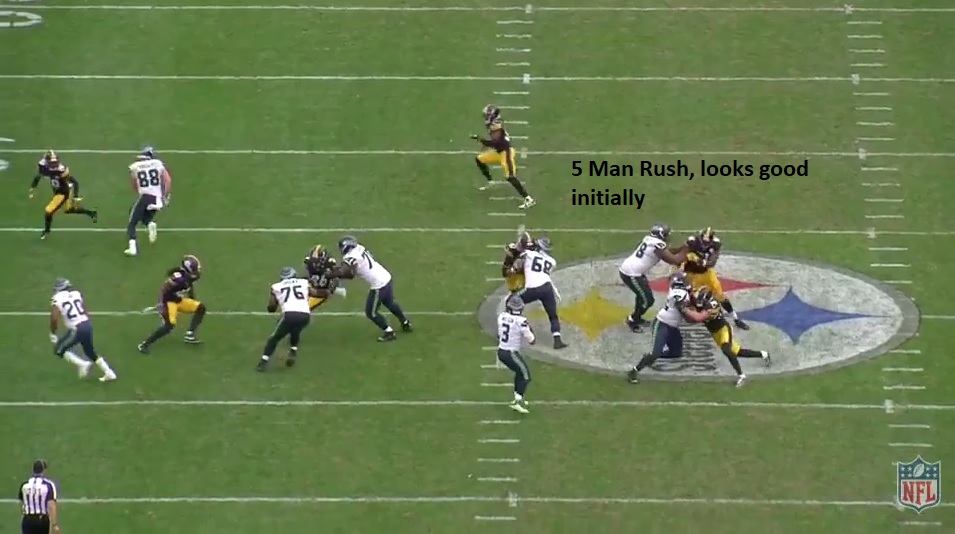 The issue? It’s weird to harp on him because he’s normally so steady for this team but I think it’s again Heyward providing the fatal flaw. He initially rushes center Justin Britt back but attempts to shed the block by swimming over to the offense’s left. The center pushes him down, using that natural leverage, and that creates a lane in the opposite A gap. Giving Wilson the escape hatch. 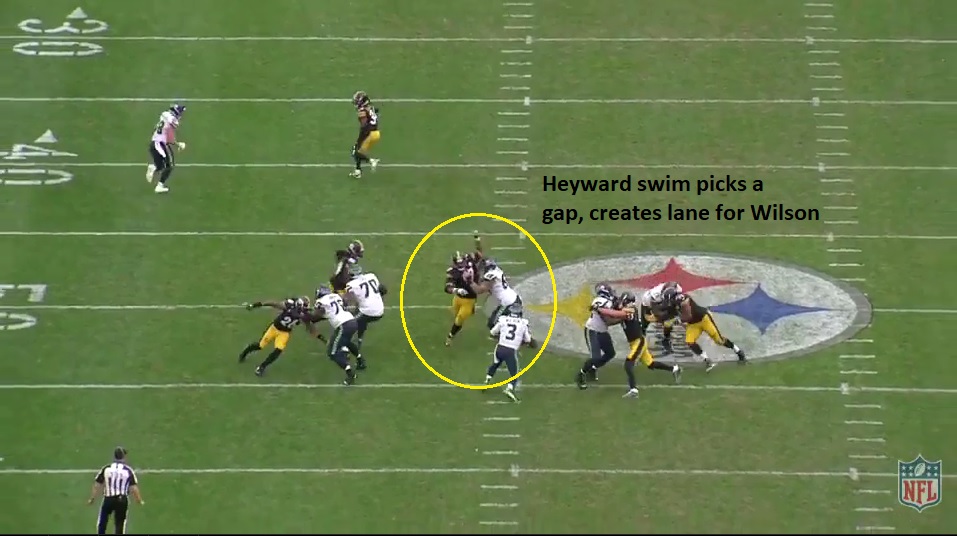 It’s easy to sit back and play armchair defensive coordinator but ideally, Heyward just walking the center back would’ve been best. It’s like run defense. One-gap schemes who want to penetrate can make big plays but if they miss, they open up a big lane. Two-gap schemes won’t get that penetration but can stack and shed when the runner makes his decision. Everyone else can hit their gap, the others don’t have two-way gos to win any way they can, but someone’s gotta just push the pocket and prevent a lane from opening up.

I think that’s what Tomlin meant by “rushing smart.”

Of course, the play didn’t end there. Wilson still went 15 yards after crossing the line of scrimmage. Dupree, now looping over (and I think he sorta broke off the stunt because he saw the guard not bite on Barron), has a chance to make the play. He’s gotta change directions and get around the left guard, I get that, but the dude’s gotta make the tackle. Critical moment of the game. Miss that tackle and Wilson has nothing but green in front of him.

Dupree may have not been the true and blue contain guy, like I said, they were all supposed to rush, but in that moment, it doesn’t matter. He’s there. Gotta make the play. Have to. And he didn’t. 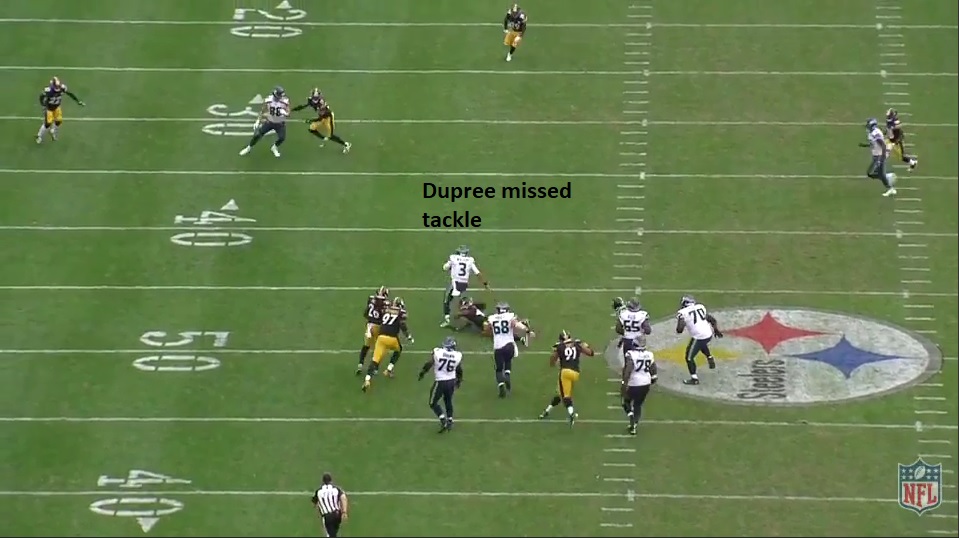 Last thing? I know the rules about hitting a quarterback and open field defenders always have to be careful but I wish Kameron Kelly would’ve come down harder here. Breaks down too early. If he flies in, maybe he makes Wilson slide a yard or too early. That normally means little but the difference between 4th and 1 and 4th and 3 is night and day.

On 4th and 1, Pete Carroll goes for it. On 4th and 3? He probably punts. You’ll see that issue in the GIF at the end.

One more element to look at. Again, the coverage. Similar routes, outside the numbers, with the Steelers playing man under. Eyes are on the receivers, not the quarterback.

If your defense is playing man, the QB will have a better chance to leave the pocket. If it’s zone, eyes are on the ball, and they’re quicker to react. 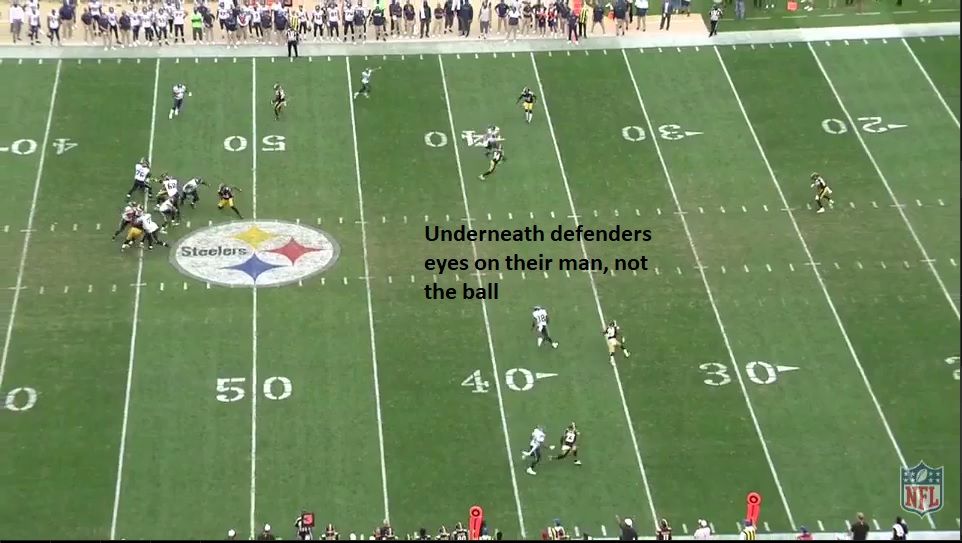 It’s just disappointing all the way around. Huge moment of the game. The Steelers knew Wilson was a threat to run in those critical moments. Keith Butler said it himself leading up to the week and hey, even we wrote about it in our Seahawks’ scouting report.

“There’s a couple zone reads with Russell Wilson, always a threat to run, but they’re obviously making sure to protect him too. Watch out for it on 3rd down in a critical situation, a “gotta have it down,” but that’s about it.”

Yes, in hindsight, a true “spy” probably would’ve been the way to go. But even without, the small mistakes made in rush-lane integrity proved costly. Talented, veteran quarterbacks like Wilson will make you pay. They know how to close out games. The Steelers’ defense? Not yet.