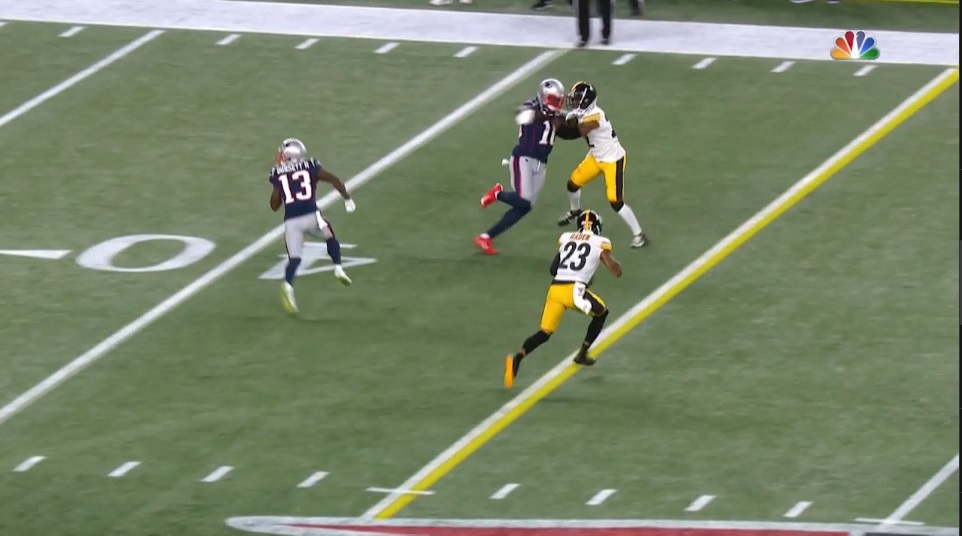 Under Dick LeBeau, it was easy for the New England Patriots offense to pick apart the Pittsburgh Steelers’ defense. LeBeau had a largely static gameplan in coverage. Cover 3, zone off the corners, don’t get beat deep. Tom Brady knew how to attack that. He had no problem with nickel and diming his way down the field. The scheme was tailored to the quick game. He’d throw the five yard curl again and again and again until the defense attempted something different.

That scheme has changed. The Steelers are no longer that kind of team. They play a lot of man coverage. A lot less spot dropping. And that’s how the team held New England to just ten points in last year’s victory.

But you knew this time around, Bill Belichick was going to adjust to what Keith Butler did. And if the Steelers were going to run their man-heavy scheme, the Pats were going to run plenty of man-beaters to take advantage of that. Sunday night, that’s exactly what you saw.

They did it in two different ways. Combination routes to create natural picks and rubs and motion to ID the coverage pre-snap.

Great example here early in the game. Empty set for the Patriots. Devin Bush walks out to cover RB Rex Burkhead (#34). A LB who walks out, by the way, and ditto with Mark Barron at the top, is a sign it’s man coverage.

Motion Burkhead to reduce his split and he runs a slant route to the middle of the field. The TE is running to the flat, creating a natural pick between the two. Bush slams into the tight end, giving Burkhead tons of space, and Brady hits him for a first down.

Same idea a handful of plays later. Motion the WR across the field, CB Joe Haden follows, and you know you have man coverage. Another slant/flat combination, forcing Haden to work over the top. Go under and you risk trailing and stay on the same level as your teammate and you’re going to run into the pick, as Bush did above. Haden has no choice to give ground and go over the top, allowing enough space for the 3rd down conversion in the process.

No pick play here. But again, Pats working out of empty. LB Barron on RB James White. Motion #10 Josh Gordon across the formation. Those two pieces of information tell you it’s man coverage. White runs a pivot/option route, stemming inside and then breaking outside, creating space and picking up the first down.

Same idea here. Two backs on the field, Burkhead and White. Motion Burkhead out, Bush follows, tells you you’re getting man coverage. White runs a speed out to the left side, matched up on Barron, and Brady hits him for another conversion. Option route by the back, using his leverage to beat the linebacker.

Anytime you play the Patriots, you’re in a tough spot. There are no easy answers and I don’t envy any defensive coordinator who has to try and solve it. But Butler took the path of doing the same things as last time when everyone knew the Pats were going to learn from their mistakes and counter the Steelers new looks. And they simply had no answer with either a better gameplan or superior personnel.