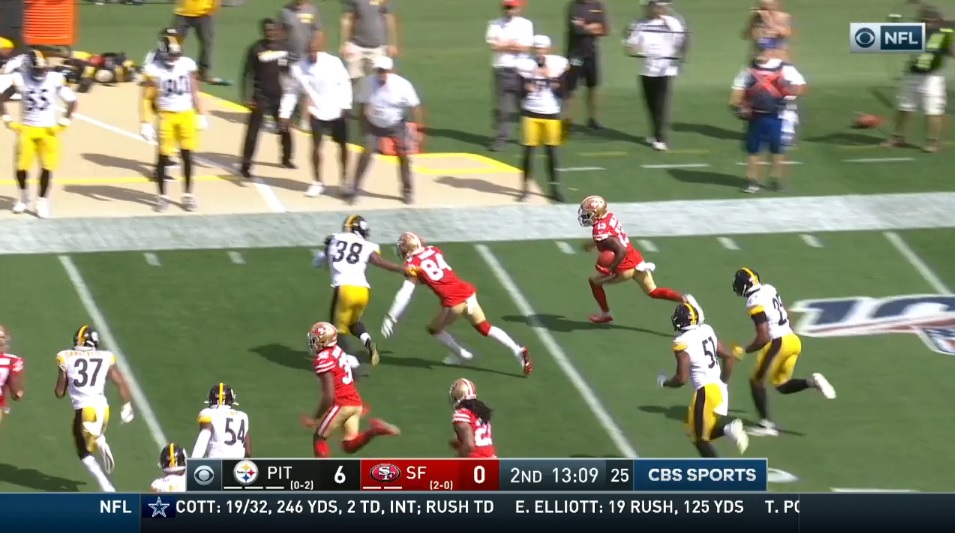 Week One was a good start for Artie Burns. I liked his body language and more importantly, his play on special teams. But last week felt the opposite, at least, for the latter. Burns had one of the toughest days I’ve ever seen from someone on special teams and it was so bad he was benched by the end of it. So let’s look at all the hidden yardage given up.

Playing the role of gunner and running down punts isn’t easy. You’re defending a lot of space, trying to tackle a returner usually deemed a playmaker and top athlete (enter your Ryan Switzer joke here), while finding the ball and fighting through contact.

But Burns’ results are simply poor. He routinely struggled to contain the returner and make the tackle, the two main duties of the role. Here’s the first one. To the right, Burns works hard to fight through the double-vice by the pair of 49ers’ jammers.

But he takes too sharp of an angle in trying to do so and overlaps too much in the gap with his teammates. As returner Richie James cuts back to the right, Burns loses his contain and allows the cutback lane. Jaylen Samuels does a nice job to keep the cup (contain), slow the return up, and Burns at least works hard to retrace his steps and make the tackle. Had Samuels not done his job, this is a big return. Possibly a TD.

In all, it’s a 53 yard punt and a 15 yard return. Net of just 38 yards, a terrible number (the goal should be at least 42 net per punt). And it should’ve been a short return and huge play for this unit.

Next one. Burns first man downfield, beating the single jammer (which every good gunner is expected to do). But he whiffs on the open field tackle, again letting James win the edge and picking up a lot of yards.

Burns runs into the same problem here. First man down to make the tackle and misses again. Gotta use the sideline to his advantage and get the returner out of bounds. As Dick LeBeau used to say, the sideline’s never missed a tackle. Whiffs and James gets a nice return out of it.

On these three punts, Jordan Berry averaged a healthy 52.7 yards per punt. The net though? Just 37.7 yards, a number that misses the mark.

And Burns may have been benched because of it. Justin Layne made his NFL debut late in this game, including taking Burns’ spot as the left gunner on this 4th quarter return. 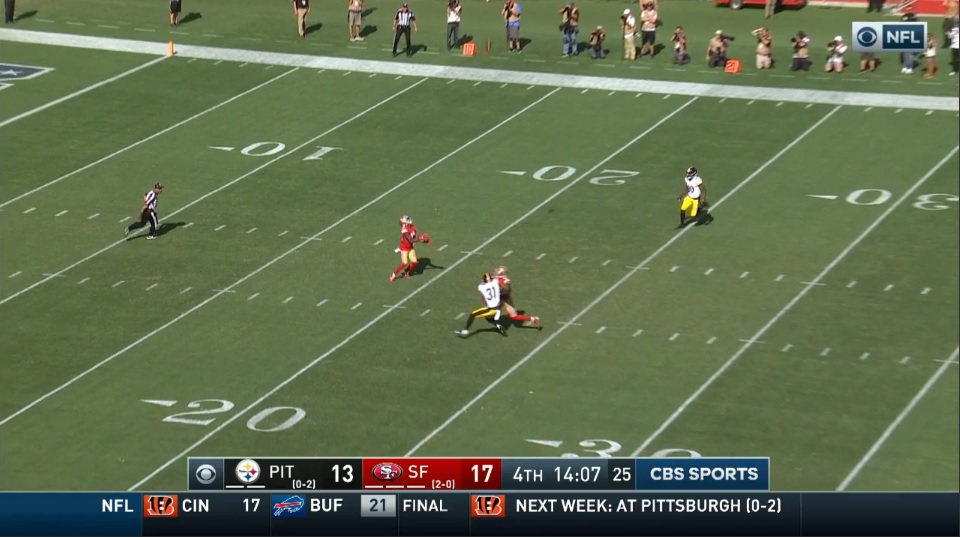 The only reason why I qualify it is because Layne also replaced Johnny Holton – the other gunner – on the punt before. Holton may have struggled too, the whole coverage unit did, so it may have been a signal to both, but I suppose it’s possible this was a planned thing considering Layne had fresh legs for late in the game.

Regardless, Burns didn’t play well objectively speaking and didn’t do the coverage unit any favors. Through three weeks, Berry is actually 9th in punting average (47.5 yards per punt) but he’s tied for 20th in net with a 40.5 average. While there are a lot of factors involved here, including good weather allowing for more returns and the fact Berry is booting more “open air” punts that allow for returns (as opposed to placement punts when the Steelers’ past potent offense at least moved the ball), the coverage unit needs to show improvement.

They’ll face the Bengals’ Alex Erickson on Monday night, an excellent return man whose had success against the Steelers before. So Burns and the rest of the unit need to tighten the screws.