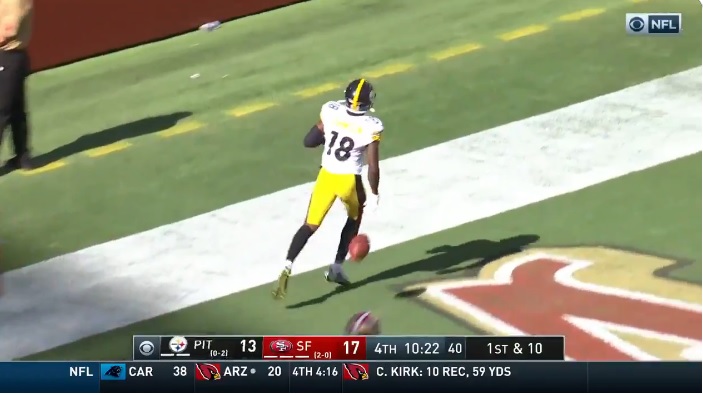 Receiving five turnovers with a quarterback making his first career start is as good of a helping hand as a team can ask for. Unfortunately, despite the San Francisco 49ers committing five turnovers, it was still not enough for the Pittsburgh Steelers to escape the west coast with their first victory of the season. Even with a late resurgence by Mason Rudolph and the offense, the Steelers were unable to hang on, surrendering a go-ahead touchdown with just over a minute left to go to drop this one 24-20.

The Steelers picked off two passes, recorded five turnovers, won the turnover battle and held the 49ers to a 50-percent clip in the red zone. Surely, the Steelers were following the recipe for victory but Rudolph and the offense’s inability to capitalize really let this team down.

Rudolph was 14/27 for 174 yards with two touchdowns and one interception but the Steelers were doomed by their inability to take advantage of the defensive turnovers. The Steelers were gifted turnovers all afternoon, but it was a costly turnover of their own by James Conner that gave the 49ers enough life to pull this one out.

With just over a minute left, Jimmy Garoppolo erased any memory of the five turnovers as he found Dante Pettis for the game winning touchdown pass. The come from behind victory ruined what was an otherwise promising start by the defense.

It looked like the Steelers were in for a treat early as it only took a couple minutes for T.J. Watt to intercept a bobbled pass and record the Steelers’ first interception in a 273 days and another came shortly after.

Minkah Fitzpatrick showed exactly why the Steelers traded a first-round pick for him as he was all over the football during Sunday’s game. In his first quarter as a Steelers, Fitzpatrick was able to pick off a Garoppolo pass but just like the Steelers’ first turnover, the Steelers were only able to tally a field goal and go up 6-0.

Fitzpatrick was not done yet as he forced a red zone fumble on the 49ers’ next drive. The newly traded for safety recorded as many turnovers in just over one quarter of play as the Steelers had throughout their first two games. The turnovers would not stop there as a botched snap led to a Devin Bush fumble recovery on the 49ers’ following drive.

Despite recording four turnovers, the Steelers still only led 6-0 as the offense failed to do much. Garoppolo was finally able to put together a scoring drive together as he found teammates George Kittle and Kyle Juszczyk to put the 49ers in position for a Robbie Gould field goal.

Rudolph and the offense struggled heavily out of the gate. The offense did not convert their first third down until midway through the second quarter as the ground game and passing game failed to gain much steam. Rudolph also struggled with accuracy as more than a few of his passes went off the mark. Through the first two quarters, Rudolph completed just 8/15 passes and mustered just 40 passing yards.

Things only got worse on the Steelers first drive of the second half as Rudolph forced an errand throw into a tight window and was intercepted by K’Waun Williams. The 49ers did not hesitate and finally took the lead shortly after on a one-yard touchdown plunge by Jeff Wilson Jr. to give the 49ers a 10-6 lead.

While the first half was a defensive showdown with both teams bending but failing to break, the second half was far from it, as both teams went blow for blow.

JuJu Smith-Schuster reminded this Steelers’ offense that there is still a big amount of talent left on this team, as he took a pass from Rudolph 76-yards to the end zone. Smith-Schuster was held to just two catches for five yards before this gain but he provided a quick spark for an otherwise dead offense, giving the Steelers a 13-10 lead. Smith-Schuster would finish with three receptions for 81 yards.

The 49ers answered back just as quickly as the Steelers responded as Garoppolo put together a 10-play, 75-yard drive to give the 49ers a 17-13 lead. It was once again Wilson, who scored the touchdown, his second of the day, though this one came from the four-yard line.

In his first start, Diontae Johnson showed why the Steelers brass loved him so much during the pre-draft process. With the Steelers trailing by four, Johnson gave the Steelers back the lead, catching a 39-yard touchdown pass midway through the fourth quarter.

Unfortunately, after the 49ers spent majority of today’s game shooting themselves in the foot, the Steelers also gave it a go as a critical fumble by Conner led to a Dante Pettis go-ahead touchdown grab with a just over a minute remaining.

While Smith-Schuster and Johnson were able to put together a fine showing, Conner’s effort really left a lot on the table. He averaged just 3.3 yards per carry and fumbled when the Steelers had a chance to seal the victory. That fumble was a costly one as the 49ers did what the Steelers could not do all day – capitalize.

With victory being handed to them throughout the game, the Steelers managed to snatch defeat from the jaws of victory and fall to 0-3 for the second time under Mike Tomlin.

The Steelers are set to take on the Cincinnati Bengals at home for a special edition of Monday Night Football next week. The silver lining for this matchup is that it is an almost guarantee that one of the teams will leave with their first victory.